Years ago when I lived in town I was out walking the dog when I noticed some red raspberry vines growing through a fence and trailing nearly out to the sidewalk.  Over the next couple of weeks the berry flowers blossomed into a ton of beautiful red berries that seemed abandoned as they began to rot!  It felt harmless enough to help myself to a handful that would otherwise go to waste. 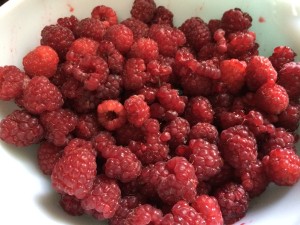 Even then I had trouble with limits when it came to berries!  Within days, I was toting along an old Cool Whip container and full out picking while Sampson stood sentinel in the dusk.  Darrell was the voice of reason but I knew which of his scavenger buttons to push and it wasn’t long before he was tagging along.

We tossed around the idea of knocking on the door to ask permission but rationalized it away.  If the owners were home why wouldn’t they be picking the berries? Besides, weren’t the berries technically on public property…or at least close enough to it?

In the light of day, I found myself feeling a little guilty and wondering whether or not I might lose my job if I was arrested for my night-time foraging.  Where was my self-control? Over lunch in the teacher’s room, I found myself confessing to whoever would listen.

“Where are the berries?” our school secretary asked.  I was evasive but she was persistent and I broke far too easily.

“Those are my berries!” she laughed.  “Pick anything outside the fence you want.  I have my hands full with the ones in the yard!”

I was dumbfounded, embarrassed, and absolved of my sin all at once.

“In fact,” she offered, “you could take some of the canes and plant them in your yard.”

As soon as Darrell and I moved into the farmette, we did exactly that.   We’ve been in red-raspberry-heaven since. 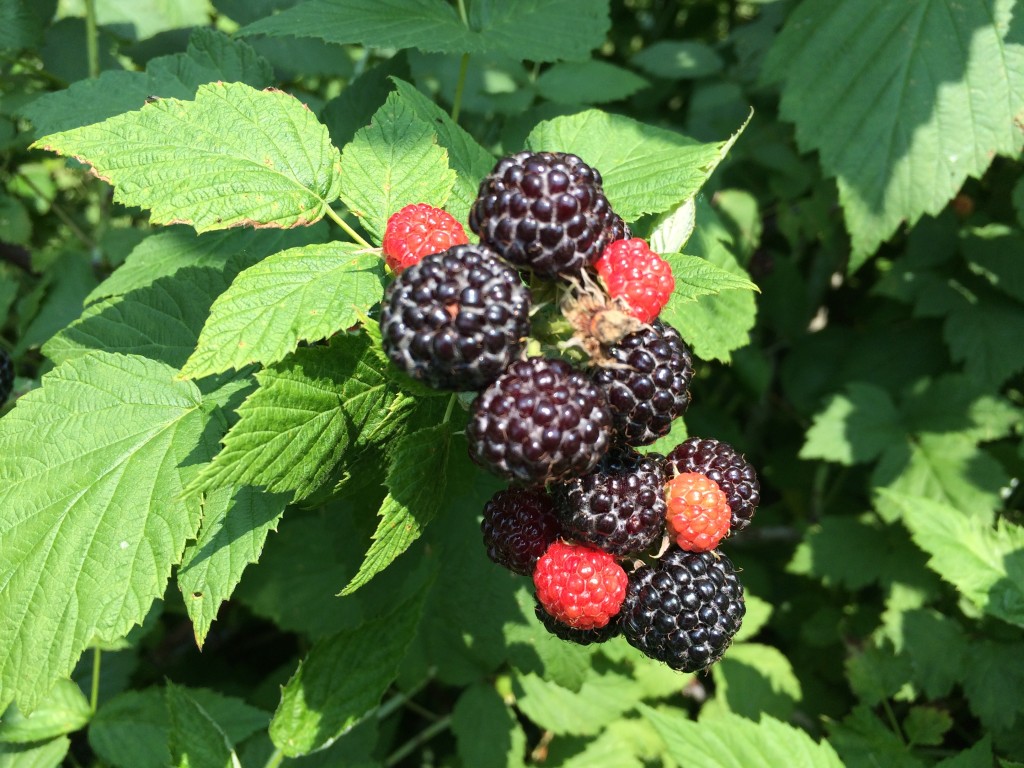 They are only outdone by our black raspberries which, by the way, didn’t come to live at the farmette due to late night re-con missions but because of a generous neighbor Darrell met at his weekly basketball game.  Like us, they’re transplants!

Rather than not having enough raspberries, our new dilemma is what to do with them all! 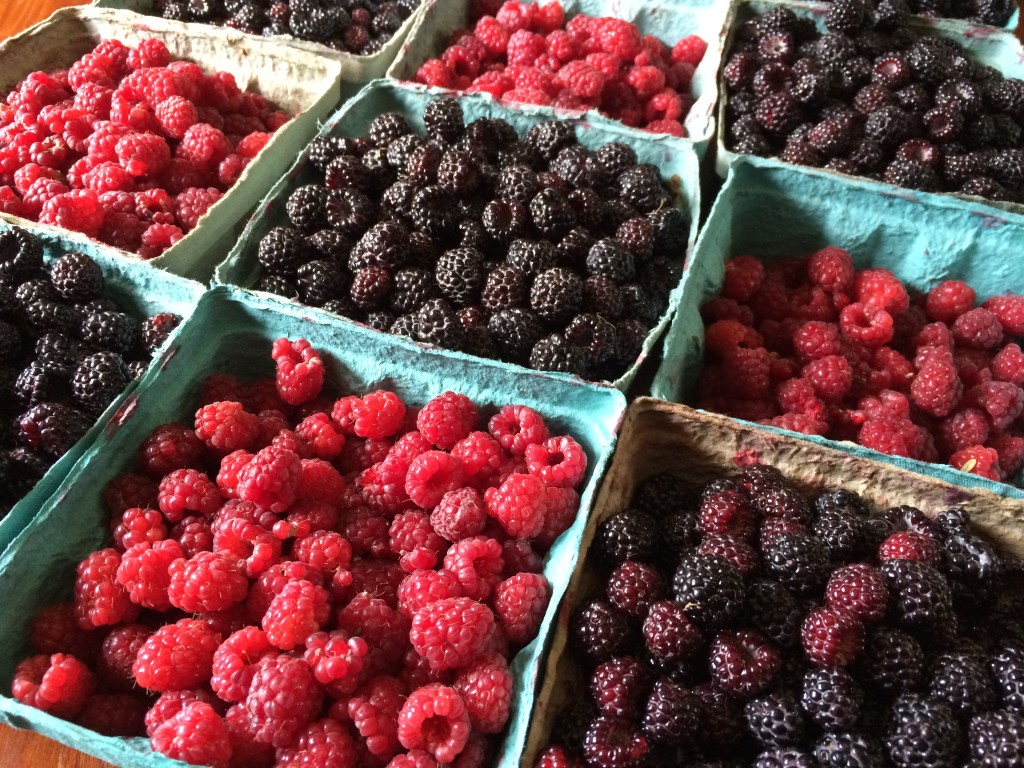 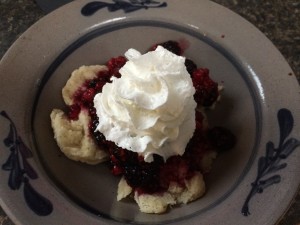 Who knows how many consecutive days Darrell will keep eating???

Of course we make the obligatory batches of jam.  Darrell is also up to 17 consecutive days of eating biscuits smothered in berries and there’s no real end in sight.  He just keeps eating!  After all, red raspberries have a short shelf life before they start to mold.  Black raspberries, in our opinion, don’t freeze well.

Because of the abundance, last year I started experimenting with black raspberry juice.  In mid-winter when we pulled it out of the freezer we deemed it “the magic elixir.”  It was that good.

Imagine my dilemma as I stood overlooking the berry patches last Saturday morning planning a trip to the public market. The vines were dripping with berries

that needed to be picked!  I “needed” to get to the market because over the winter Darrell and I had stumbled on a vendor whose table was loaded with flavored balsamic vinegars to sample.  Never one to turn down a free sample of anything, I picked up a bread cube and started dipping. I would have tasted them but when I got to the Fig Balsamic I was smitten.  I forked over $8.00 and stashed a bottle in my bag. 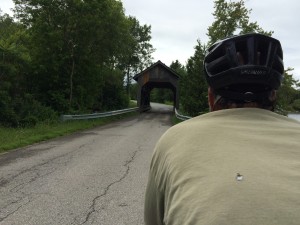 Tandem riding through Vermont covered bridges! More on this trip coming in a future post….

Many more bottles followed and I was on my way to get another! Lurking in the back of my mind though was the commitment Darrell and I have to harvest what we can to carry us through the winter.

Our harvest was looking me straight in the eye.

On top of that we were already behind in the amount of fruit we normally squirrel away because we had been bicycling through Vermont for part of the strawberry season. Was I really going to cave under the possibility of another bottle of fig balsamic?

Standing in the driveway, I thought of a quote I heard in a great documentary on Nicky Winton I watched just this week.  “If something isn’t blatantly impossible then there must be a way of doing it.”  Given that it was at least plausible that I could concoct some of my own flavored balsamic vinegars, wasn’t it?

For those of you who read my blog regularly, you know that here at the farmette we like to Keep it Simple.  There’s an undercurrent in our culture of never enough.  Darrell and I can get caught up in it just like everyone else and have to stop when we find ourselves so busy looking for what we don’t have that we forget what we already do have!  (…and we have raspberries!) 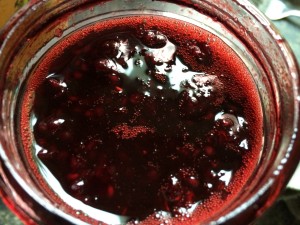 I put the car keys away and went to the berry patch instead of the market. I spent the afternoon experimenting with both black and red raspberry vinegars which are steeping now.  I imagine I’ll eventually get another bottle of the fig balsamic but living at the farmette helps me keep life in perspective. We’ll use what we have first.

My raspberry balsamics are already on their way to delicious and I know they’ll make a great base for salad dressings or dipping oils down the road! Here’s the recipes I’m playing with:

Barely cover the berries with water and simmer.  (From everything I’ve read, boiling has the potential to change the fresh flavor of the juice so I stick with about 190 degrees.)

Strain through cheesecloth or jelly bag.  We’ve let ours drip overnight by suspending it and also just squeezed and twisted the berries in small batches in the cheesecloth.  Both work.  Consider rubber gloves or you’ll be sporting purple-dyed fingers like I do.

Sweeten to taste with sugar, honey, or maple syrup.  If you freeze it in jars be sure to fill beneath the shoulder of the jar.  For canning, simmer in a hot bath (about 190 degrees) for 30 minutes.

Note:  You can also make more of a concentrate by simmering just the berries with a minimal amount of water.  Freeze or can the concentrate.

Use a good balsamic.  I used Colavita because I had it but later found out that America’s Test Kitchen suggests Pompeii as a budget friendly alternative to the more expensive ones.  I’ll do batches with the Pompeii, too, and then give my own taste test to Darrell and the kids! 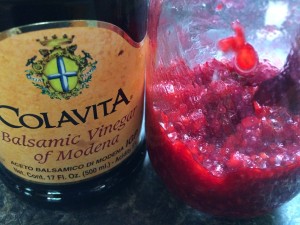 Fill a pint jar ½ way up with berries and then crushed them a bit to get the juices going.

Fill the jar with balsamic vinegar.  Stir gently once a day for at least a week, longer if you like.  Strain through cheesecloth.

To can this (4 ounce jars would make great gifts!) place it in sterilized jars and process in a boiling water bath for 10 minutes.

*Note: I’m planning to reduce mine a little by simmering it once I strain it.  I’m not sure yet whether it’ll need a little sweetener at that point.  I’m going to see how it compares to the fig balsamic I’ve been feasting on all winter.  Follow this experiment on Kneading Life’s Facebook page!

Note #2: We also have a lot of herbs growing outside the garden gate.  Inspired by the balsamic brews, I tucked some tarragon, lemon thyme, and lime basil into some white wine vinegar.   I’ll leave it for a couple of weeks and then strain them out.  YUM!

Why not bake up some No-Fail-Anybody-Can-Do-It Focaccia to dip into those delicious balsamics or try the Roasted Veggie Pizza with Maple Balsamic for a great summer dinner on the porch?

Hope to see you around the bread bowl or maybe even back by the garden gate! Since the currants are nearly ready to pick here, too, I’ll have to start in on them next! With blueberry and peach season on the horizon, i hope you’ll share any of your own experiments or tried-and-true recipes!

PS:  I’ve been toting this little card around since I was in college….seems after 30 years I’m still working on it!

2 thoughts on “A Berry Dilemma”