A lot of things get conjured up in my mind as soon as I hear the word pumpkin!  It’s an affectionate nickname I’ve given to little ones in my life, brings me right to the Thanksgiving table, and makes me a little melancholy whenever I think about our family trips into the pumpkin patch when the kids were little.  Knowing they had to be able to get their pumpkin out of the patch, their dad and I would often stand back and laugh as they did whatever it took to carry, roll, or push the pumpkin they’d chosen out of the patch. 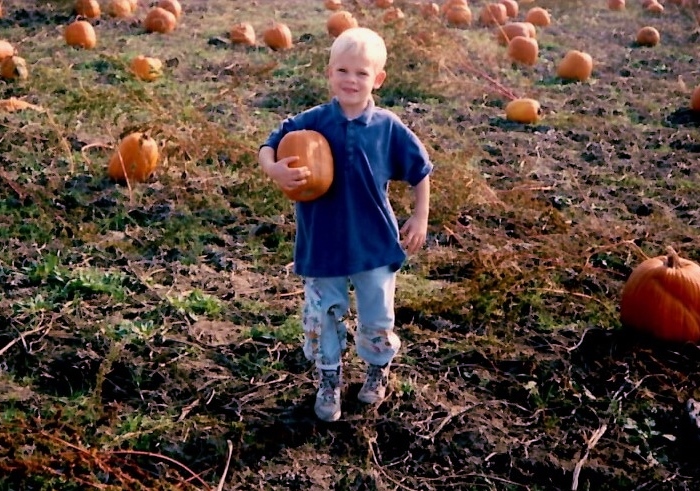 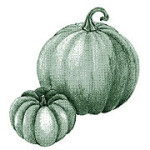 I was surprised to learn that most scholars agree pumpkins started in South America more than 7000 years ago!   In America, most of us only think as far back as the lore around the first Thanksgiving between the pilgrims and the Native Americans.

As it turns out they probably weren’t eating pumpkin pie in the early settlement.  They didn’t have ovens or the flour and sugar needed for a crust.  More likely, the settlers filled a hollowed pumpkin shell with milk, honey, and spices then baked it in ashes. (YUM!  I’d love to try this.  Being that it would involve food, I’m sure I could wrangle Darrell into helping!)

This campfire-style pie might give me a new appreciation for pumpkin.  Maybe, like the early settlers, I don’t give it the credit it deserves.  It took a harsh winter and the loss of nearly half the settlement due to scurvy and exposure for the settlers to give pumpkin its due.  Pumpkins have become an integral part of our lives!

And it isn’t just the Thanksgiving table where pumpkins take a front seat.  They show up on many doorsteps when Halloween rolls around.  The History Channel credits the jack-o-lantern to a 17th century folktale from Ireland about a guy named Stingy Jack who tried to outsmart the Devil.  In the end, Stingy Jack was given one glowing coal, which he placed inside a hollowed out turnip, and was forced to wander by the light of it for eternity.  “Jack of the lantern” eventually became “jack-o-lantern” and the legend and tradition came to the shores of America with Irish immigrants.

Recipes for pumpkin this-or-that started flooding the internet weeks ago. Darrell couldn’t resist a pumpkin chocolate chip cookie recipe that looked amazing.  It wasn’t the best cookie he ever made and definitely wasn’t worth a second batch so that left us with about half of a can of pumpkin in the fridge. 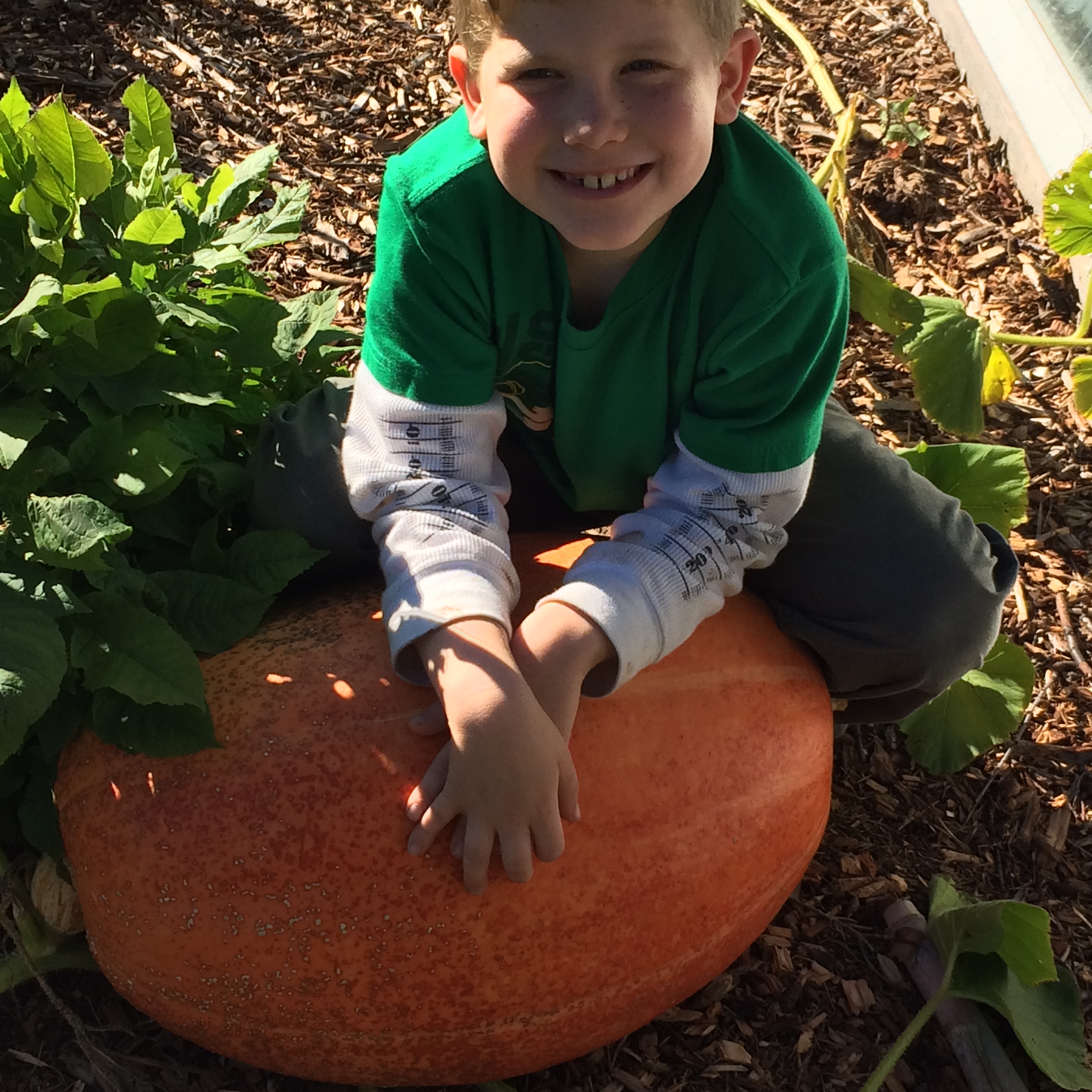 Good thing Darrell hadn’t chopped into the 42 pound pumpkin from our own patch or we’d have really had leftovers!

I quickly learned we weren’t alone when I noted a Facebook post my cousin, Cindy, had written about the very same predicament.  What exactly do you do with leftover pumpkin? I wasn’t about to let all those antioxidants and Vitamin A go to waste!

I decided to start with the tried-and-true recipe for Honey Wheat Bread that I wrote about in The Bridal Edition post.  I adjusted the amount of liquid to accommodate for the pumpkin (which I counted as a wet ingredient).  I added in a little extra honey and opted for bread flour thinking that with the heaviness of the pumpkin the extra gluten might be needed if I wanted a sandwich bread.  It came out great though there wasn’t really any pumpkin flavor of note! 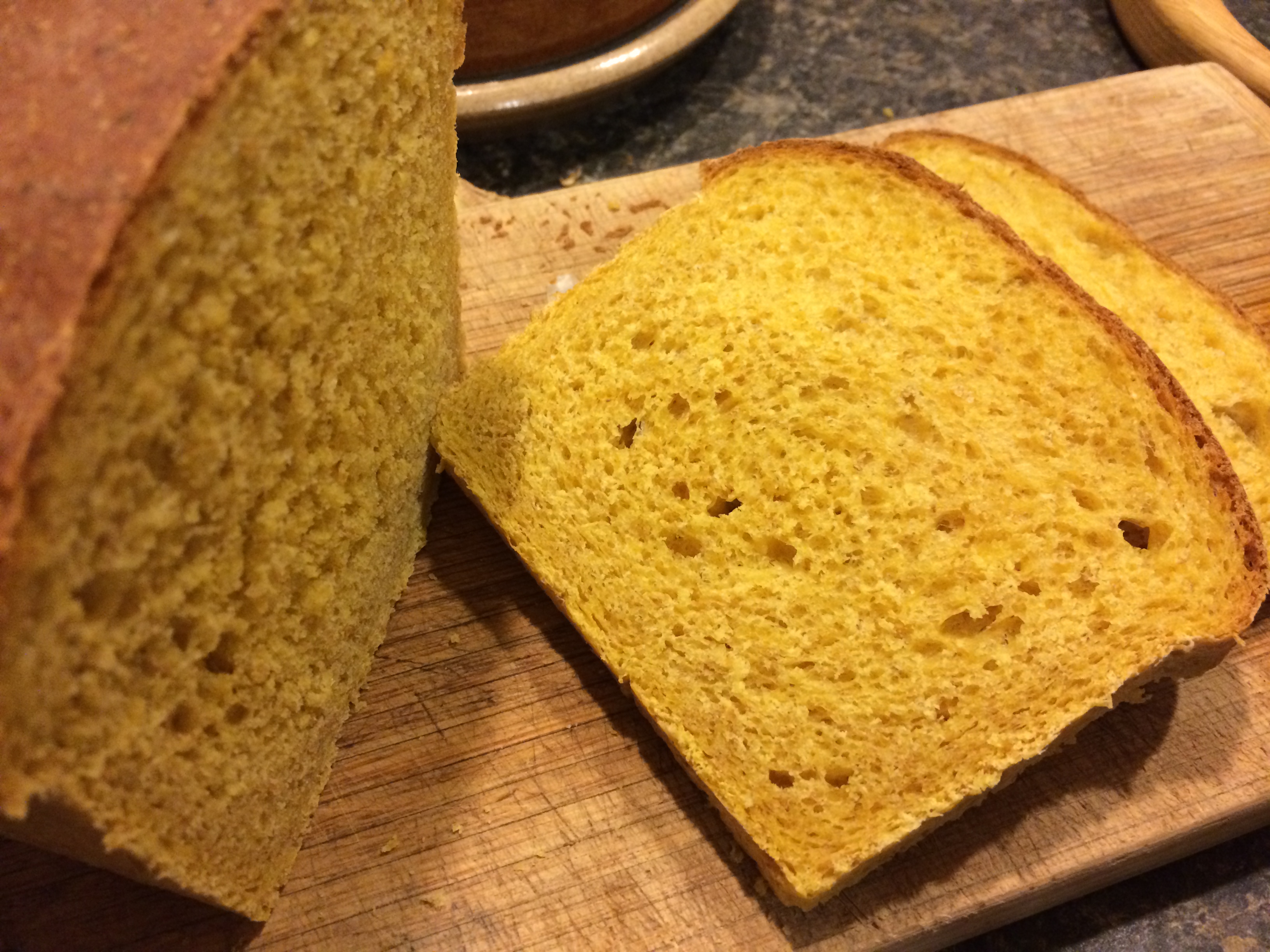 In my second attempt, I used an organic pumpkin and was surprised that the beautiful orange color wasn’t the same.  Not deterred, I rolled one of the loaves into a cinnamon raisin loaf and it still tasted awesome!  The other one I topped with pumpkin seeds just for good measure! 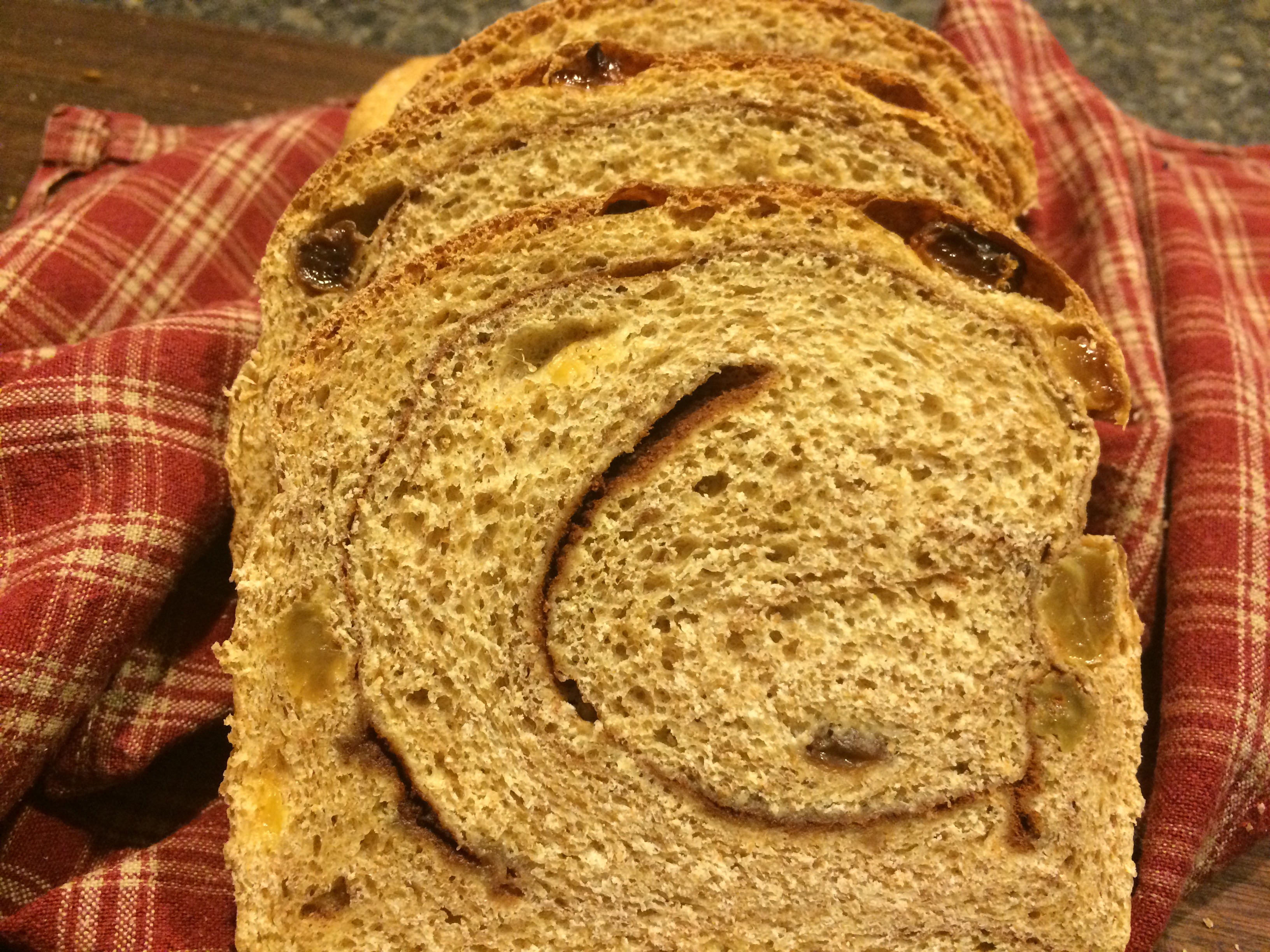 Using up what we have (pumpkin included!) and keeping life simple are still great rules to live by.  Check out my Scavenger Bread to see what else I’ve found in my cupboards and added in!  If you live by these rules (or live with someone who finds a use for everything) you might also enjoy my post Tinker Away, Darrell….

Hope to see you around the bread bowl one day soon! 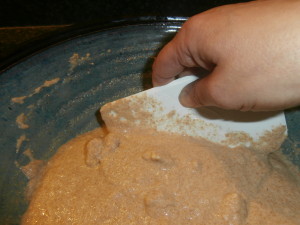 I love these little plastic mixer-scraper tools for getting the dough together.

Mix the whole wheat flour, honey, shortening, salt, yeast and water in a bowl. Beat on low speed with an electric mixer for 1 minute, then medium speed for another minute. (I don’t use the mixer, I use my favorite little plastic mixing thing pictured here and then just let it sit for about 5 minutes to start the gluten development and soften the wheat bran a bit). Afterwards stir in enough all purpose (or bread) flour a cup at a time to make the dough easy to handle. 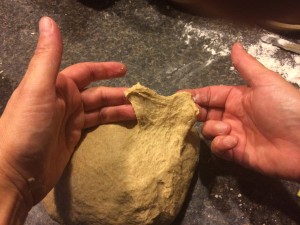 You can see that it’s not dry; it has some stretch in it

Knead the dough for about 10 minutes (reflect on what you’re working on in your own life at the same time.) You’ll feel the texture of the dough begin to change and get smooth and springy (maybe in the process your life will, too!) The dough should be Post-It note tacky, but not sticky.  Resist the urge to over flour it.

Place the dough in a greased bowl and cover with plastic wrap. Let it rise until doubled in size (about 40-60 minutes). 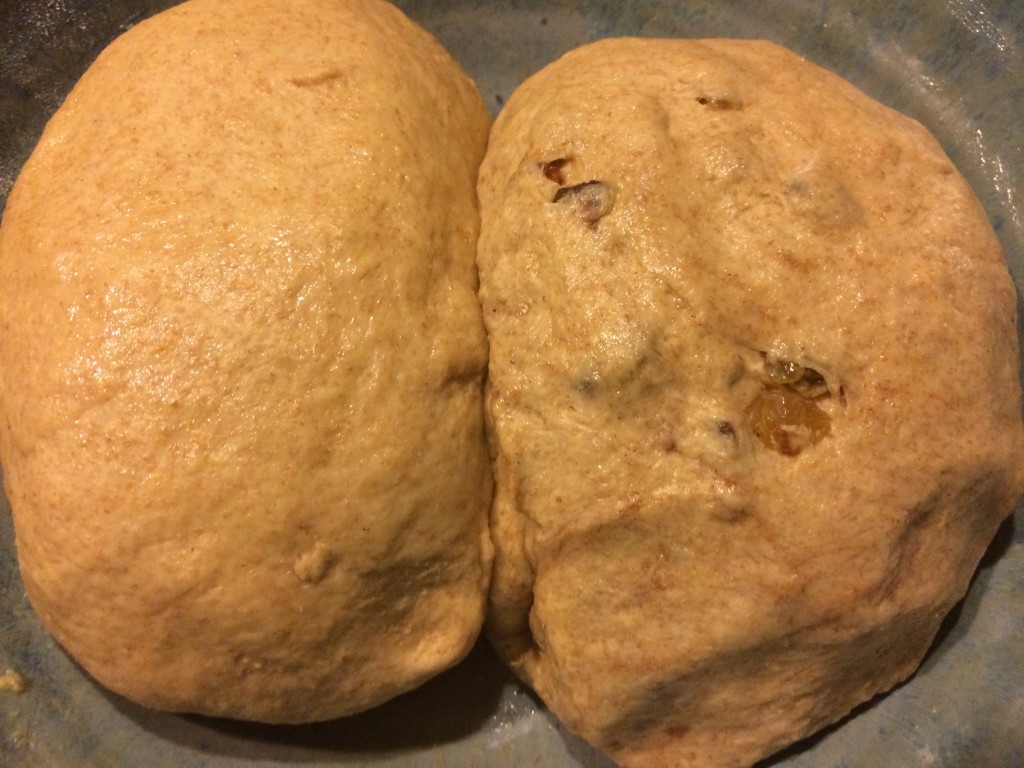 Grease 2 pans (either 8 by 4 or 9 by 5) with shortening or cooking spray.  (I always use butter because it’s what we have in the house and it works great..)

Gently deflate the dough (who wants to be punched down?) and divide in half. Flatten each half into a rectangle about 18 by 9 and roll it beginning at the 9 inch side. Press with thumbs to seal after each turn and pinch edge of dough when you finish.  Put it seam side down in the pan. 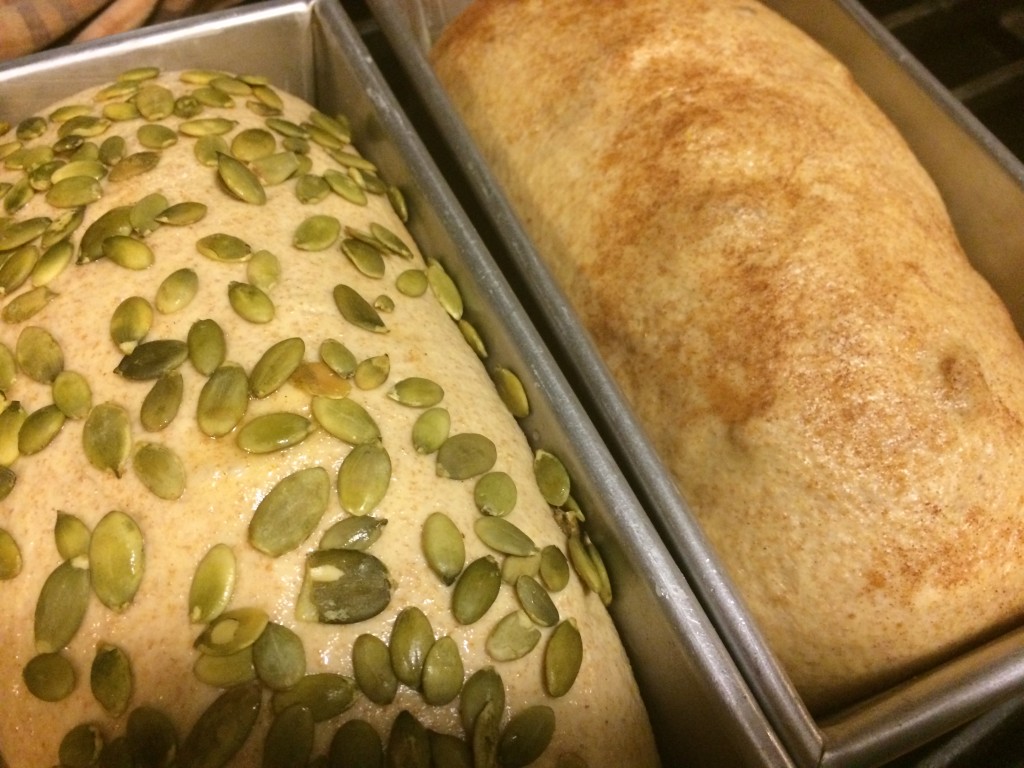 At this point you can just cover it with plastic wrap or brush the loaves lightly with butter first and or add fun stuff to the top (I added pumpkin seed).  Let it rise another 35-50 minutes.

Move the oven rack to low position so that the tops of the pans will be in the center of the oven and preheat to 375 degrees. Bake 40-45 minutes or until loaves are a deep golden brown and sound hollow when tapped.  Remove from pans to wire rack and cool.  Remember if you cut hot bread it’ll be gummy on the inside….try to just enjoy smelling it for a bit!

Have you read one of my favorite posts about Saturday Morning Rituals?

One thought on “Hey Pumpkin!”