My grandmother, Maria Tuttolomondo, likely around the time she emigrated from Sicily to America. Could this be her wedding dress?

My friend, Sandie, Facebooked me a recipe for a Sicilian fig cake. In the course of our friendship we had discovered that our families had both emigrated to America from the same part of Sicily.  The recipe for Buccellato-Cucciddato originated 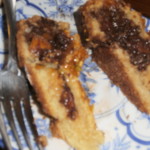 After seeing the recipe, I knew it would just be a matter of time before we got together to make one (or two as it turned out)!

I know that I’ve written only about bread on my blog, and granted this definitely wasn’t bread, but there were plenty of things to learn in the process just like there always is with bread.

Different than the quiet pondering I do when I’m alone in the kitchen, there was lots of laughter. It was fun to consider possibilities together. “Does it make a difference if we substitute in butter for the lard the recipe calls for?” Sandie wondered.

While I didn’t think that it mattered, she wasn’t convinced so there was only one option.

We made two.  One with butter.  One with lard.  Darrell would be our taste-testing guinea pig at the end of the day.

Then there was the matter of the flour, regular 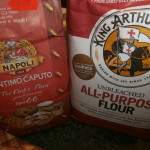 Final decisions were made.  We paired the Italian flour with lard and the all purpose white with butter.

There was no keeping it simple with this recipe.  There were figs, raisins, an assortment of nuts and a huge array of other ingredients.  I think I could have been content just sampling ingredients all day if we hadn’t had such a clear vision in mind.

I chopped, grated, mixed (and tasted) right alongside Sandie as we caught up on life and the challenges and joys it had brought since we’d last been together.

Instead of tending bread, we tended each other. While filling cooled and dough rested, we stopped for coffee, lunch, and even a little Marsala. 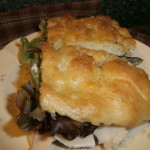 Keeping with our Sicilian theme we filled focaccia, fresh from the oven,with salami and provolone.

What started out as a tiny seed of an idea turned into a full day event.  We ended up with a couple of beautiful buccellato-cucciddatos, but by the time the last dishes were being washed, I was contentedly down for the count. 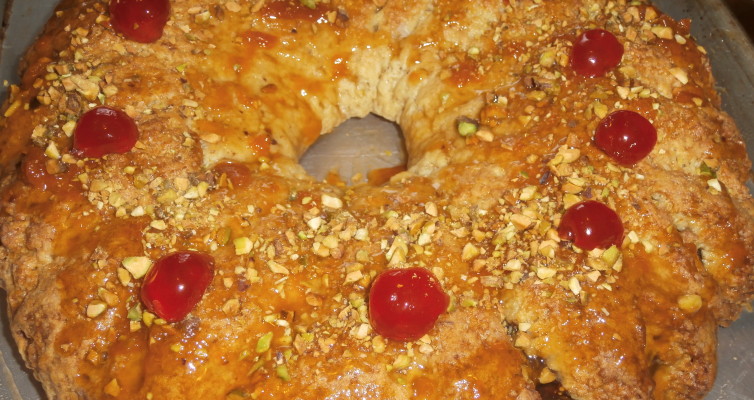 Sitting by the woodstove as dusk settled in, I got to thinking about how different cooking with someone is from cooking for someone.  I love to do both but there is something special that happens when I lay down the busyness of all that needs to be done in favor of being fully present with someone in the kitchen.

Magic happens and it acts like a magnet. Even Darrell ended up in the kitchen with us!

I’m convinced that magic happens when people put their hands together to prepare food.  If you have any doubts watch the short video on the Kneading Life Facebook page of Sue making Peach Salsa with her family gathered around. (Dec 14 post date)

If you haven’t in a while, why not call up a friend, make a date, and do some cooking together?  Put on the coffee or crack open the wine.  Tend each other as you tend to the food. Throw in a focaccia when you start and you’ll have great bread by lunch!

You’ll be glad you did.

I’m off to Massachusetts for February break later this week. Darrell will be putting in wood floors for our good friend, Nancy, while she and I experiment with her grandmother’s rye limpa bread in the tulikivi!  Who knows what else we’ll have our hands kneading?

I hope at some point we all get to gather in the kitchen to create some….well…magic together!

One thought on “Magic in the Kitchen”