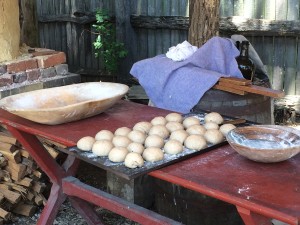 I recently wrote about the 18th century bread baking in colonial Williamsburg which made me appreciate (again!) the idea of going by feel, tuning in to my senses, and working with what I have.

When one of the cooks (you may recognize Tiffany from my last post!) started pulling out ingredients to make a chocolate-rye bread pudding, she had my rapt attention.

Since she was loosely following a receipt (recipe) written by Eliza Smith in the 1750s, she grated, rather than cubed, a half-pound loaf. 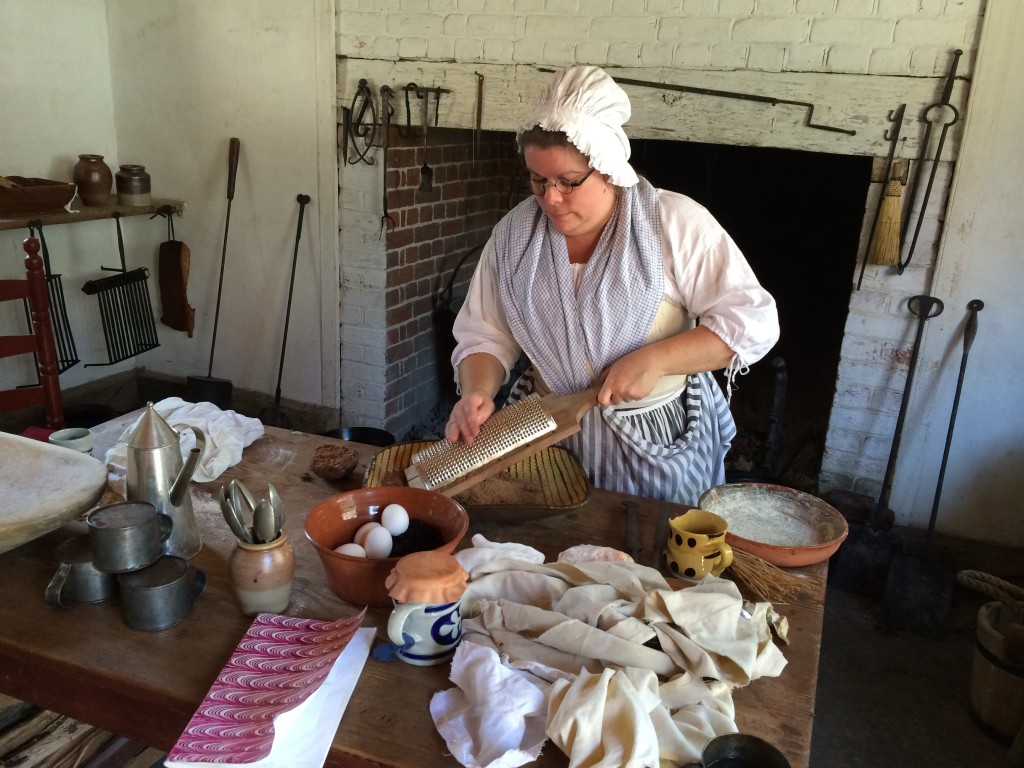 With the grating done, eggs, sugar, a whole grated nutmeg, and some finely chopped suet went into the mix.  Probably like many of the visitors to her kitchen, I wondered about the suet. 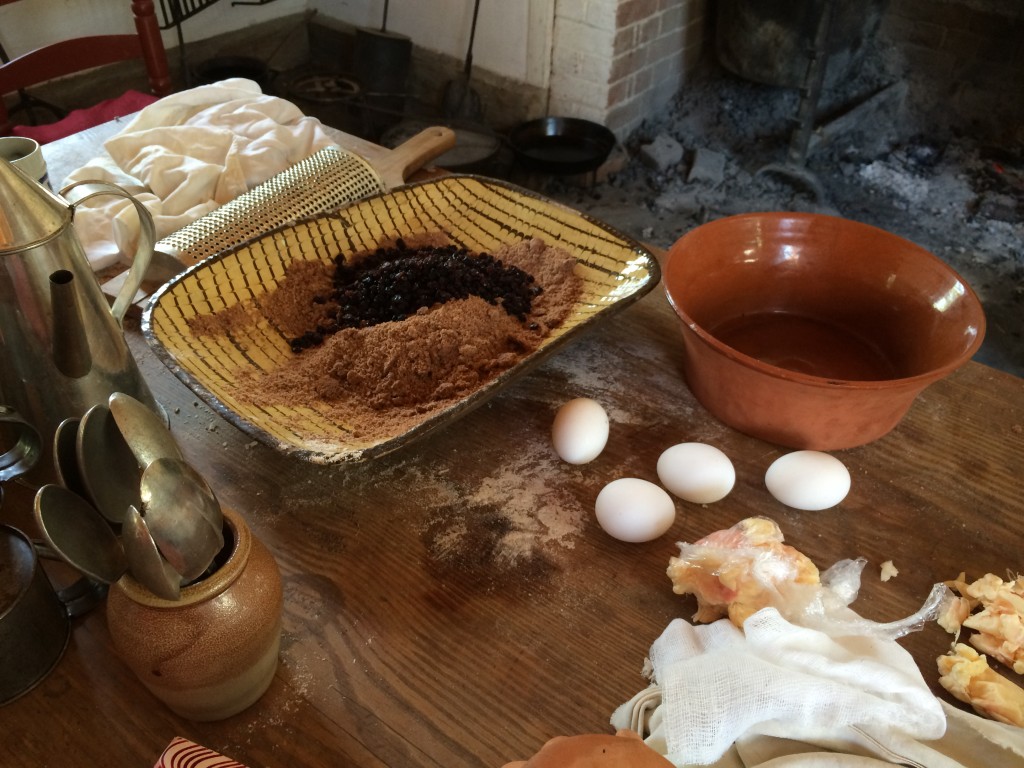 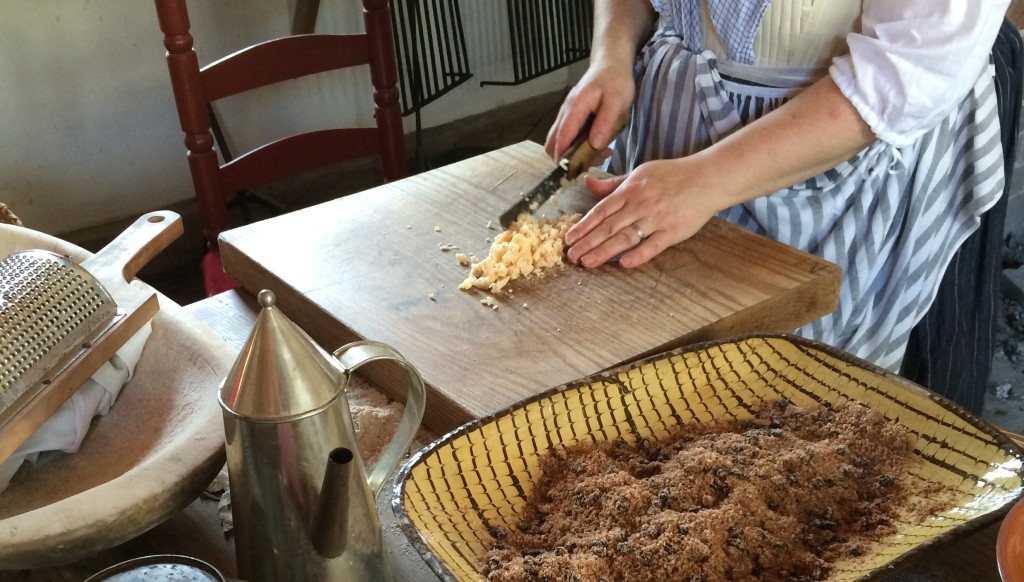 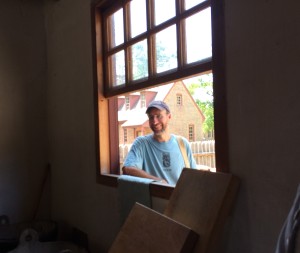 Darrell watching from the armoury kitchen window (still smiling since he had no idea what I was scheming up for him when we got home!)

As it turns out, suet is “raw beef or mutton fat; especially the hard fat found around the loin and kidneys.”  (It wasn’t particularly appetizing especially when she confessed that on a rare occasion you might get a chunk of it in your pudding if it didn’t completely melt through!)

Thankfully, even though Tiffany wasn’t making a substitution, we might substitute in vegetable shortening today. 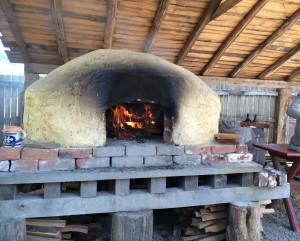 Tiffany explained that the original recipe called for the pudding to be boiled, but since the oven was already fired up, she was going to bake hers.

Unfortunately, Darrell and I started wandering the village streets while it was baking and missed seeing the final outcome.  When we checked back, however, all reports were favorable! Seeing that there wasn’t even a crumb left, we had no doubt that they were true!

Inspired, I couldn’t wait to start working on my own bread pudding when I got home!  “How hard could it be to go by feel and adjust as necessary like the colonial bakers?” I wondered.  They made everything look at least do-able!

Since I don’t have an outdoor bake oven (yet!) I decided to wrangle Darrell in to help me whip up a dutch oven bread pudding right in our own campfire!

In my eagerness to get started, I conceded and bought a loaf of french bread rather than baking it myself.

I adopted the same attitude I have when I make Scavenger’s Bread and started using what we had.  I got right in the groove using coconut milk rather than regular milk and, since we’d been cherry picking earlier in the day, I dumped a few of those into the pot, too! 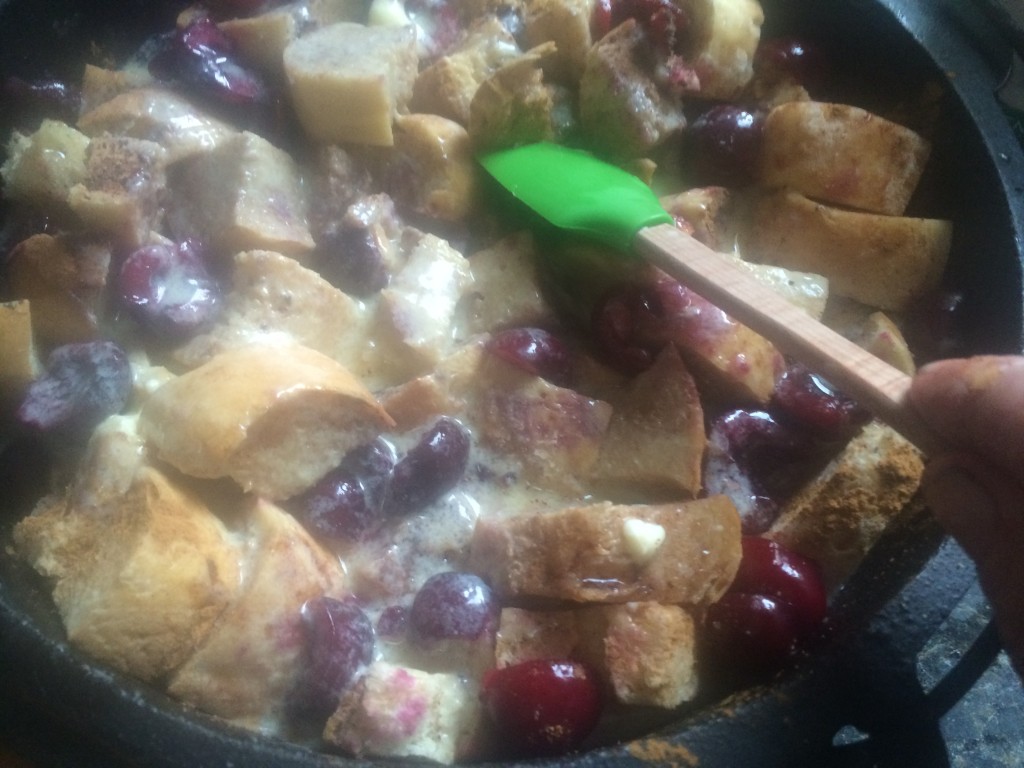 Our good intentions went a little amuck when we realized halfway through cooking that we hadn’t produced enough heat to get the job done!  A little frenetic energy started as I shuffled coals around while Darrell lit a second, smaller fire next to the dutch oven to try to generate more coals to finish what we’d started! 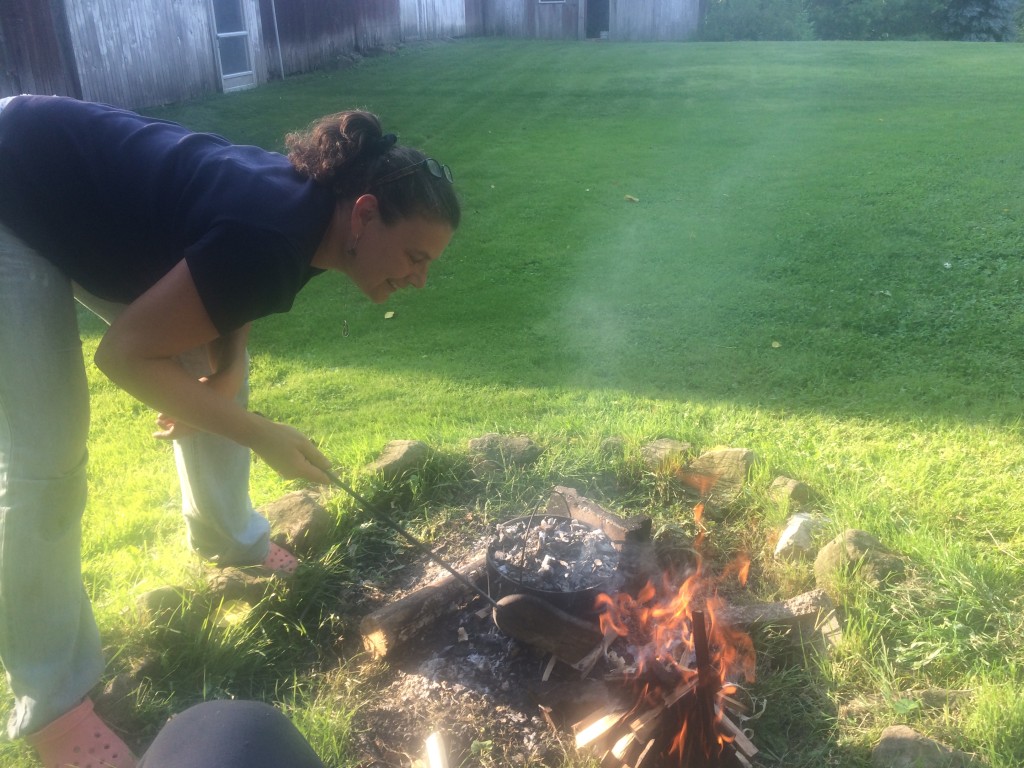 We may have made a string of poor decisions at that point when we peeked in a little too soon (and too often), got a little ash in our pot, and (in desperation) put flaming kindling right on top of the dutch oven. 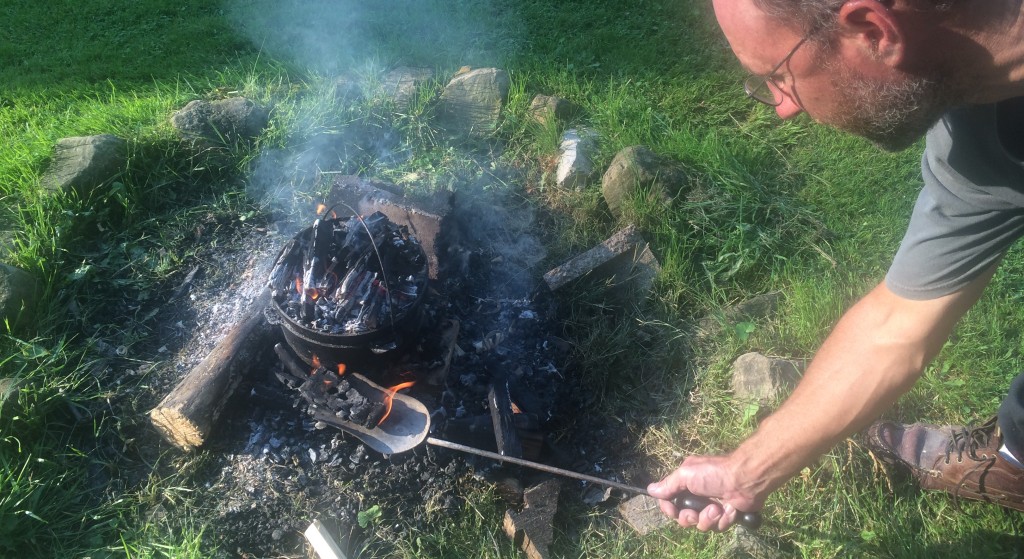 Though our cherry bread pudding was a little too blackened from the ash and cast iron for my liking, it was still tasty!  Equally satisfying was the fun Darrell and I had fun along the way and the experience we racked up with this more primitive style of cookery.

We did have to pause between bites to appreciate the bakers in the colonial village.  Sure everything they did looked do-able (and easy) but, in truth, they had accumulated hours of experience which gave them the wisdom and expertise that Darrell and I were obviously lacking!

It was a great lesson for me in letting go of the destination (or outcome in this case!) to just allow myself the time to explore the process without taking myself too seriously.  Let’s face it, life would have marched on even if the bread pudding had flopped! 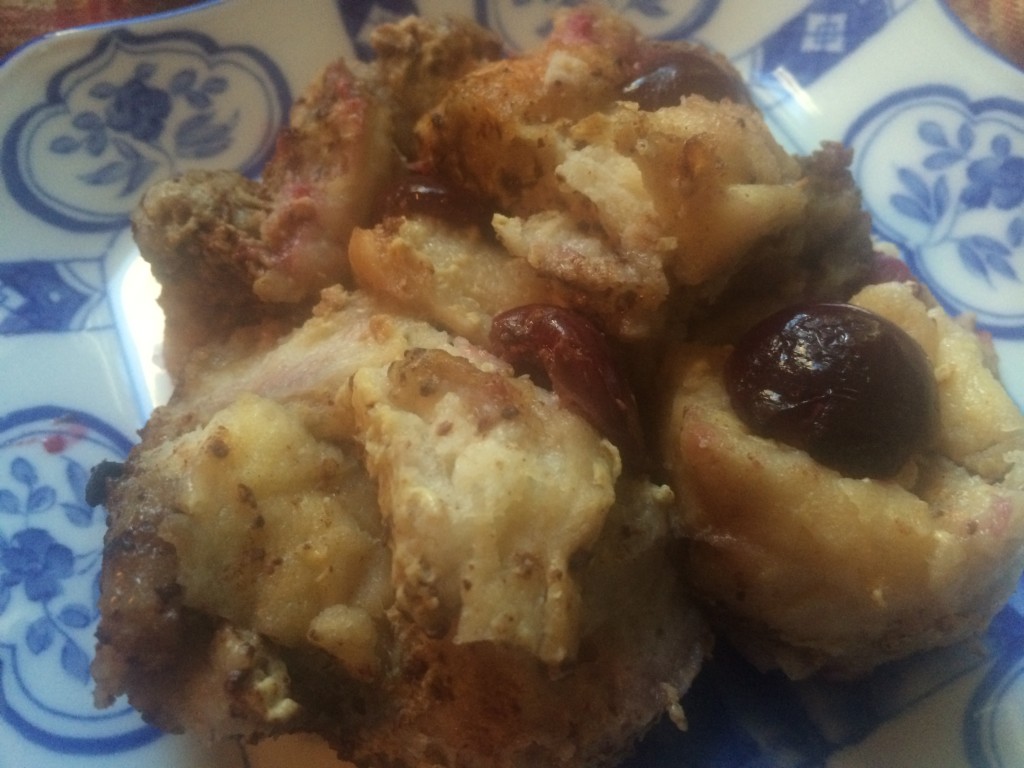 I tried round 2 using similar bread/milk/egg proportions in our conventional oven.  For my second attempt, I thought about making something more traditional with cinnamon and raisins but decided to put some leftover ingredients in my cupboard to good use and made a coconut bread pudding instead.  (Had I dug further into my fridge I also might have added in some pecans!) 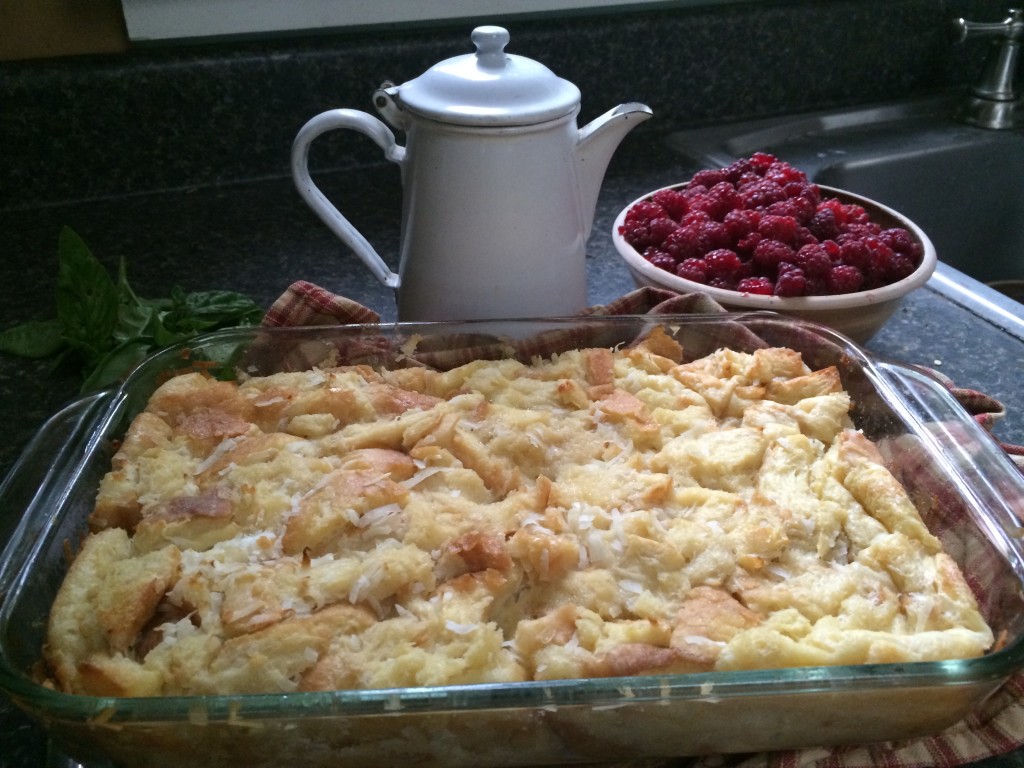 After it baked, I made a simple red raspberry coulis from the berries in our little patch and melted some American Heritage chocolate I’d brought home from Virginia.  Both toppings were exceptional, as was the pudding itself.  Round 3 is up to you! 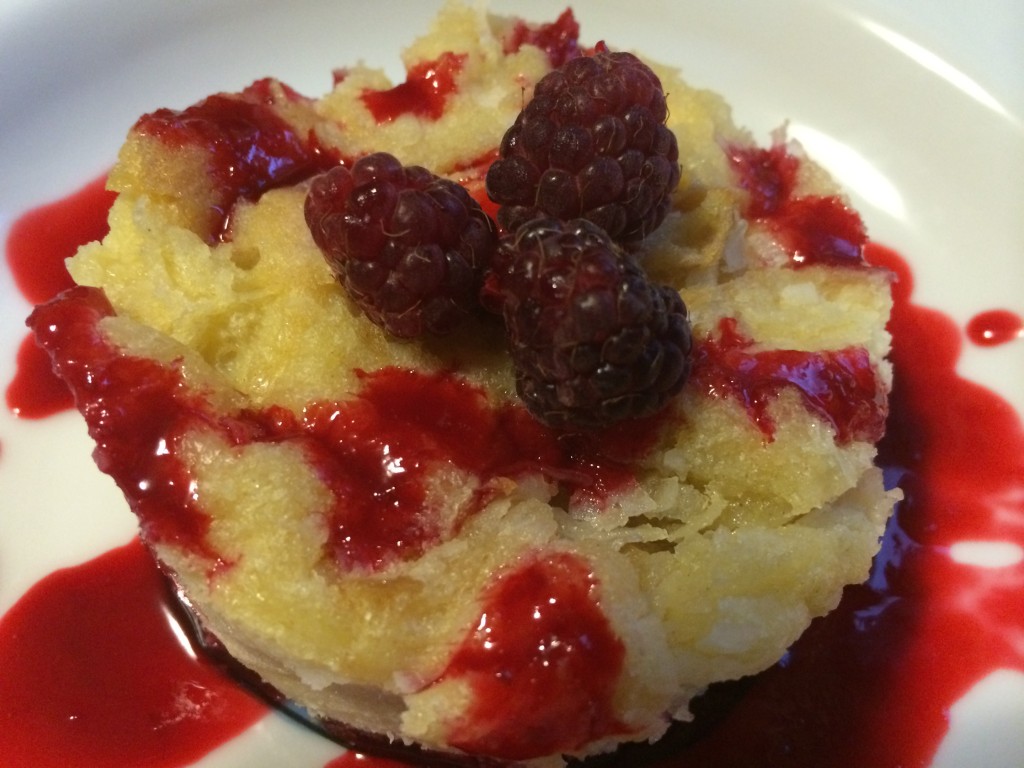 Here’s my basic recipe. Please feel free to adopt a scavenger approach by using what you have, tailoring it to what’s seasonally available, making a sauce or varying how you cook it!  If you happen to try it on your next camp out please let me know how it goes.  I’m happy to learn not just from my own trial and error experiments….but from yours as well!

Please share this post if you know someone who loves this classic comfort food!  Don’t forget to follow us on Facebook! Fall class schedule coming out later this week!  Hope to see some of you around my bread bowl!

1 medium loaf stale french bread (a problem in our house since Darrell eats everything before it has a chance to “stale.”  Should this be the case at your house, too, just cut or tear the bread into cubes and allow it to sit out overnight)

1 teaspoon of vanilla (or other favorite extract)

Butter 11 x 7 inch baking dish and loosely fill with bread cubes.  Pour melted butter over the cubes and lightly toss.  (You can also add in any add-ins at this point.)

Beat your eggs then add in milk, sugar, and extract.  Pour over bread cubes.  Using the back of a spatula gently press the cubes into the liquid until bread is covered and absorbs some of the liquid.

Bake in a 350 degree oven till edges begin to pull away from the sides of the pan and the middle is set, 45 – 55 minutes. 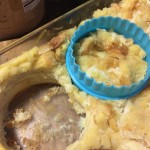 For presentation, I used a biscuit cutter to make beautiful rounds before topping (don’t worry, those edges did not go to waste!)

Consider using ramekins and letting everyone do their own add ins prior to topping with the egg mixture for a little family fun! 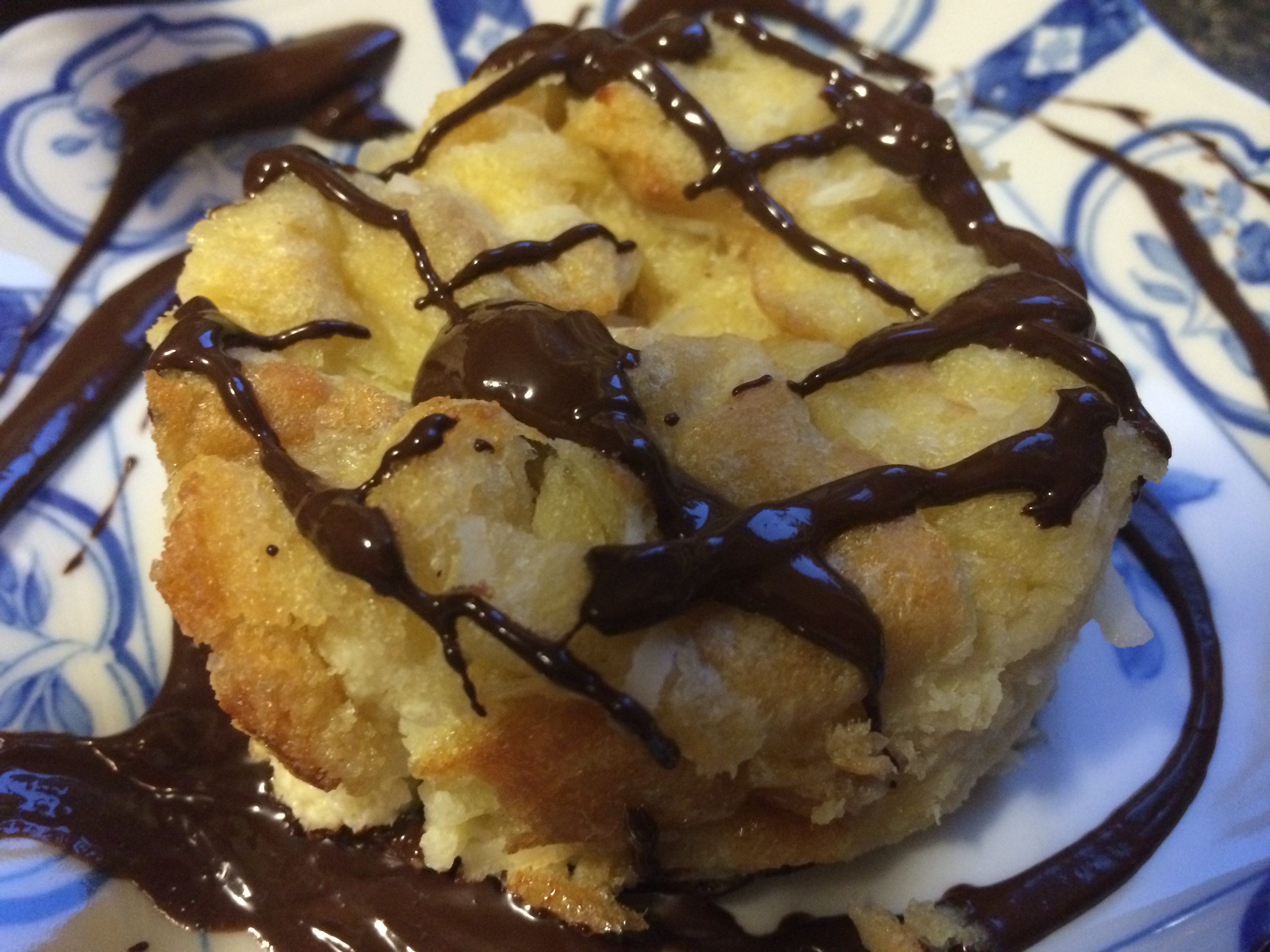 For the raspberry coulis, I seeded my raspberries using a regular mesh strainer then warmed them with a little sugar to taste.  The American Heritage chocolate I simply melted over low heat.