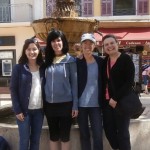 I am just returning from a visit to Provence, France, having stepped out of my life for 8 days with nothing holding me to my normal patterns and routines.  Even my husband, Darrell, was left behind as I joined up with long-time girlfriends to set out on our adventure!

The bread was amazing.  I sampled chocolate filled brioche (and made some nearly the minute I got home!), fig bread (I refuse to live without this now that I know it exists), olive breads, fruit breads, and baguettes.

Boulangeries (bread stores) were on every corner.

So were ancient buildings and cathedrals. 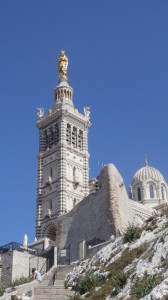 My friends and I listened attentively to our guide, Veronique, who recounted the pageantry around yearly festivals and the roles in them that had shifted over time from grandfather, to father, to son.  Ritual runs deep and  pilgrimages are simply a part of the fabric of life along with threads of mystery and mysticism.

Having grown up with a grandmother who emigrated from the Mediterranean part of the world (Sicily!) with her own deep roots in faith, I heard an echo of familiarity in what I saw, heard, and felt despite the fact that, on the surface, much of it was entirely new. 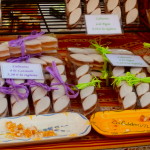 I found myself soaking in the sights, sounds, and smells of the culture though I wasn’t sure how I felt about old bone relics beneath cathedral floors in candle-lit crypts. 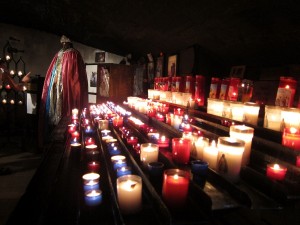 Despite any misgivings, I sensed an unspoken reverence that filled even the cracks in the old stone walls as I stood amidst the trinkets, treasures, and prayer requests scribbled on scraps of paper that had been left by weary travelers. Silence settled on everyone, including me, pilgrim or not.

Standing in the dimly lit rooms, I couldn’t help wondering about the pilgrimages I’d heard about.  What were pilgrims seeking (if anything at all)? Could it be found in these old crypts?

I was still ruminating on these questions as I approached the path to climb to the monastery and grotto of La Saint Baume. Bundled up against the chilly forest air, I considered the early prophets and druids that had once inhabited the mountainside.  What was it about them that had drawn both peasants and kings to make this climb for so many hundreds of years?

With nothing but the landscape to distract me, the walking slowed the normal chatter of thoughts in my mind 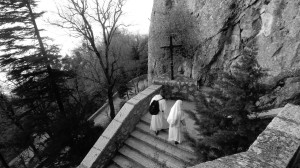 - I was simply climbing.

As I approached the first stone grotto, it began to sink in that I probably wasn’t so different than any of the other travelers who hiked the steep stone steps leading to the chapel.  “Wasn’t life, for all of us, a pilgrimage of sorts?” I wondered.

Granted, I don’t go in search of ancient relics but I often seek inwardly – reflecting on my place in the world, examining where I’m holding judgments, whether I’m withholding love, how I can best be of service in the places I find myself.  It’s a pilgrimage into my heart with the purpose of bringing out into the world what I find there.  Isn’t that what pilgrims do?

In the busy-ness of life as I walk it, so many things get pushed below the surface and begin to accumulate.  It’s easy to miss the jewels in my day when there isn’t time to pause and assimilate them.

In the slow walk up the mountain, contemplation replaced the idle chatter and I saw life, my life, with such clarity.  I could see how its richness gets diluted by the frantic pace that I move through it!

“I want to savor the moments of listening to Darrell talk about his garden plans,” I thought, “to allow myself be inspired for more than a fleeting moment by a student’s sincere determination for social justice, and to be able to feel (not just hear) the words of a close friend whose life sometimes seems to be crumbling around her.” 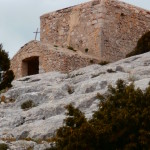 By the time I reached the summit, I found myself making a silent vow to create the time when I got home to continue this pilgrimage into my own interior on a regular basis.

The walk down the mountain was quiet.

Days later, back in my kitchen (experimenting with that chocolate brioche!) I realized that taking time to just be in the fullness of life is not so different than the yeasting process for the breads I make.

After I’ve gathered and mixed up all the ingredients and done what I can to knead them into a pliable dough there comes a point when I have to stop.  Just like the rest of us, yeast needs time to do what it is organically meant to do. Allowing for the process is the very thing that produces both texture and depth of flavor.

I may not be able to fly off to Europe for 8 days to step out of my normal routines and patterns any time soon, but it’s important to take time out, to slow down, to contemplate what’s moving in my life, and make space for what wants to take shape in me….one slow step at a time.

It’s just a hunch, but I suspect those who continue to make those pilgrimages have known this all along.

While I haven’t had a long afternoon pause since I’ve been home for pastry and cafe-au-lait with friends yet, I’ve been experimenting with recipes! 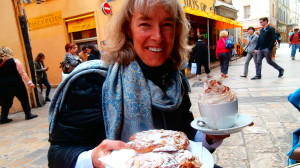 You can see pictures of the brioche I had in France and the ones that came out of my oven along with the recipe in the Chocolate-filled Brioche Rolls post!

Let’s hope that we find ourselves together one day around the bread bowl, taking time out for both bread….and life.