I followed Darrell out to the garden to harvest rhubarb for his cake!

Even though I know better, I tend to think of rhubarb as a fruit.  Being that it’s tart and sneaks itself into all kinds of desserts, it seems to be masquerading as one!

To be a fruit the rule of thumb is that it has to have seeds.  There’s probably more to it from a scientific stand point and armed with just that rule of thumb probably makes me a bit dangerous.  Still, no seeds makes rhubarb a vegetable and tomatoes a fruit.  Go figure.

Does that mean that a cucumber is a fruit?  What about peas?  Olives? Peppers?

It could spark some lively conversation around the kitchen table!  Why not whip up a rustic rhubarb cake first?  Serve it alongside the debate and everyone will likely come to the same conclusion: fruit or vegetable, rhubarb has earned it’s place on the table!

I’m generally not the rhubarb cake maker at our house, so for this post I followed Darrell around while he made the last one we devoured!  You can find the rest of our rhubarb story in my last post This is the House that Love Built.

Hope to see you around the bread bowl soon!  In the meantime, comment in if you try or modify this yummy cake!  I’m always game to hear any tips you might have! Enjoy! 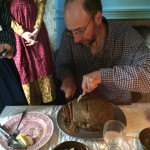 Here’s a “sneak peek” of Darrell getting in on the action at the museum’s dinner!

PS: I had a great time at the Jane Austen themed dinner at the Genesee Country Museum last week!  Who knew Jane had such an influence around these parts!  More on that in my next post….

He keeps his pocketknife handy to remove the leaves before bringing them in. The leaves make great weed blockers! 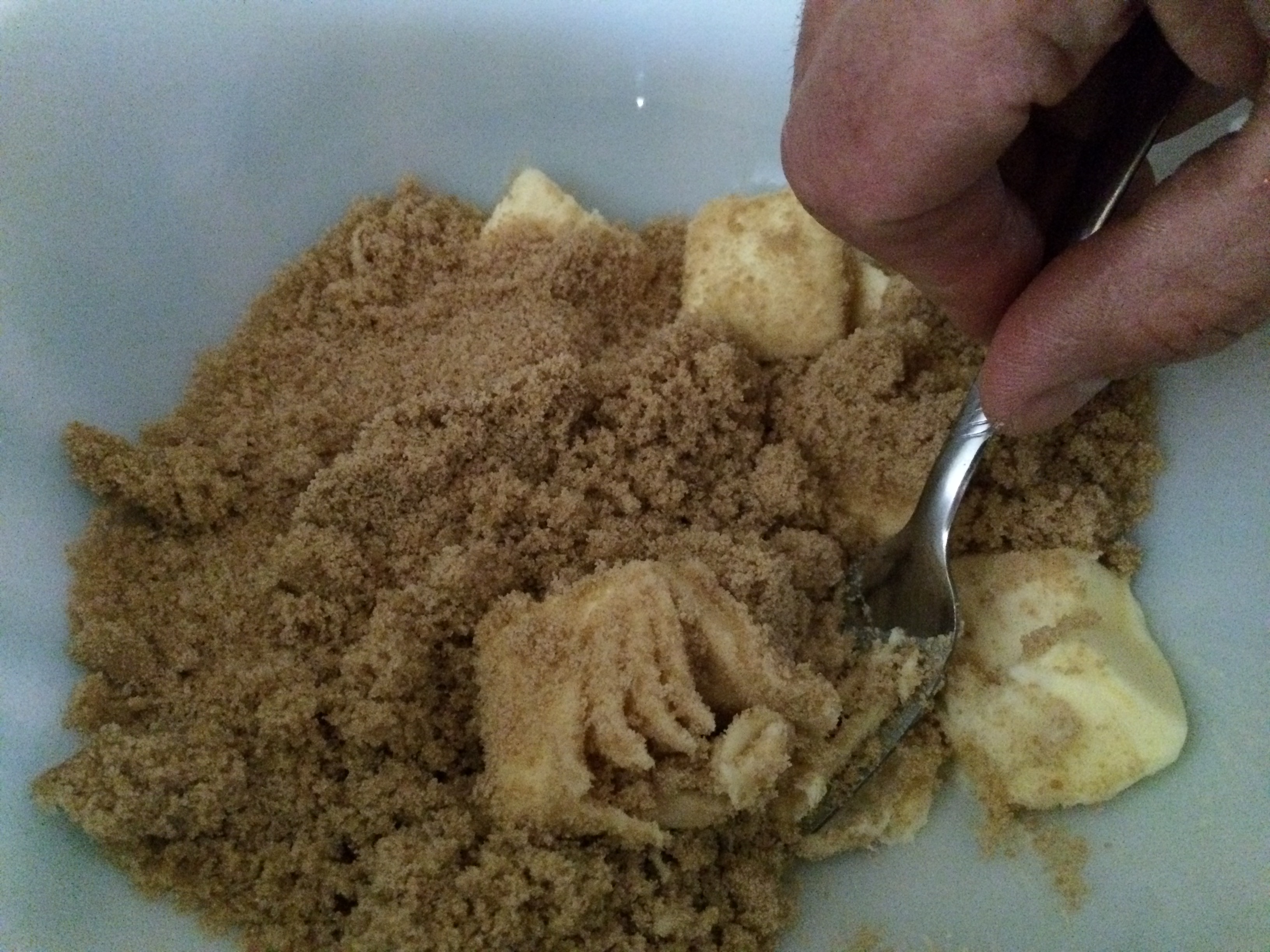 Add the dry ingredients to the butter mixture and combine. Don’t worry if your batter isn’t smooth before adding the flour. 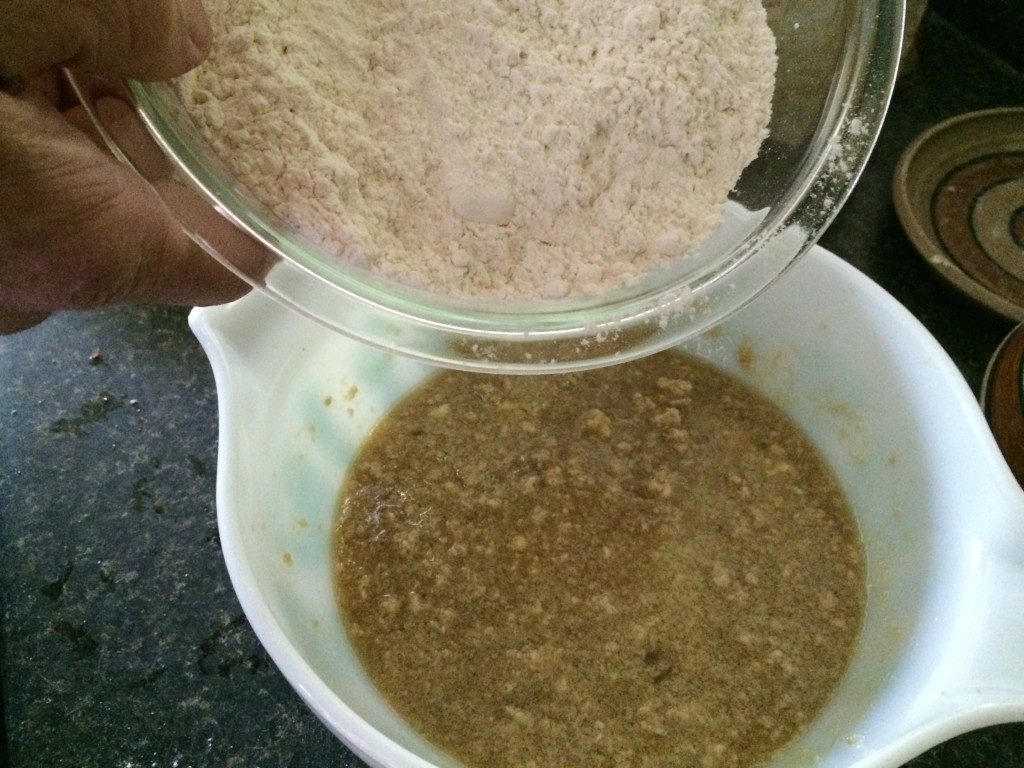 Once the wet and dry ingredients have been mixed the batter will be creamy! Next, stir in rhubarb.

Butter and flour a 13 x 9 inch pan.  Pour batter into the prepared pan and carefully spread to the edges so that you don’t disturb the floured pan.

Combine all topping ingredients except the nuts and sprinkle evenly over the batter then top with nuts.

Bake in a preheated 350 degree oven for 45-55 minutes.  Cake should lightly spring back in the middle when it’s done. (The toothpick test is not a sure thing with this cake!)

Poor planning on our part left us with too few walnuts so Darrell added some pecans and sliced almonds to what we had! Still yummy! 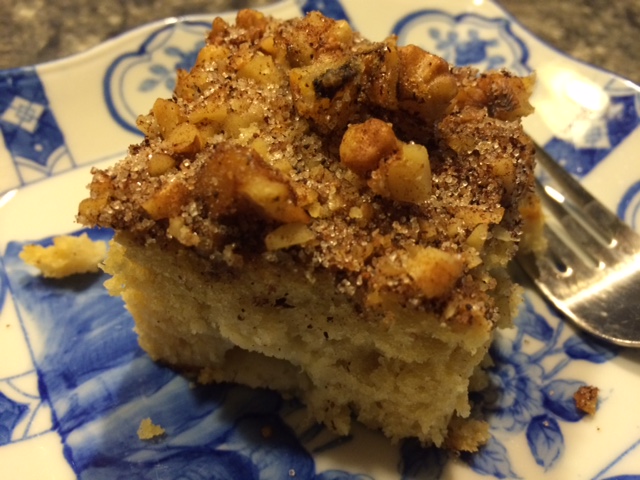 This is the rustic-rhubarb-not-too-sweet cake!

Just a note…  I tried this as a bundt cake (doubling the sugar and nuts so I could layer some in the middle of the batter!).  It came out delicious but the texture was much more dense than Darrell’s cake.  I prefer Darrell’s.  It may be (at least in part) because he did all the work! 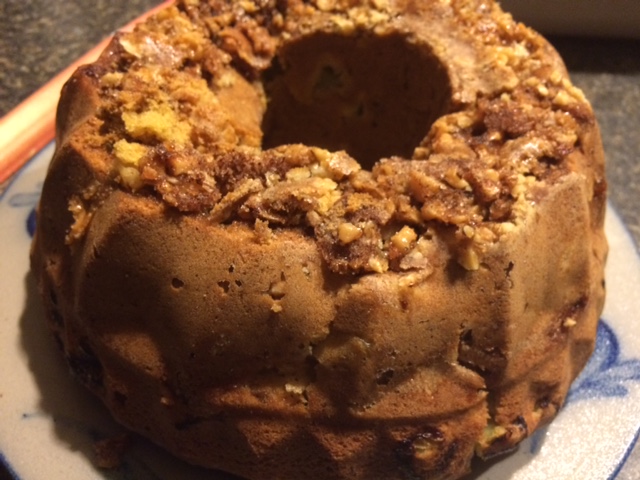 My Story with Bread