I decided this week that I needed to make a hearty bread.  It has, after all, been one of the longest, coldest, snowiest winters that I can remember (since my childhood in the 1960s anyway!) 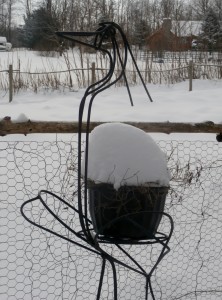 There will be flowers rather than snow piled on our garden heron…soon I hope!

Like most people who live in houses built on the heels of the Civil War, our little farmhouse is “breathable.”  Because of this, I’ve spent long hours curled up with a book or a cup of tea right next to the woodstove.  Warm.

I take the cold in stride most days but have noticed a certain crankiness rising up in me.  When I heard that the temperatures were going to drop again into the single digits this week, it almost put me over the edge.  Come on, even my normally “take-everything-as-it-comes” husband had started to express some concern about how long his maple syrup season is going to last this year. (Special Event this month at the Genesee Country Museum!)

So thinking about a hearty bread made sense to me and searching out a new recipe seemed a perk in the bleakness of the continuing cold.

I landed on a recipe from Cooks Magazine that was loaded with seeds and grains.  Definitely hearty. 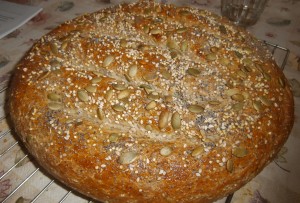 used to come out of Montana Mills Bread stores that were popular before people worried about their wheat bellies. I was pretty impressed with it.  Would it consistently turn out so well?  I kept at it.

This bread is quickly turning in to one of my favorite breads, not just because it has incredible taste, crust, and crumb but because of a lesson that it reminded me of along the way.

Because this dough started out with a 7 grain cereal, it had an interesting texture to it right from the start.  It had a different feel than anything I’d kneaded before and I wondered how long it would take to develop the gluten.  Would I be kneading it forever? Would it just turn into a crumbly mess?  Something that resembled more of a brick than a loaf of bread?

I kept kneading, letting the questions pass, as I gave my full attention to the dough — noting the subtle changes to its pliability. Under the rhythm of my kneading, it began to soften.

As I stood there kneading, it occurred to me that Spring was, in fact, working its magic, too. There were subtle changes to the texture of winter 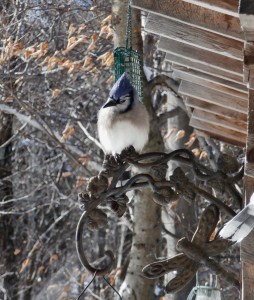 The sun had been out more over the last week. (I stood in the window one afternoon at school just soaking it in). It wasn’t dark anymore when I left work each day. The light stretched much longer into the day than it had over the past month. One morning I had even noted some early morning bird song.

When I mentioned my observations to Darrell, he added in that the chipmunks had become sentinels again, perusing the perimeter of the garden in anticipation of his early Spring planting. 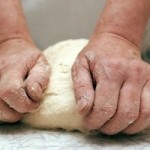 I suppose that’s what kneading life is all about: the way we pay attention to, and work with, the subtle changes in our lives.

It has been a long winter but the weight of it seems to be lifting as I realize it is receding into the warmth of Spring.  Gone soon will be opportunities to ski, to watch the snow falling gently as dusk comes, to sit by the television with my fingers crossed hoping for a snow day and yes, even time to just curl up by the wood stove and read for endless hours.

In what remains of winter, I’m changing my “to-do” list (yup, taking complaining right off the list) and adopting the following words of wisdom to see me through: 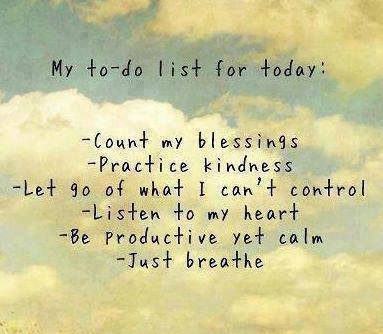 Spring is on the way!  In the meantime, the post that includes the recipe for that hearty bread should be out in the next day or two. Give it a try, and when you do, pay attention to the subtle changes in the texture…of both the bread and life. 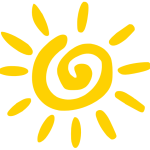 Hope to see you around the bread bowl after the Spring thaw! If you’re new to my blog, check out my bio and my story with bread.