The Genesee Country Museum’s Baking with Maple contest is officially over for 2014.

My other entries: maple glazed popcorn and shortbread crunch cookies

I was up at 6:00 this morning getting my Maple Ribbon Cake ready and decided, on a whim, to alter the recipe based on some feedback my son gave me last week.  Big mistake!  The cake seemed to sag (along with my hopes for the blue ribbon!) when it came out of the oven.  Lesson #1 of the day: Don’t alter the recipe the day of the contest.

Lesson #2: Sometimes what we have right in front of us is, in fact, already awesome in its own right.  At what point is it OK to stop striving for something better?  It’s probably a fine line.  Maybe even a razor’s edge. 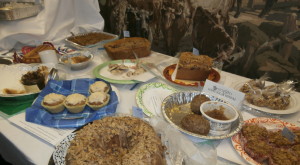 A sampling of the goodies that came in!

Despite my doubts, the spirit of fun was in the air as everyone showed up with their cakes, pies, cookies and savory maple creations.

I’d done my best so there was nothing left to do but meander around the village with Darrell until the judging was done!

We bundled up (it’s still cold…and windy here!) We headed down the nature trail to see the museum’s syruping operation.  Though Darrell’s been producing maple syrup on his own for several years now, he still has a natural curiosity about it so we hung around listening for a while and found out some interesting tidbits!

Did you know, for example, that in upstate New York people began tapping trees and making their own sugar in response to the slave trade in the mid-1800s?  Many people in this area were abolitionists and since white sugar was coming from the West Indies, this gave them a proactive, non-violent, way to take a stand. Huzzah! 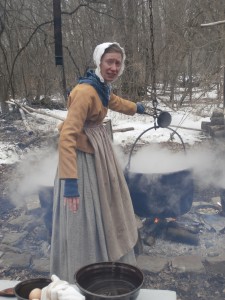 We also learned that early settlers cracked a raw egg into their boiling syrup to remove all the impurities that hadn’t been filtered out.  The egg must have acted like a magnet.  Darrell’s got big ideas spinning in his head about this.  Don’t be surprised if you see a picture of a maple boiled egg show up in a future post!

After sampling an 18th century 1-2-3-4 cake (1 cup butter, 2 cups sugar, 3 cups flour, 4 eggs) at the Livingston-Bakus house, visiting with the cooper and the tinsmith we stopped for lunch and eventually worked our way back to check on the contest results.

With my prize (beautiful hand thrown pottery bowl!) and my blue ribbon!

I was expecting to slink away with a handshake and a smile but who’d have believed the end results? While the grand prize went to  someone who had made a savory chicken and maple dish, that Maple Ribbon Cake (sag and all) still tasted delicious enough to wow the judges into awarding it the blue ribbon! First place in the cake division!!

Wondering about the Maple Crunch Medallions?  They took the white ribbon, 3rd place in cookies.  The maple glazed popcorn, while eaten nearly to the bottom of the bag, did not place (but remains my favorite).

Leaving with my prize in hand was satisfying but the real prize is having a willing group of family and friends to sample my successes and failures.  Though it might sound Academy Awards-ish, I have to say that they’ve all earned a blue ribbon for their patience and good will along the way! 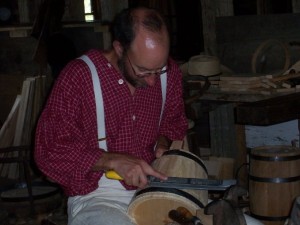 Darrell working on his firkin….look all costumed up and everything!

part of our past.  If you haven’t been on the Genesee Country Museum’s website lately, it’s worth a visit to see what’s happening.  They’ve been expanding a lot by scheduling everything from Laura Ingalls Wilder Days to Fiddle Fests.  Darrell’s even taken a coopering class there.  (I have the firkin to prove it!)

I’ll be posting the recipes this week, including the one for the Maple Glazed popcorn below! But after that, it’s probably time to start thinking about next year’s contest!

If you’re new to my blog, you might want to check out My Story with Bread or My Bio.  Why not consider adding your email to my mailing list so you can join this journey with us!

Place maple syrup and butter in medium saucepan and bring to 300 degrees.  (It’ll take upwards of 10 minutes +)  Meanwhile butter a large cookie sheet and pop the popcorn. Put the popcorn and nuts on the cookie sheet, sprinkle with salt, and keep warm.  Butter a wooden spoon.

When the syrup comes to temperature, work quickly to pour over warm popcorn and nuts.  Stir gently to even out the syrup mix and check for any syrup that might be pooling into brittle! (I generally have some of the nuts loose after this but it always works out because some people don’t like the nuts and some people are always looking for extras!)

Cool and break into pieces.  It rarely lasts more than a couple of days at our house but should yours last, store in a tightly covered container.

I hope you enjoy it as much as we do at our house!  As always,

3 thoughts on “And the results are in….”