Cinnamon rolls are typically held in high-esteem as a breakfast treat but this week I altered the face of them a bit.  I made a jumbo roll, added some fresh local strawberries, and produced an amazing dessert. 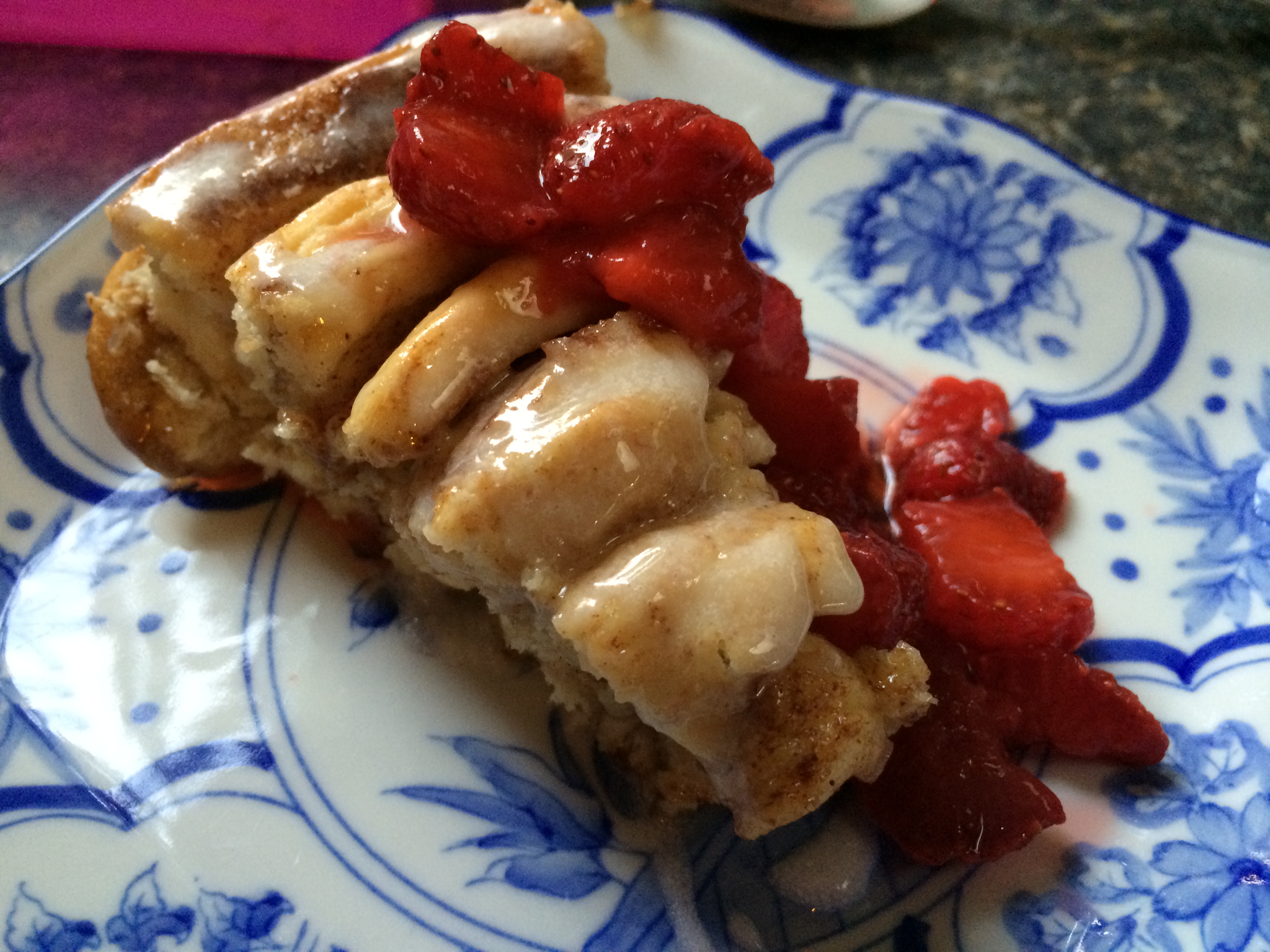 You already know that whenever possible I like to keep things simple.  Since I already have a sweet dough that I love (from the Maple Cream Cheese Coffee Cake) I decided to turn that same dough into my cinnamon rolls.  It was a twist on the recipe but there seemed to be a life lesson in using what I had.  Why spend time hunting for something new and better when I already have something that works? 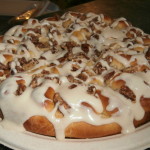 The dough shaped into a jumbo cinnamon roll!

Part of the bread making process is giving the dough shape and form which is exactly what I did.  I changed up the filling ingredients and altered the shape so that what came out of the oven, though based on that good-old-reliable-dough, was something entirely new.  Simple.  And this time of year, with school ending and the twelve-year-olds I work with anticipating summer break, I need to keep things simple!  For me, it’s part of staying in balance.

Even better that I could kill two birds with one stone (…or one dough).  I split the dough, shaped one half into cinnamon rolls that I could bring to work to share and used the other half to create my beautiful dessert!

It occurs to me as a stress eater that I could also have eaten that jumbo roll all by myself and with a straight face have honestly said to Darrell, “You go ahead and eat the rest, I couldn’t possibly eat more than one!”

If you enjoyed this post or know someone else who would, please consider sharing it!

Looking forward to seeing you around the bread bowl!

Cinnamon Rolls with a Trick and a Twist

Mix 2 cups flour, sugar, salt and yeast in large bowl.  Combine shortening with liquids and heat to lukewarm (around 125 degrees; shortening doesn’t have to be completely melted.)  Stir into flour mixture then add egg.  Beat with mixer until smooth.

Stir in enough of the remaining flour to make the dough easy to handle.  Knead on lightly floured surface about 5 minutes.  Cover and let rest 10 minutes.

Prepare the filling by mixing the sugars and cinnamon together.

For single size buns roll each half of the dough into a 12 x 12 square.   I usually spread a little softened butter directly on the dough before sprinkling 1/2 the cinnamon sugar mix on each half.  It’s optional.  The fat in the butter creates a barrier so that the dough doesn’t stick to itself and produces the classic cinnamon rolls that you can unravel bit by bit till you get to the very best piece in the center! 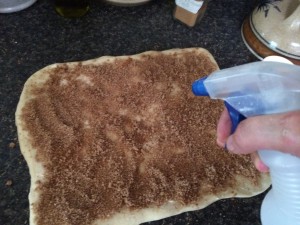 Spray the cinnamon sugar lightly with water then roll the dough.  Begin at the bottom edge and fold the edge up and over the filling (keeping it tight).  Continue to roll the dough into a log until you reach the end.  Pinch to seal.

Measure and mark the dough in two inch intervals then it’s time for the trick!

Use dental floss (unflavored) to cut the rolls.  It makes a clean cut, doesn’t smash your rolls, and keeps things neat.  Just wiggle the floss under your dough, cross the floss at the top (like you’re tying your shoe) and pull down.  Voila!  Continue to shimmy the floss under the dough in the same way until you’ve cut all your pieces.

Place the  rolls in two buttered or parchment line pie plates.  If you’re only making small rolls you can use a 13 x 9 inch pan.

Allow to rise until doubled in size.

For the large bun roll the dough into a 10 x 12 inch square.
Follow the same directions as for the single size rolls until you’ve lightly sprayed the cinnamon sugar with water.

Roll the first strip loosely and place it in the center of a buttered pie plate.  Coil the remaining strips around the first one by attaching each strip to the end of the previous one. Pinch the last strip when you come to the end.

(At this point with either the single serving or jumbo rolls you can cover and refrigerate up to 24 hours; rising may be slightly longer)  Cover and let rise about 45 -60 minutes or until double in size.

Bake in 375 degree oven for 30-35 minutes until golden brown.  Check to see if they’re done by putting a fork into the center of a roll and gently lifting.  If the dough is sticky or raw, give it a few more minutes. If the rolls brown too quickly, cover loosely with foil.

Cool and glaze.  Sprinkle on nuts if you love them as much as I do!

For an incredible twist take the large cinnamon roll off the breakfast table and present it as a delicious dessert.  Cut up some fresh strawberries and mix with a little sugar.   Cut wedges of the roll and spoon some of the berries over the top.  You could add a little whipped cream, too!

My Story with Bread

One thought on “Cinnamon rolls with a trick and a twist!”