It’s easy to forget we share common ground when differing views about sensitive issues such as immigration rise to the surface.  I have to pause to remember that our roots in America began as a country founded by immigrants.  Knowing that kneading is what gives a loaf of bread its strength I can’t help thinking that our country was kneaded together in much the same way with a thread of this and a scrap of that from places all over the world.

My maternal grandparents were immigrants from Sicily.  You may remember the posts about my grandmother’s Muiolatte, the Sicilian stuffed breads of my childhood. While I don’t know who my paternal grandparents were, I suspect they were a part of that same mass migration from Europe.  With auburn hair, freckles, and the last name of Donovan, I’m pretty sure my dad was at least a little bit Irish. 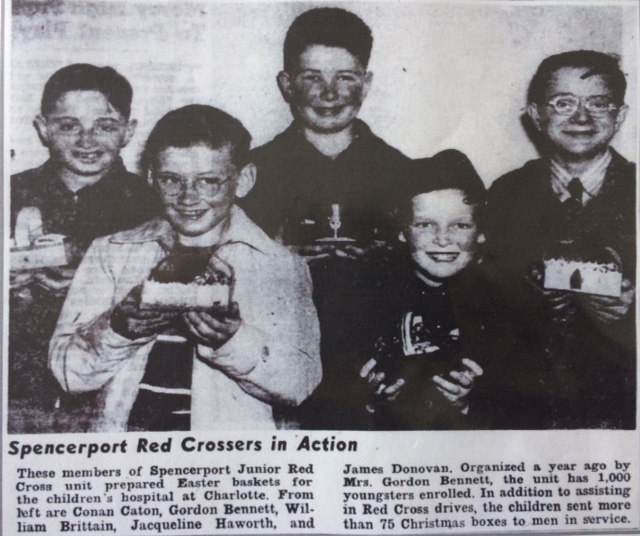 I’d never seen a picture of my dad as a child until my research unearthed this article from the Democrat and Chronicle from 1943. He had finally found his first permanent home with the Bennetts of Spencerport. He’s on the far right.

As a teenager he was refused a job at the local meat market based on his status as an orphan. How hard must that have been for him to be identified as tainted in some way through no fault of his own? Wasn’t it bad enough that he had lost his parents?

His redemption came when his foster father, Gordon Bennett, a valued employee of the market threatened to quit his job if they refused his “son” a job.  Mr. Bennett died when I was just a baby but he’s left quite a legacy for me to reflect on.

In some way, it probably made sense back then to the people who targeted and discriminated against others. It probably makes sense to some people today, too, given the current climate in our country but I lean toward inclusivity.  I know that there may be some people out there that may mean me harm but I can’t discount the masses of others that are simply someone’s sister, mother, grandmother or friend just like me.

Our family histories all include immigrants and the gifts they brought along to this melting pot. I discovered one of those gifts when I baked with my friend Patty and her cousin Pam who are part of an Irish family that’s been rooted in America for three generations. 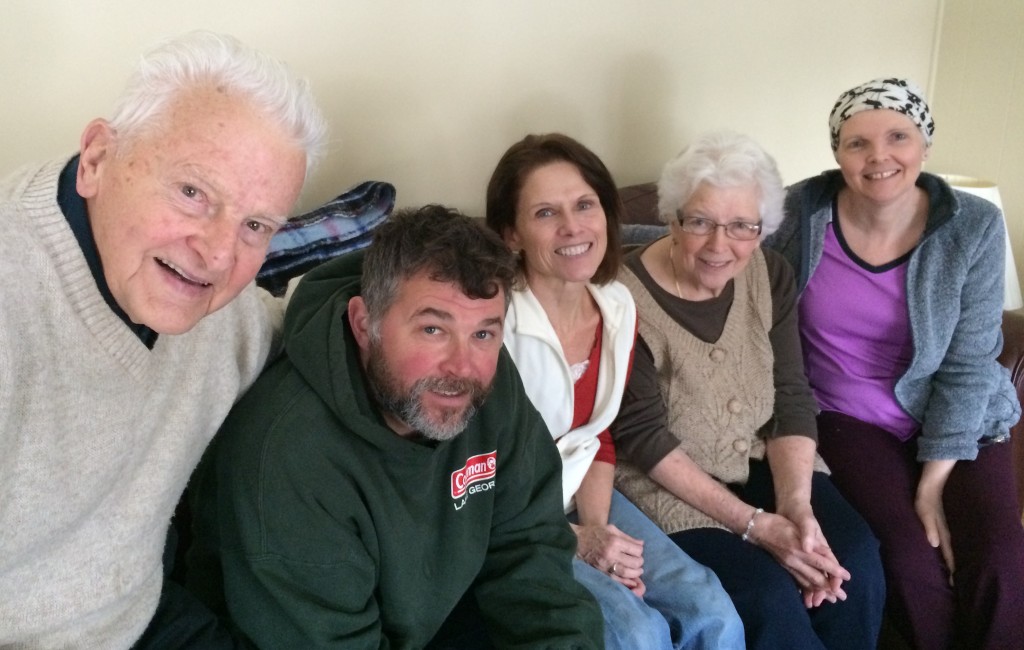 A day with Patty, Pam and part of their Irish family!

Patty and Pam’s  grandmother, Mary, was born in Ireland in 1898.  She left school at thirteen to take care of the children when her mother took a job doing laundry for the nuns in Kilkenny.  Her dad, a marble cutter, traveled so it made sense that Mary, as the oldest of ten, was expected to help hold down the fort.

Eventually she and her younger sister, Chrissy, headed to England to be housemaids and began gathering their own life experiences.  One night when a young man showed up in full uniform to take Mary on a date Chrissy eyed his sword, ran to an upstairs room and called out the window, “Oh, Mary, watch out for that thing hanging off him.”  It may have spoiled the date but it’s definitely become part of the family lore.

Having no desire to be a nanny and help raise another brood of children, Mary advertised herself as a cook.  Who could blame her?

As the luck of the Irish would have it, she was hired on the spot by Major Austin, the surgeon general of India who was living abroad. He sent her to cooking school to learn French cuisine.  In the aftermath of the first World War, she became adept at taking a bag of old dried up vegetables and making them into something great.

After she married, she ended up an ocean away from her homeland.  Mary’s husband wanted to raise their children in America.  Certainly Mary had started developing some gluten of her own in raising her siblings and through her adventures in England, but this new ingredient would change the structure.  What strength would develop once they pulled up anchor and set sail into the unknown?

She found her place here amidst the diversity; one of those strands of the fabric of America. 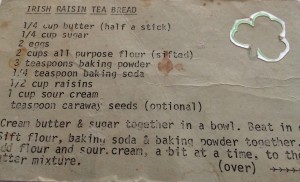 In the early 1950s, while living in the Bronx, she stumbled onto the recipe for Irish Tea Bread in a magazine insert.  As the family tells the story now, “the bread wasn’t bloody dry and hard like so many other recipes that claimed to be Irish.”

It became a family staple that didn’t just make an appearance on St. Patrick’s Day.  Mary brought the recipe with her when she moved in with Pam’s family following her husband’s death and began reweaving her life once again.

“One afternoon after school I announced to my grandmother that I had snacked with my friends, that I was full and didn’t want any bread,” Pam recounted. “It wasn’t until I saw my grandmother’s face drop that I realized her bread was a gift.  She loved the table-time and always knew about boyfriends…and probably everything else that was going on because I’d be sitting at the table and spill the beans before I knew it.” 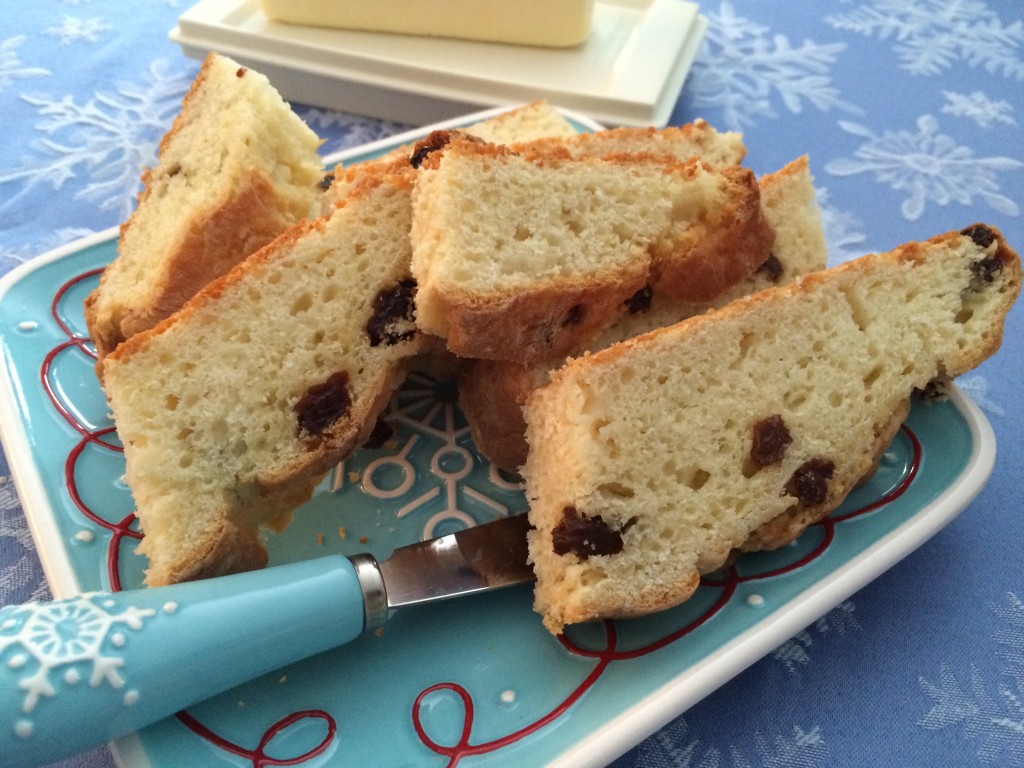 Patty’s memories of her grandmother’s visits were equally sweet and reminded me how central food is to nourishing us in both body and soul.  Those hours logged in with all her grandchildren around the kitchen table helped Pam and Patty knead together some family gluten of their own.  They would lean on it long after Mary was gone and when life dealt Pam some unexpected cards. 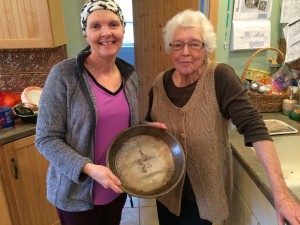 Pam and her mom!

Pam was diagnosed with breast cancer in May 2014.  “I never had a day I was by myself,” she recounted, “Even when I was in the house by myself I wasn’t alone.  I always knew everyone was wanting to help and the knowledge of knowing I could pick up the phone gave me strength.  After a while I realized I could do it.”

She paused. “How do people do it on their own?”

After chemo treatments and several surgeries, she is in remission.  Her optimism about life is inspiring. You can read more about her inspiring story in the Democrat & Chronicle.

I was thrilled to be able to bake with these two cousins and share in their family stories partly because I’ve always had a thing for Irish Soda bread.  Who knows, maybe it’s ancestral, a reclamation of my father’s heritage mingled in my DNA.  If you like it as much as I do, thank someone you know who is Irish and whose descendants likely immigrated here and kneaded their food traditions into America a long time ago.

If you live in the Rochester area and have a treasured family recipe and/or story to share please contact me at kneadinglie@rochester.rr.com.  I’d love to come bake with you and document our collective stories of the past. 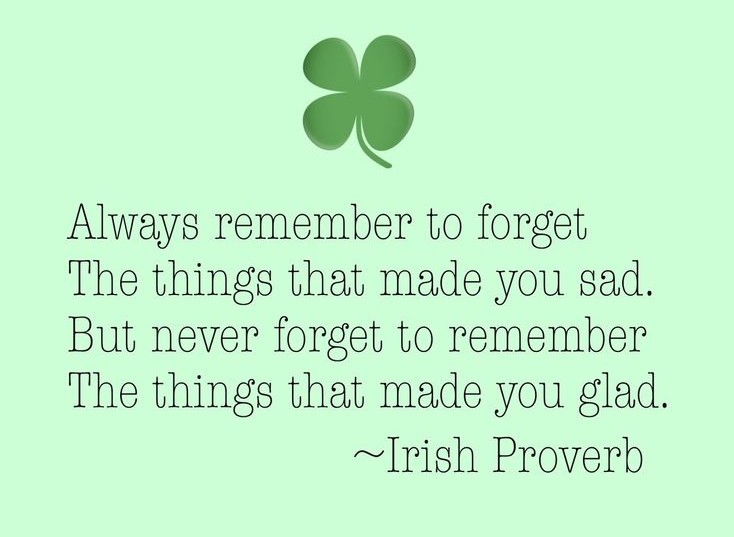 Mixture = Cream butter and sugar together in bowl and beat in the eggs.

Sift flour, baking powder, and soda together and add alternately with sour cream to the mixture.  Mix thoroughly. (If mixture becomes very stiff, add a little milk – a tablespoon at a time).

Add raisins, yellow or brown, or some of each (caraway seeds are optional and I confess I used currants when I made it with my grandson). 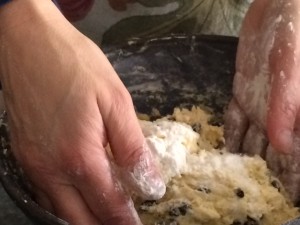 Shape into a round loaf in a bowl and with floured hands life onto a greased pie plate. 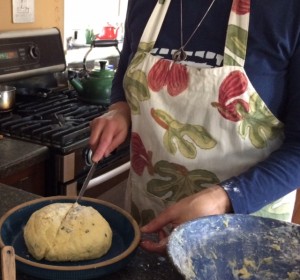 With knife dipped in milk, form cross (marking loaf into quarters).  Pat a little milk over the top of the loaf. 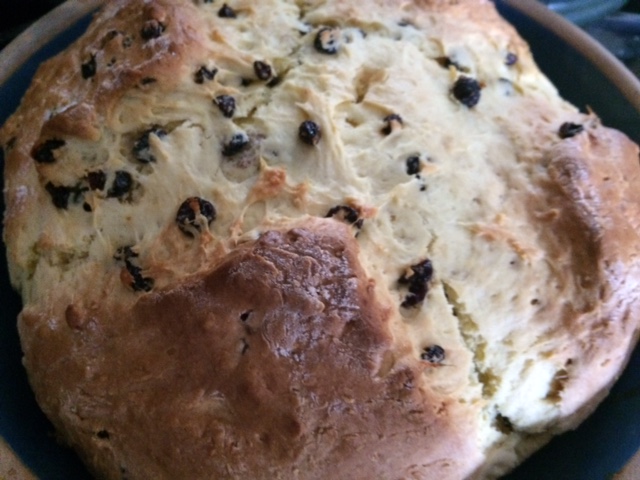