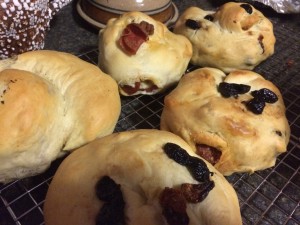 Traditional Sicilian breads that are a part of my genetic make-up!

Deep in the cracks and crevices of who we are, each one of us carries food memories.  Mine are rooted in my grandparent’s house where smells filled the air and crept into every corner. A pot of sauce simmering on the stove, my grandfather’s pan-a-cakes, and my Gramma Meli’s cookies are a part of my genetic make-up.

Leaving my brothers and my own parents at home, I reveled in weekends with my grandparents.  The textures and smells of their home wrapped me up and comforted me as I spent long afternoons at the kitchen table playing Rummy with my grandfather or quietly alongside my grandmother in the evenings listening to her murmur prayers.

I loved everything about being there, even the rhythm of their language: a broken English combined with their native Sicilian tongue.  “Madia, pour me another ‘alf a cup,”  my grandmother would beckon as she pushed her coffee cup in my direction.  Life revolved around the kitchen table. 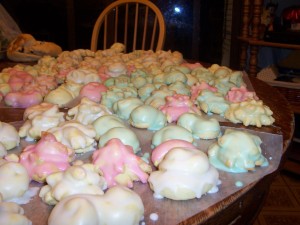 As a child, I was mesmerized watching both of them move through the ordinary.  My eyes grew wide every time I watched my grandmother pull out her biggest pasta pot to make her cookies.  There was no such thing as a small batch.  She was ready to feed the neighborhood if they happened to stop by.

She’d scoop handfuls of flour or use an ordinary tea cup to measure.  In would go a large spoonful of baking powder and a sprinkling of this or that (I was never quite sure.)  She’d carefully pour the oil directly into the pot with a knowing eye.  Cracked eggs were added.  Was she keeping count?  In time, she’d disappear into the pot and be up to her elbows in what was slowly becoming the dough.

She didn’t use a recipe like my mother did.  I never spotted a cookbook.

Her cookies were simple and delicious all on their own, much the same as she was. There weren’t a lot bells and whistles.  No chocolate chips.  No nuts.  No raisins.  The exception, of course, was on special occasions when she might use a little colored frosting and a sprinkle or two to adorn them.

Leaving my grandparents was always bittersweet.  I couldn’t fathom life without them. What child can? 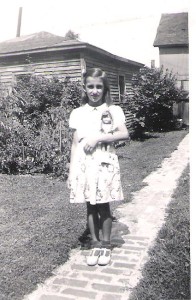 My Aunt Florence who had grown up on the same cookies I had!

When my grandfather passed away, his infamous yellow cake was lost to us.  The recipe had never been written down and it became a taste that only our memories could savor.  My Aunt Florence, determined the same fate would not befall my grandmother’s cookies, pulled a chair up to the kitchen table with a paper and pencil in hand when my grandmother next began her magic.

This time, ingredients were caught in a bowl, measured and recorded. Cooking time was noted and before any were eaten, each cookie was counted.  Everyone in the family received a recipe card but, being in college, I filed mine away.  My grandmother made the cookies, not me.

In the busy post-graduate days, I was raising my own family and didn’t always have time to stop for a visit.  Still, if too many days went by, my grandmother would call.  “Gramma,” I’d try to explain, but she would ignore my words.  “Put-a the baby on-a the phone,” she’d say firmly.  Hesitantly, I’d comply.  I knew what was coming next.

“I got-a the sauce.  I got-a the cook-s,” she’d coo across the phone line.  Patrick would look to me with pleading eyes and I’d find time to take him to her.

I never really minded.  Sharing her with so many people growing up, I counted this time with her as precious. 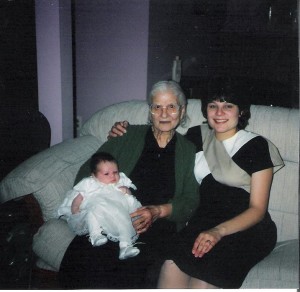 There was a space in my heart that belonged only to her. When she passed away there were moments when it felt like someone had pulled up my anchor.  There would be no more time at her kitchen table together over coffee and cookies.

I wasn’t alone in my loss. Aunt Florence still half-expected to hear Gramma’s voice on Sunday afternoons when the phone rang and Patrick wondered aloud, “Do they have cookies in heaven?”

I assured him that they did. 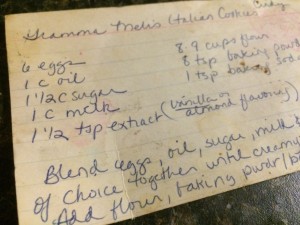 Years later as I was going through my recipe file, I came across Gramma Meli’s cookies.  I fingered the card for a while, reading and rereading the recipe.

Gathering the ingredients made me wistful.  I felt an ache to be in her house surrounded by familiar sights and smells that had comforted me in the past. Tears began to pool and by the time I started rolling the dough, they fell in a steady stream.

Patrick and Cori, curious about what I was doing wandered over to the table, wiggled up into their chairs and looked at me expectantly.  I paused, pulled off a piece of dough for each of them, and carefully began to show them how to roll it into a snake and whirl it up into the shapes just as I’d been taught to do.

Cookie sheet after cookie sheet was loaded into the oven.  By the time we finished, there was nothing left to do except pour two glasses of milk and a ‘alf a cup of coffee.  We ate and dunked until our bellies begged us to stop.  I felt her there with us.  My grandfather, too.

Darrell even joined in on Cousin’s Baking Day this year; pictured here with Cori rolling out the dough!

Making the cookies has now become a part of our annual Cousin’s Baking Day when we gather around the kitchen table to carry on and carry forward the treasures of our heritage.

Taking flight (about my own mom’s passing)