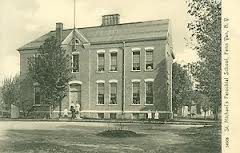 St Michael’s school in Penn Yan, NY.    I spent a lot of Saturday mornings in this building!

Saturdays when I was growing up, my mother carted me to religious education classes, well…religiously. Sitting obediently still, I often counted the minutes knowing that the real ritual began once Mom picked me up.

Hand-in-hand we’d cross the street to the local grocery where fresh bread greeted us at the door, took us by the nose, and led us to the very back of the store where the bakery was. Our timing was impeccable.  We arrived at the exact moment crusty loaves of Italian bread were being pulled from the oven.

Like thieves, we stole away with one golden loaf and moved deftly through the store  so that by the time we got home, it would still be warm.

Unpacked groceries waited their turn while my mother carefully slid our bread from its paper wrapper.  Starting small, we tore off pieces, slathered them in butter, and vowed to save at least a little bit for later.

In the end, Saturday after Saturday, only crumbs remained as evidence that it had ever existed. My mother’s unrestrained passion for fresh bread 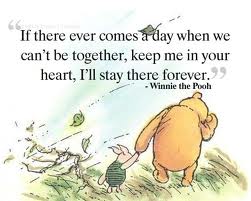 swept me helplessly into its current. During this ritual we shared, her passion took root in me.

It’s not the only thing that took root.

While she’s been gone a little over a year now, I still feel her lingering in those memories and in new rituals that have begun to sprout.

I can already sense her “bread passion” taking root in my grandson, Patrick, who has been a helper since he was old enough to push his stool to the kitchen counter!

At 7 he may already know the difference between a focaccia and a fougasse. Left on his own, he’s capable of devouring more bread than I would dare tell his mother.

When he spends the night with us, our Saturday morning ritual is a bit lazier than the one my mother and I had.  We’re more likely to take a stroll around the yard looking for old cicada shells, snake skins, or other treasures for his nature box.  He’ll sit at the kitchen table with me and sip tea with honey. There may even be an occasional morning out that’s sometimes just the two of us.

I like to think that he won’t only remember the bread when he grows up but the warmth of being wrapped up in love and the feeling that all is well with the world.  I hope, like me, he will be nourished by those memories throughout his life and someday, who knows, maybe he’ll even be passing on some of our rituals to his little loved ones, too.

As I sit here pondering that Saturday morning bread, I’m getting inspired. I think I’ll try making a nice crusty Italian bread tomorrow when he’s here for dinner. (Watch for a post in the next day or two.)

In the meantime, tell us about a special ritual that you have as an ingredient in your life! It doesn’t have to be a weekly ritual.  One of my favorites is a once a year gathering with girlfriends in the Catskills!)

If you could mix in a new ritual, what might it be? Post your ideas so we can share in them! ….and then forward this post on to suggest a new ritual (once a week? once a month? once a year?) to someone you love.

Why not make kneading life a part of your weekly ritual for the year? Take this link to join my contact list!

Miss the post on fougasse?  It’s easy and delicious!

As always, I hope we find ourselves some day together around the kitchen table with our hands in dough!