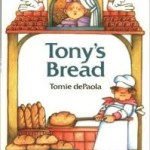 Panettone is an Italian sweet bread with a bit of a legendary past.  My favorite story credits it to a baker named Tony who created a special loaf in order to win over the parents of his intended love. In Italian pane means bread so it makes complete sense to me (and to children’s author, Tomie dePaola!) that this was the bread of Tony: pane del Tony.

Though people may disagree on its history it’s likely that the originator of the panettone lived in Milan around the end of the nineteenth century.  It’s no wonder I love this bread.  It’s Italian like me, though in this case I have to admit that the people of Milan were a much more refined lot than my rough and tumble Sicilian ancestors. 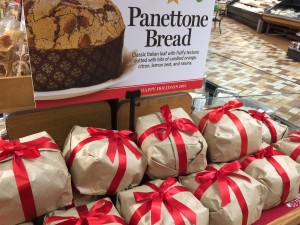 Around the holidays packaged panettones are everywhere!  Darrell and I have eaten our fair share of them but this is one bread I prefer to make at home.   It’s a no-holds-barred process.  If I feel like an apricot cranberry combination so-be-it.  If I’m in the mood for a chocolate-orange-almond combo that works, too.

It’s got a simple elegance to it, especially when I pair it with a good cup of tea.  In texture it’s a bit dense and dry, in flavor it’s sweet but not too sweet, and it can handle a good slather of butter as well as be nibbled away just as it is.

For all of the perks this sweet bread has, I have to confess that I’ve had a panettone flop or two.  Yeast has to really work hard when you load up dough with sugar, butter, eggs, and dried fruit. I also have to closely watch this bread in the oven because it begins to get that beautiful brown color that convinces me that it’s finished baking long before it’s done.

Panettone has cast its spell in this house and its magic is worth the extra effort.  When my daughter’s always-hungry boyfriend, Josh, saw this week’s panettone sitting on the counter his eyes grew wide.

He confessed that of all the breads I make (and he’s sampled quite a few) panettone is his favorite.  I was surprised. Had he had my panettone before? Josh was quick to remind me about a slightly undercooked loaf that he’d intercepted on its way to the compost months before.  He’d taken it home and eaten every crumb. Its magic had seeped into him, too. 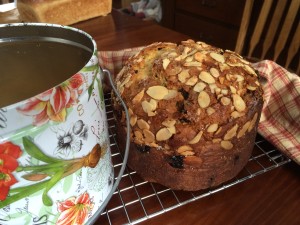 My panettone next to the cookie bucket I baked it in!

When you start making panettone you can buy expensive paper forms but this week I decided to see what else I had in my cupboard that might work.  I found a cookie tin long ago emptied of its goodies and decided to give it a whirl. Lined with parchment, it produced a perfect loaf and didn’t cost me a thing.

Happy experimenting.  Be sure to let me know how it goes!  ….and don’t forget about the Baking with Maple Contest coming next weekend at the Genesee Country Museum!  Remember kids get into the museum free next weekend!  I’ve got some goodies planned to enter but you might want to check out some of my previous entries:  Maple Cream Cheese Coffee Cake, Salted Maple Glazed Popcorn, and Roasted Veggie Pizza with Maple Balsamic Glaze!

Hope to see you around the bread bowl one day soon! 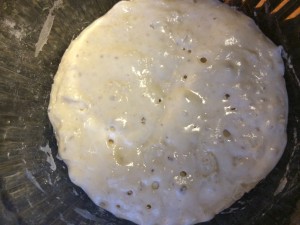 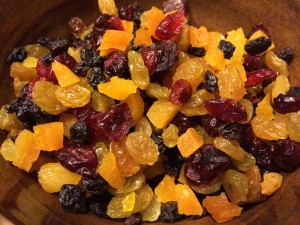 1 1/2 cups (about 9 ounces) combined dried fruit (my favorite blend is 1/2 cup each of golden raisins, dried apricots, dried cranberries, and slivered or chopped almonds though my daughter likes a chocolate add-in and Darrell loves currants)

Make the starter the night before.  Combine all ingredients in a medium-sized bowl, cover, and allow them to rest overnight (8 to 12 hours).

Make the dough by combining all of the dough ingredients (including your starter) except the fruit.  Knead into a soft, smooth dough.  A dough hook and a mixer really are helpful with this dough.  Allow to rest for about an hour.

Gradually begin to add in the fruit just until combined.  (King Arthur warns that too much working of the fruit will release fruit sugar and cause a slower rise) This part can be challenging but stick with it.  Remember slow and steady wins the race. 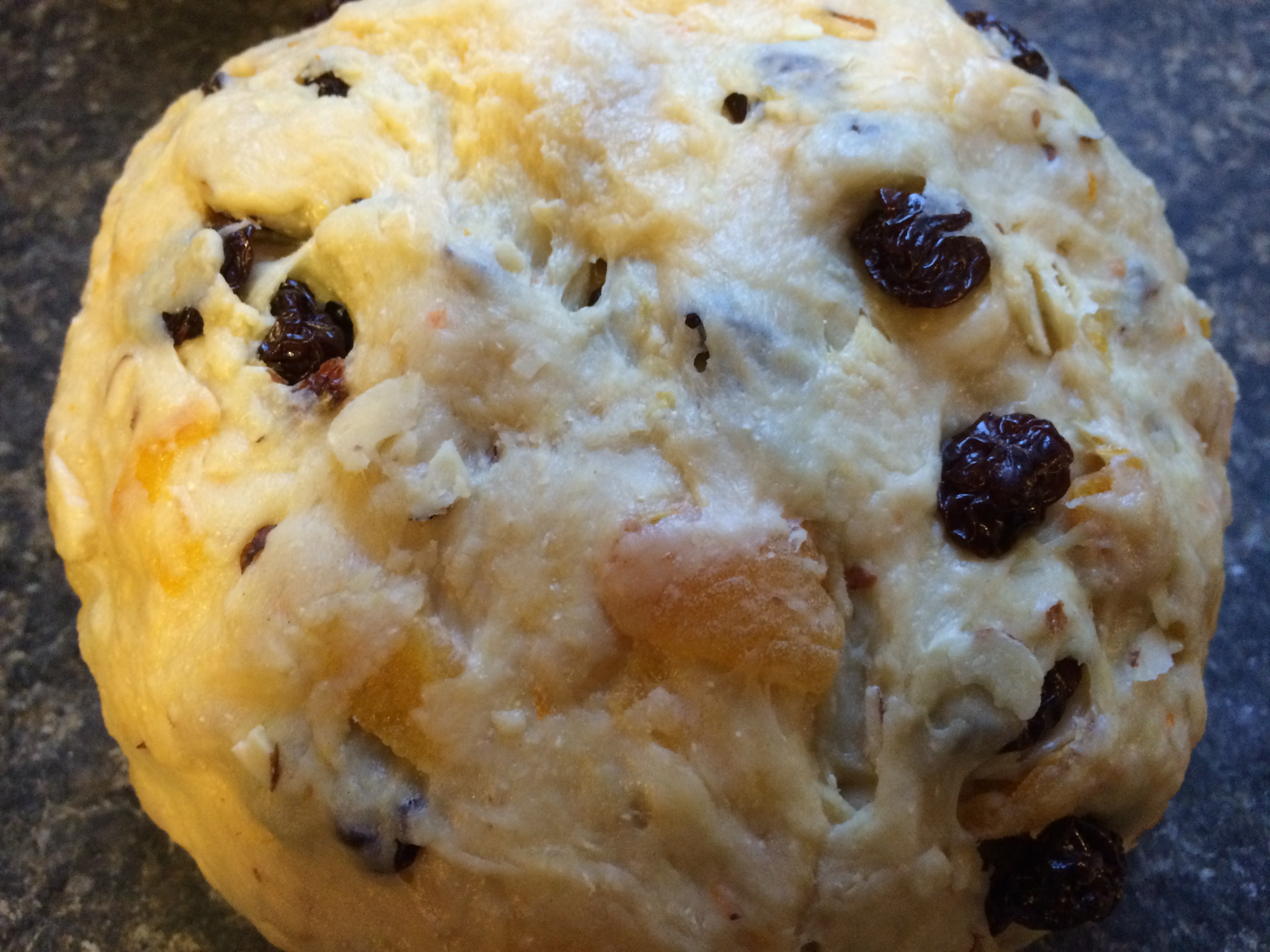 Gently shape the dough into a ball.  You can place it into a panettone pan or paper mold if you have one but many other things will work well, too.  I lined an old cookie tin/bucket that I found in my cupboard with parchment paper and it worked great! 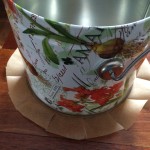 First, I traced the bottom and cut tabs around the center so it would fold nicely into the bucket. 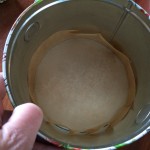 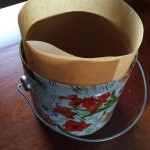 For step 3 I folded the parchment in half then formed it into a circle tucking one end into the other.

Cover and let it rise (if you’re using one) for at least 2 hours.  I’ve generally let it go 4 (or more!).  It will puff some but not double in size.

Before putting it into the oven I like to brush it with a little egg white mixed with water and sprinkle it with sugar and slivered almonds.  As an alternative, use a knife to cut an X in the top and place 1 tablespoon of cold butter in the middle before baking.

Bake in a preheated 350 degree oven for 45 minutes.  Tent the loaf with a piece of foil if it browns too quickly and continue baking for another 30 minutes to an hour.  It will brown and give appearance of being baked but PLEASE note that baking times have varied widely for me.  This is one of the only loaves that I use a thermometer for.  The internal temperature should be around 190 degree. 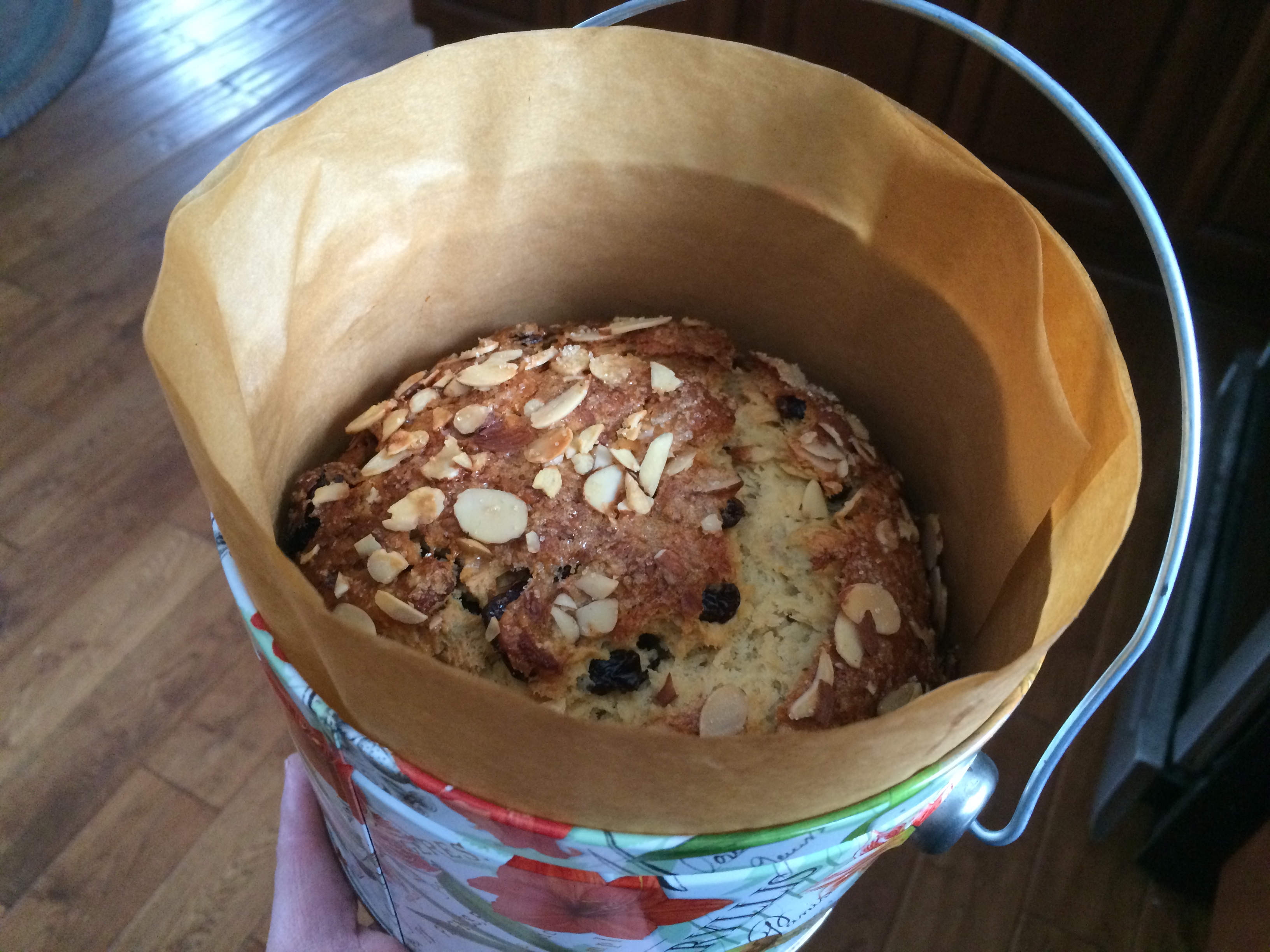 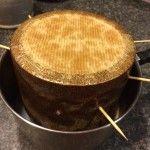 A skewered loaf I did at Christmastime in a paper liner.

Remove panettone from oven.  It can collapse a bit when cooled upright so I’ve angled my loaf to cool and rotated it periodically through the cooling.  I’ve also skewered my loaf and turned it upside down to cool when I’ve used paper molds….and, of course, I’ve cooled it upright and it’s all gotten eaten anyway!

This bread keeps for a week or two and freezes well!