Even in the last few months of life as her body and mind failed, my mother continued to teach me lessons about life. She wasn’t the only one. There was another old soul in my life. He was 6.

When I asked my grandson, Patrick, if he wanted to tag along on a visit to see Grandma Ann, he had no hesitation. 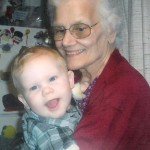 Mom and Patrick:
pals since birth

They’d been pals since he was born.

He hoisted his drooping pants in one swift motion and took off for the game cupboard, grabbing a deck of cards.

“What are the cards for?” I asked.

He looked at me a little puzzled, ”Grandma Ann loves to play Memory” he said matter-of-factly.

She’d had a growing despondence for weeks, rarely making eye contact or even speaking. He’d been along on many visits. Had he missed the obvious? How was I going to break it to a 6 year old that the grandma he loved couldn’t match up the cards any more?

When we arrived at the nursing home, we found Mom in her wheelchair sitting across the table from my brother, Mike, and his wife.  She stared blankly, seemingly disinterested in conversation.

Patrick squirmed a bit, grew tired of small talk and began laying out the playing cards.

Mike started us out, made no match, and the game moved on first to his wife then to me.  There was a long, silent pause when the turn should have been Mom’s.

“Go ahead, Patrick ,” I said as she gazed at us blankly, “take your turn next.”

“I….uh….well I don’t think she can play today, Bud…” I started. Did I think slowing down my words would make it easier for him to understand?

Ignoring me, he turned to her. “Grandma Ann, do you want to take a turn?”

In our wide-eyed silence and uncertainty about what to do to make this better for him, Mom moved her hand. Maybe an inch.

He placed his hand on top of hers and lifting it gently, moving his their hands together carefully over the cards. “How about this one?” he asked flipping one over. 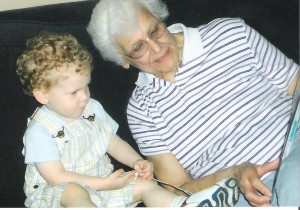 The journey of their hands continued as he moved on to another card giving her the patient attention she’d always given him.

“Sorry, no match,” he said completely undaunted (where had all this matter-of-factness come from?) He moved on to his first turn without missing a beat.

I wished I could see my mom the way he did. Simple. Loved. Grandma. He didn’t see her fading memory and inability to do the things she had once done with him. He met her where she was.

Weeks later, on another visit, I asked him to pick something off the shelf for us to do. He returned to the table with the game of Life and started pulling the pieces out of the box.

I was beside myself. Here was my mother in the process of dying and he’d chosen the game of Life? 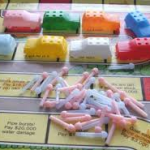 I could tell by his expression as he examined the pieces that he wasn’t quite sure what to do with them all. He labored over it for a couple of minutes and then turned to me.

“Grandma,” he said, “it’s complicated and way too hard so we can’t play the game of Life by the rules…”

It took a minute for his words to soak in, but once they did we began making adjustments. In the process, he declared himself the official spinner of the wheel.  My fate rested in his hands.

And later, I cried. 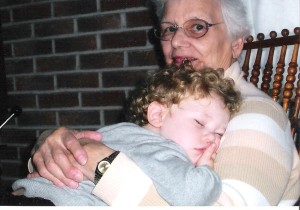 My mother had held Patrick in the safety of her arms many times, but the tables had turned.

My mother had held Patrick in the safety of her arms many times, but the tables had turned. In her growing vulnerability, he seemed to be holding her not with his arms but with his love.

At 6, his wise words are good ones to live by.  Sometimes life does feel too hard and who says we always have to play by the rules?

This year as I venture into the unknown of baking bread each week, I’m going to take his advice to heart.  Likely it won’t go exactly as I plan, things rarely do. I may need to adjust ingredients based on what’s in my cupboard (or what I’ve forgotten to pick up at the store!). Lacking some of the technical expertise of a master baker, I’ll have to wing it based on what I’ve read and experienced.  It’ll all work out in the end. And if not, what difference will it really make?

There will be time to regroup and try again, or perhaps it’ll just be time to take a break, put bread aside for a while and just gather together at the table.  Maybe someone will even show up with a game.  Remember, too, that bread is a part of my blog, equally important are stories about life.

In the meantime, I’m readying some recipes and gathering ingredients in anticipation of my January start date!  Stay tuned…

If you’ve shared a special moments with an elder or a wee one in your life, or had to adjust the rules of Life in some way….take a minute to share it in the comment section below!  Don’t forget to sign up on my contact list so we can share this journey together. It’ll be good for us all!

another of my favorite post about mom’s journey with dementia: Taking flight

One thought on “the game of Life…”