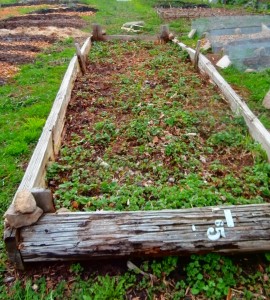 Here’s our strawberry bed starting to come back but note that it’s fashioned from old telephone poles….scavenged!

If reincarnation does exist then at some point in history my husband was likely some sort of scavenger; probably an opossum.  Scavenging is in his blood. Not only do opossums scavenge but they’ll eat whatever they can find…and, well, that’s Darrell, too.

I really took note of how ingrained it is in him one Spring when he was doing some remodeling.  For months, when he arrived home from work there was a lapse of time between when his truck pulled into the driveway and when he actually came into the house.

“Nothing much…” he’d say coolly and change the subject to dinner.

It didn’t matter what he said.  I was on to him.  He was definitely stashing stuff out in the barn.  We’d had this discussion before.  As long as whatever it was stayed in the barn and didn’t get dragged into the house, I was OK with it.

It came to a head one summer afternoon when he announced that he was going to build a greenhouse.

“A greenhouse?” I questioned.  “How are you going to do that?”

Slowly but surely he began pulling out old windows, used deck boards, telephone poles, and other scraps of things he planned to re-purpose.  It shouldn’t have surprised me (but it did) that he had even claimed 2 sets of sliding glass doors somewhere in his travels. Even the llamas next door couldn’t help taking notice! 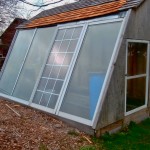 supply catalog, it’s much more, let’s say….unique.  Everything Darrell tinkers with has its own flavor.  It’s part of what I love about him.  And, in light of our recent Earth Day, there is something to be said for reusing materials and making do with what we have.  It fits with our decision to simplify our lives where and when we can.

Who cares if the greenhouse has needed a few leak repairs or that one glass door shattered when it got caught in a windstorm? It’s early May and we’re already eating greens that survived the winter so who’s complaining? 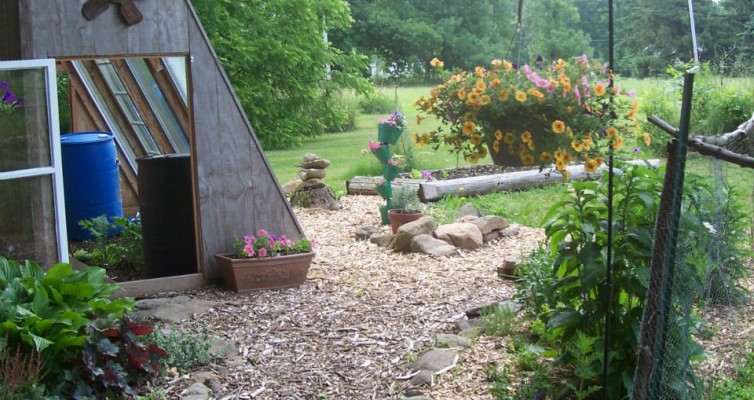 It’s too bad that tinker-ers seem to be a dying breed.  The word tinker has been around since the 1200s and originally seems to have been a person (perhaps a tinsmith) who traveled from place to place mending metal utensils. At some point, the definition broadened in some circles to include any unskilled or clumsy worker; bunglers and botchers, too.   Which of these best describes Darrell?  Take your pick.  Sometimes the botched things end up working out the best! 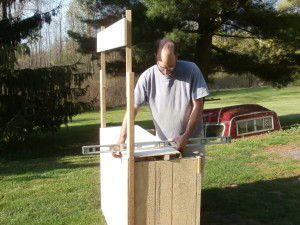 His tinkering gets him lots of calls from family and friends who want to pick his brain or propose a project.  My favorite request came from our niece, Ava, who desperately wanted a lemonade stand.  When Uncle Darrell got one built for her (with many scavenged parts), she traded him some fish she’d caught, a clay pot she’d made, and some railroad ties that she explained were free because she’d just found them laying there!

Doesn’t everyone need a tinker-er in their life?

As a verb, Merriam Webster states that to tinker is to try to repair or improve something by making small changes or adjustments to it.  Hey, doesn’t that make me a tinker-er, too?  A tinker-er of bread?

Completely inspired, I decided to tinker with the Honey Whole Wheat Bread recipe this week.  My first step was to scavenge my cupboards and refrigerator.  What did I have scraps of that could be kneaded into something delicious? 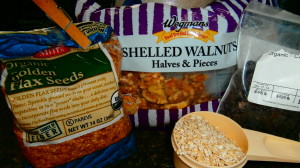 It was all about the ingredients.  Here’s what I found:  some quick oats, a handful of golden flax seeds, walnuts, some currants (why not!), and, of course, our fridge always has maple syrup. 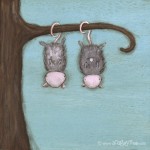 As with all ingredients in my life, sometimes I just have to use what I have and trust it’ll all work out in the end. If it doesn’t, so what?  I’m married to an opossum. Everything I bake will get eaten anyway.

I’ve named my bread experiment Scavenger’s Bread. You may not have all the same ingredients I have but that’s what makes for the fun here!  Use what you have.

I hope you get your hands into some dough this week and take a peek into the back of your cupboards and fridge to see what scraps of this and that you might have (not post expiration date of course!) to throw into the bowl!

Read more about Darrell’s life changing move from optometry to a simpler way of life in Revamping Recipes, Revamping Life.

One thought on “Tinker away, Darrell….”