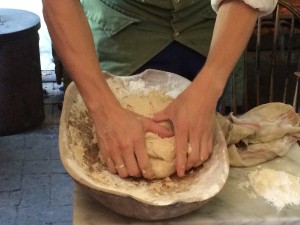 It was affirmed in me as Darrell and I traveled back in time to colonial Williamsburg that in life, as with bread, it’s often best to go by feel.

Though I was inspired into a life of bread by my mother and grandmother, I’ve become a bread baker through time and experience.  I’ve resisted my impulse to buy a stand mixer (a bright red one!) opting instead to feel my way through the subtle changes that take place when I knead.

Because I keep life simple, it’s easy to live without the mixer but I have an essentials list.  It’s includes Peter Reinhart’s book The Bread Baker’s Apprentice, my kitchen scale, and real measuring cups (rather than an old porcelain teacup like my grandmother used.)

Standing in front of a clay oven watching the bread makers in the colonial village at work I wondered, “What would life be like without precisely measured out recipes, temperature gauges, and the occasional YouTube tutorial?”

When I first met Tiffany, one of the 18th century bakers, she gave me the low down on ovens and the baking in the 1700s.  Built mainly from brick and clay, some ovens were portable and easily rebuilt in places of long encampments during the American Revolution. 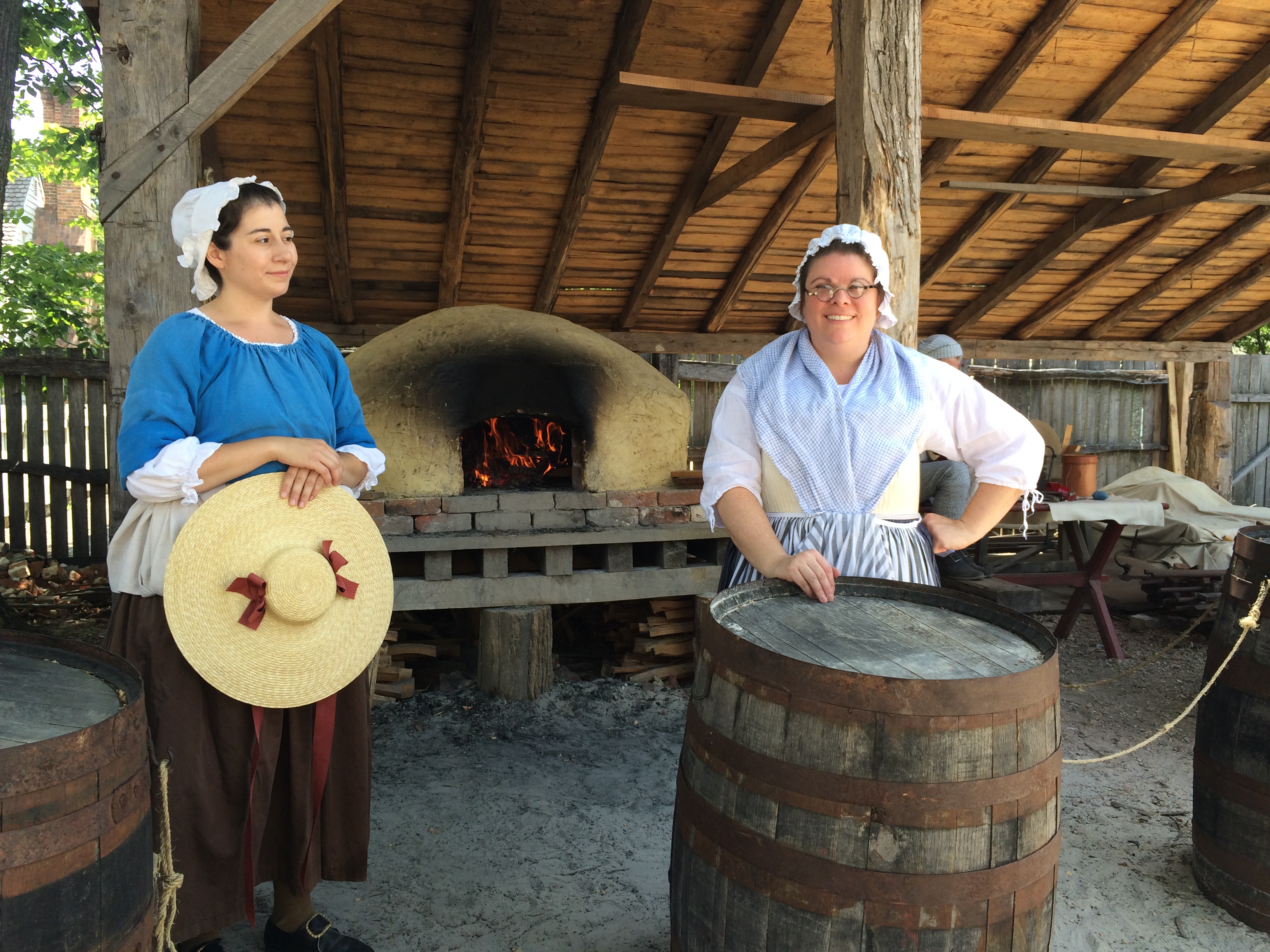 Tiffany (right) and Ana in front of the bake oven

That meant they were likely making due with a minimal number of ingredients and not perusing cookbooks for fun like I do!

“There were receipts (recipes),” she explained, “but people were also going by feel. Today it’s easy to get lost in a recipe and instructions with everything so spelled out, but we’ve lost something in that.  We’ve got to make contact with our ingredients.”

I resonated with her words.  Whenever I experiment in the kitchen, I learn.  Granted, there are times when I wish we still had a dog around to lap up my mistakes, but each time (failure or not) I have come to know my ingredients and the process of bread much more intimately. 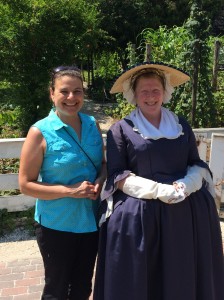 While I have time to contemplate bread, I suspect it was much more utilitarian in Martha Washington’s day when bread made up 50% of the calories in the diet of a commoner.  Seeing breaded beets, French style chicken with stuffing, stuffed veal tongue, poached eggs battered, breaded and fried in lard, and even bacon with bread crumbs, it’s not hard to imagine.

Of course these dishes were all found in the Governor’s Palace where the wealthy were also eating white bread (less refined whole wheat seemed more appropriate for the middling and lower sorts.)  Who knew about nutrition? 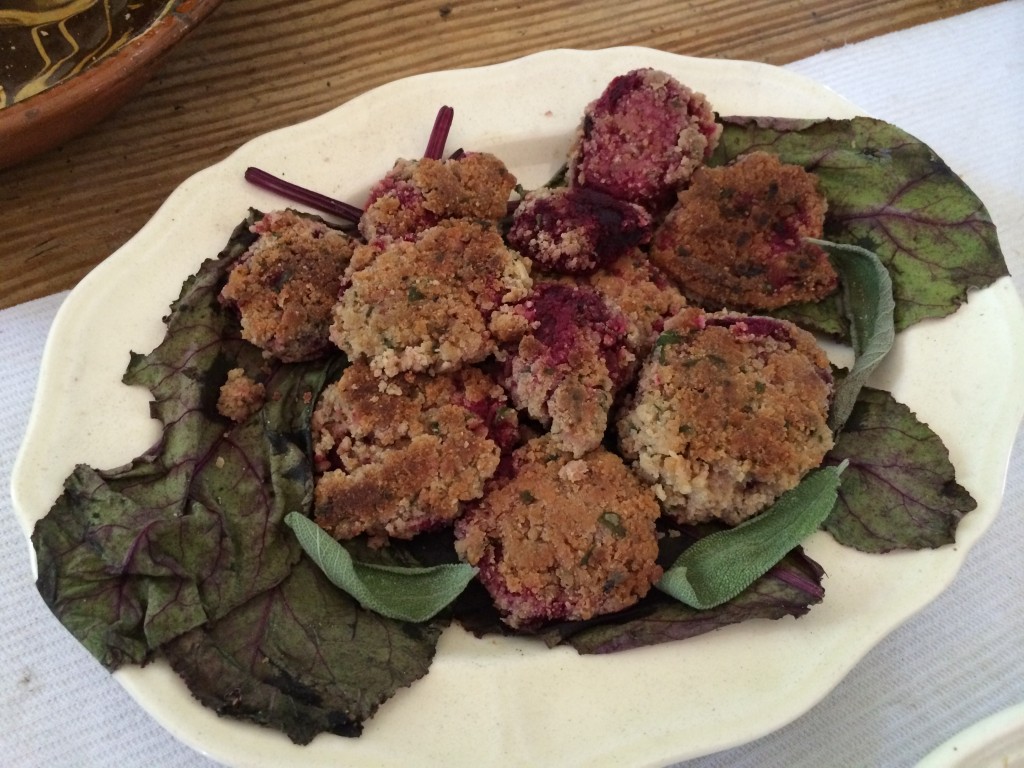 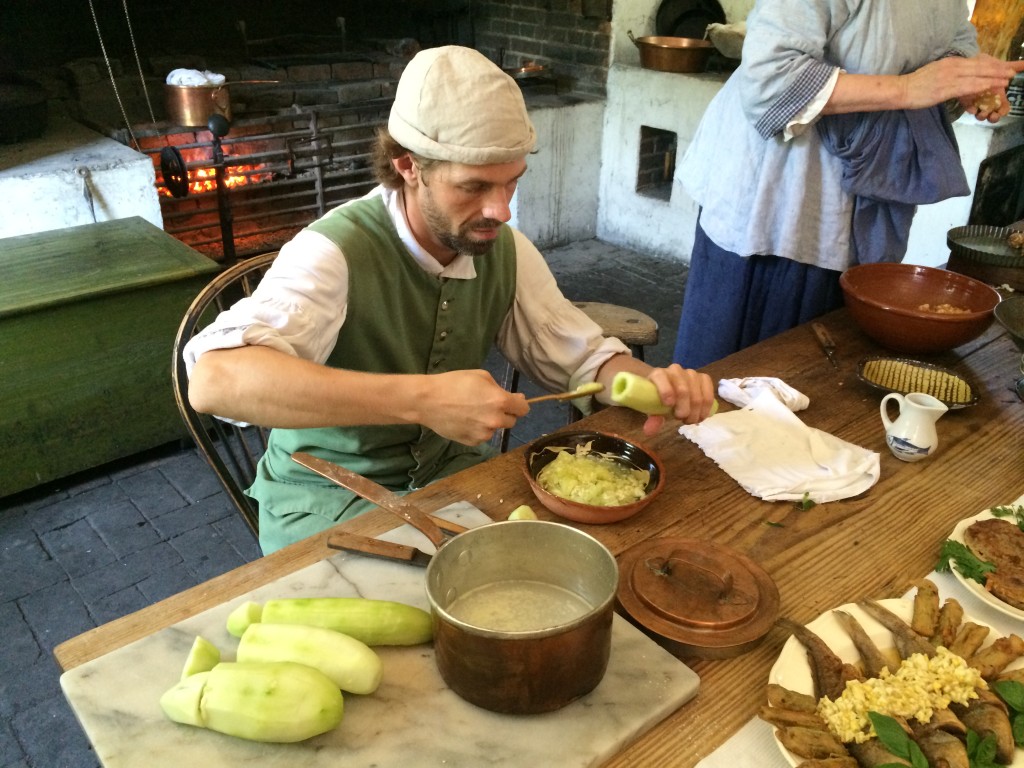 Even the overgrown (tough) cucumbers were seeded, stuffed (with stuffing!) and boiled!

In colonial times, there is an old wives’ tale that the gentry was the upper crust (a term that may have related to those early breads).  Since the upper crust of the bread was superior, it was served to wealthy.  As for the bottom of the bread (which could have been over-baked because it was sitting on the hot oven floor)… well that’s likely what I would’ve been eating!

I wondered how much the quality of the cook affected the quality of the bread. Back at the armoury, I watched Tiffany put her arm into the hot oven and explain, “I can feel the temperature by how far I can reach in and hold it.  I know what 425 degrees is for me although it might feel different to someone else.”  I had no doubt the bottom crust of her bread would come out every bit as good as the upper one.

She was in the process of producing 40 one-pound loaves of bread in much the same way that the cooks had in the 18th century when they were trying to feed the workers at the James Anderson Public Armoury. 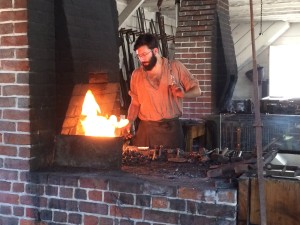 The blacksmith at the armoury

In 1776, Anderson was a public armourer responsible for iron work needed by the Continental Army during the Revolution.  Over 200 years ago, apprentices, journeymen, soldiers, skilled slaves, and prisoners-of-war had been busily working on the site where I now stood.  Each of the men would get a daily one-pound loaf of bread.  Peeking in at the other skilled tradesmen on site, it’s safe to say they earned it! 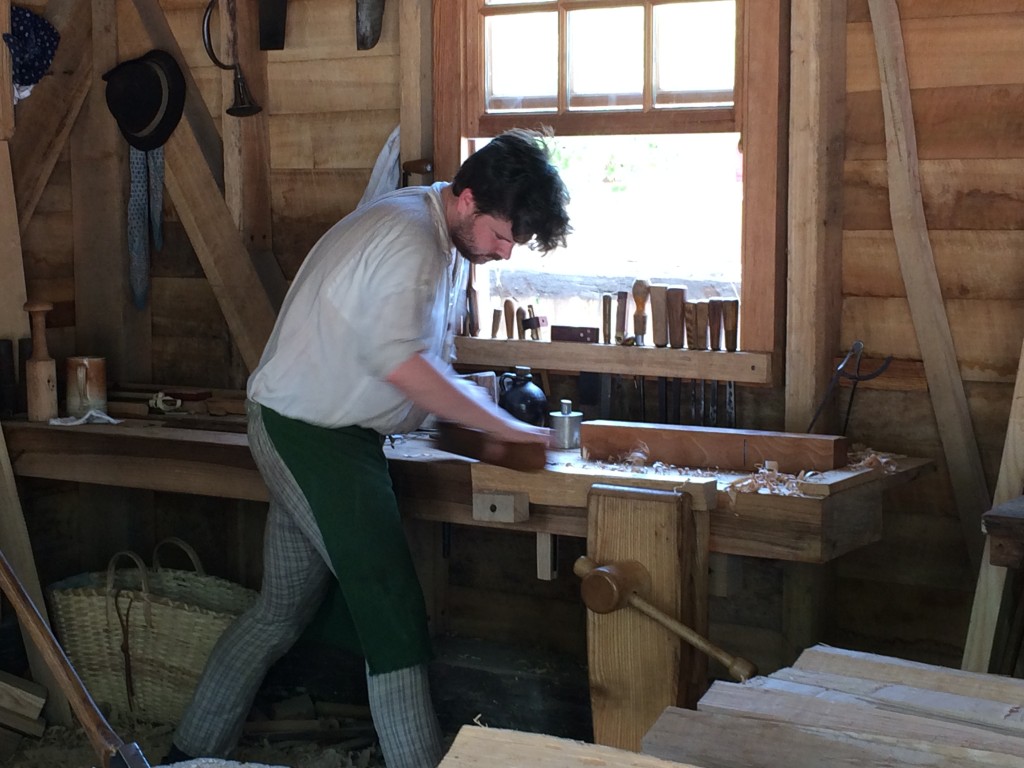 The wheelwright busy at work…but not too busy to stop and chat with us!

Each of the bakers knew when it was time to empty coals from the oven, load the bread, and put the wooden door in place to seal in the heat. 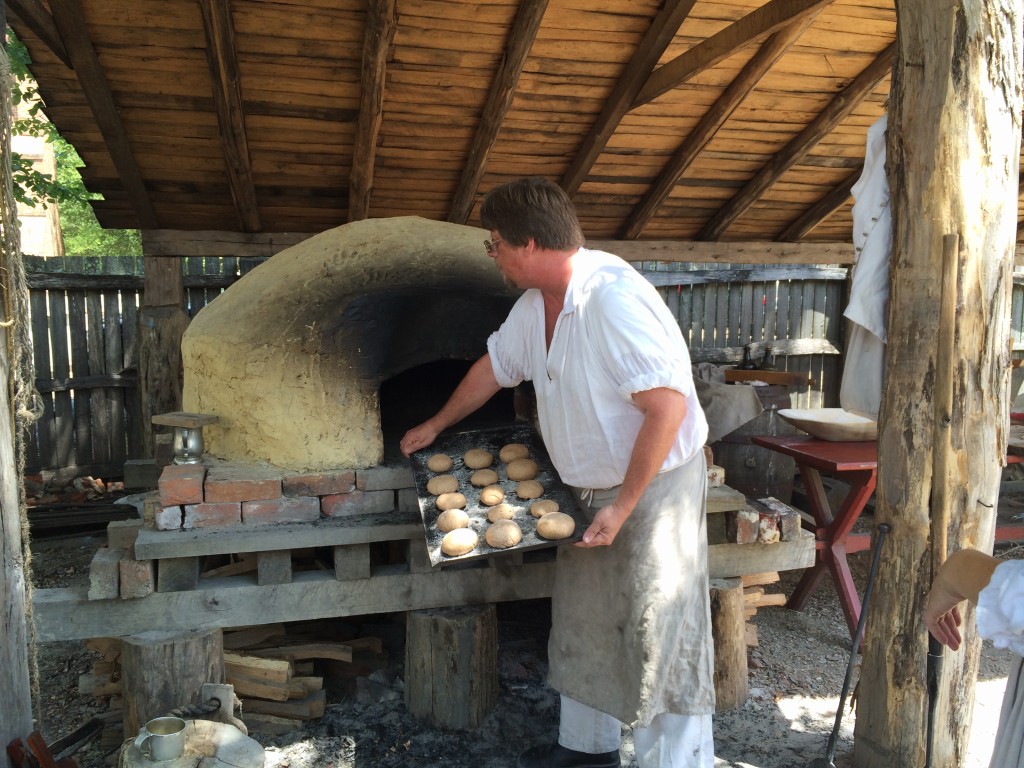 There was no oven door window to peer through. This was a bit of a challenge for me being that I’m a frequent flyer to my oven when I bake.  With no timer set and no visual clues to go by, I could feel my own angst growing.  How would they know when it was done?

It was Rob, one of the bakers who grew up in and around the colonial village, who cued me in. “We can’t keep opening and closing the door.  We’ll lose the heat… but I can tell what’s going on in there, so can you.  What’s your nose telling you?”

It was faint but I breathed in the first hint of baking bread (and heard my stomach growl all at the same time!)  Of course, I thought, going by feel means engaging all my senses!

Not surprisingly, at exactly the right moment, beautiful rounded loaves came out of the oven. 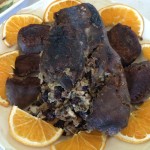 stuffed veal tongue…I was happy not to taste that one!

While visitors are not permitted to taste foods prepared in the kitchens, the experience itself was a feast!  These down to earth interpreters swept me back in time.

I was impressed with their willingness to preserve these traditional methods of baking bread but wondered what prompted such dedication. As I listened closely to Tiffany I may have gotten a hint.  “I think I was born in the wrong era,” she told Darrell and me, “….although……they may have burned me.  I’m a little feisty!”

There’s a lot to learn about both bread and life in the colonial village.  After nearly twenty years of annual treks, you might think I’m tired of it, right? But wit and wisdom abound there.

Who knows, maybe like Tiffany, I was born in the wrong era, or maybe it’s because of conversations like the one I had with a young baker named Joseph who not only was a wealth of information about the history and present state of our wheat supply but had other valuable tidbits to offer as well. 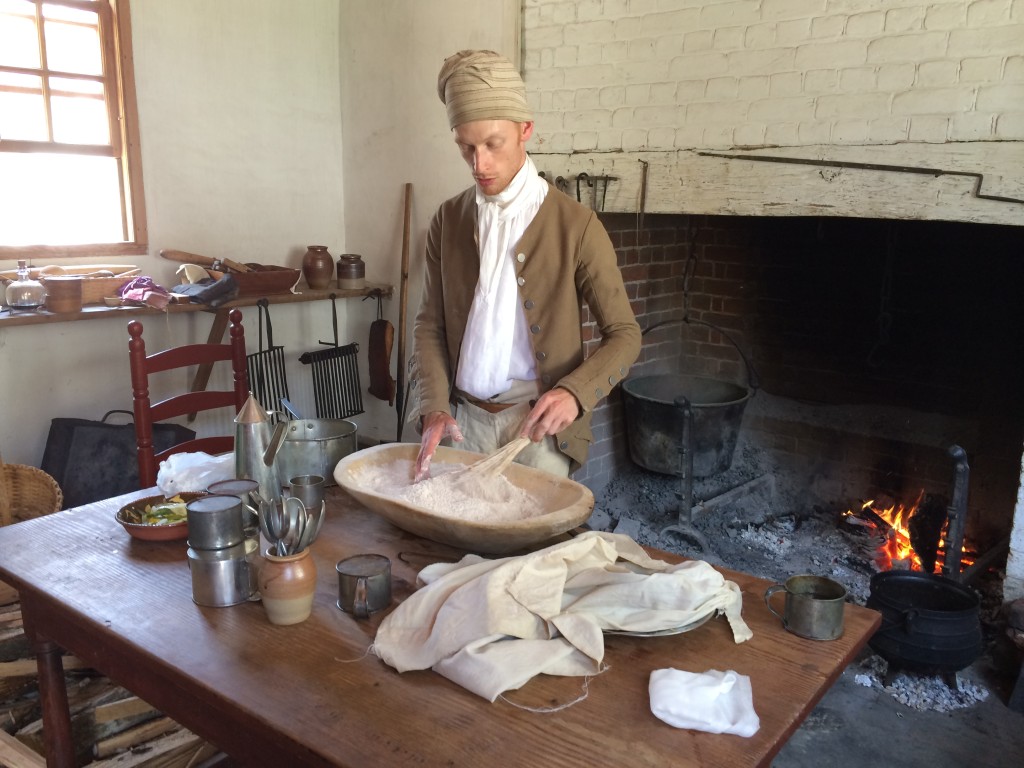 When he was approached by an impatient visitor about what kind of time schedule they were on he took it in stride.  “We’re working at the speed of yeast here.”

Joseph, along with all the other bakers, know that yeast works organically in whatever time it takes to reach its full potential. You just need to tend it and be patient.

What a great philosophy for life.  I’m taking his words to heart much more lately by letting my life unfold organically for a while “at the speed of yeast”  and practicing patience.  I’ll see what rises out of it.  *Since our trip see what we’ve been cooking up in our own back yard campfire in Of bread (pudding)….and life!  You’ll also find more pics from our trip; including some in the colonial kitchen! 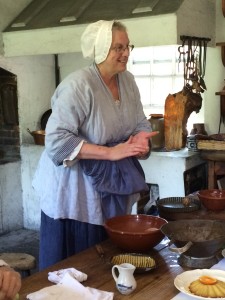 In the meantime you can find out more about the food of this time period on the Williamsburg Foundation’s blog History is Served. You can read my other posts on the historic Genesee Country museum in Welcome to the Hosmer Inn and in The Results are In!

Hope to see you around the bread bowl one day soon! If you enjoyed this post, please consider sharing it or liking Kneading Life on Facebook!!

P.S: Along with these loaves, I watched chocolate rye bread get turned into a bread pudding (more on that, and my big experiment with outdoor cookery, in my next post).  I’m also looking into a colonial-era recipe for Elizabeth David’s Spice Buns….and I took a class on American Heritage chocolate that I’d love to tell you about!

Did I mention I got wound up in a colonial auction and couldn’t resist getting in on the fun?  More on that another day!