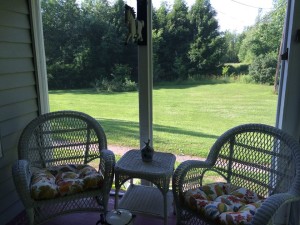 One of my favorite places for morning quiet around the farmette!

One of the perks of being a teacher is that in the summer everyone else in the house still goes to work so I have the farmette all to myself.  I love moving at my own pace as I soak in the quiet while the sun is drying up the dew or melting off the fog.  With only occasional birdsong to break the stillness, I can almost sense the people who first built our home and tended to gardens here.

I wonder about them. Were they newlyweds that had been gifted with a piece of the family farm?  Had they felt the effects of the impending Civil War or sat by the fire in its wake recounting Lincoln’s assassination?  Were they the ones who had abandoned the old coal stove we found out in the barn and resurrected? 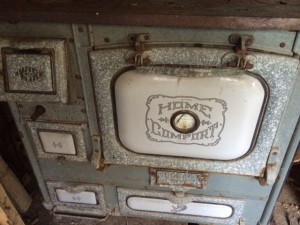 I’m sure they never imagined that nearly a hundred and fifty years later people like Darrell and me would be living in the house with dreams of reviving the little apple orchard out back by the pond.

History, for me, has never been linear.  Timelines, architecture, and politics are important but I’m more interested in a 3-dimensional account where history is lifted off the page and brought back to life by the people who were living it.

It’s no surprise then that when an invitation to attend a 19th century dinner at the Hosmer Inn arrived, I could hardly wait.  The Hosmer Inn, a historic stagecoach inn built not all that long before our little farmette, was built in 1818.  Originally located in Caledonia, it now accommodates the needs of travelers and guest on the village square at the Genesee Country Museum in Mumford where they breathe life into it every time we visit.

Like my summer mornings, it was quiet when we arrived.  Two gentleman had settled in over a game of checkers and, for a moment, the only sound in the room was the clock ticking.  Guests had arrived from as far away as Elmira to join this 1830s feast which was to be a tribute to Jane Austen. 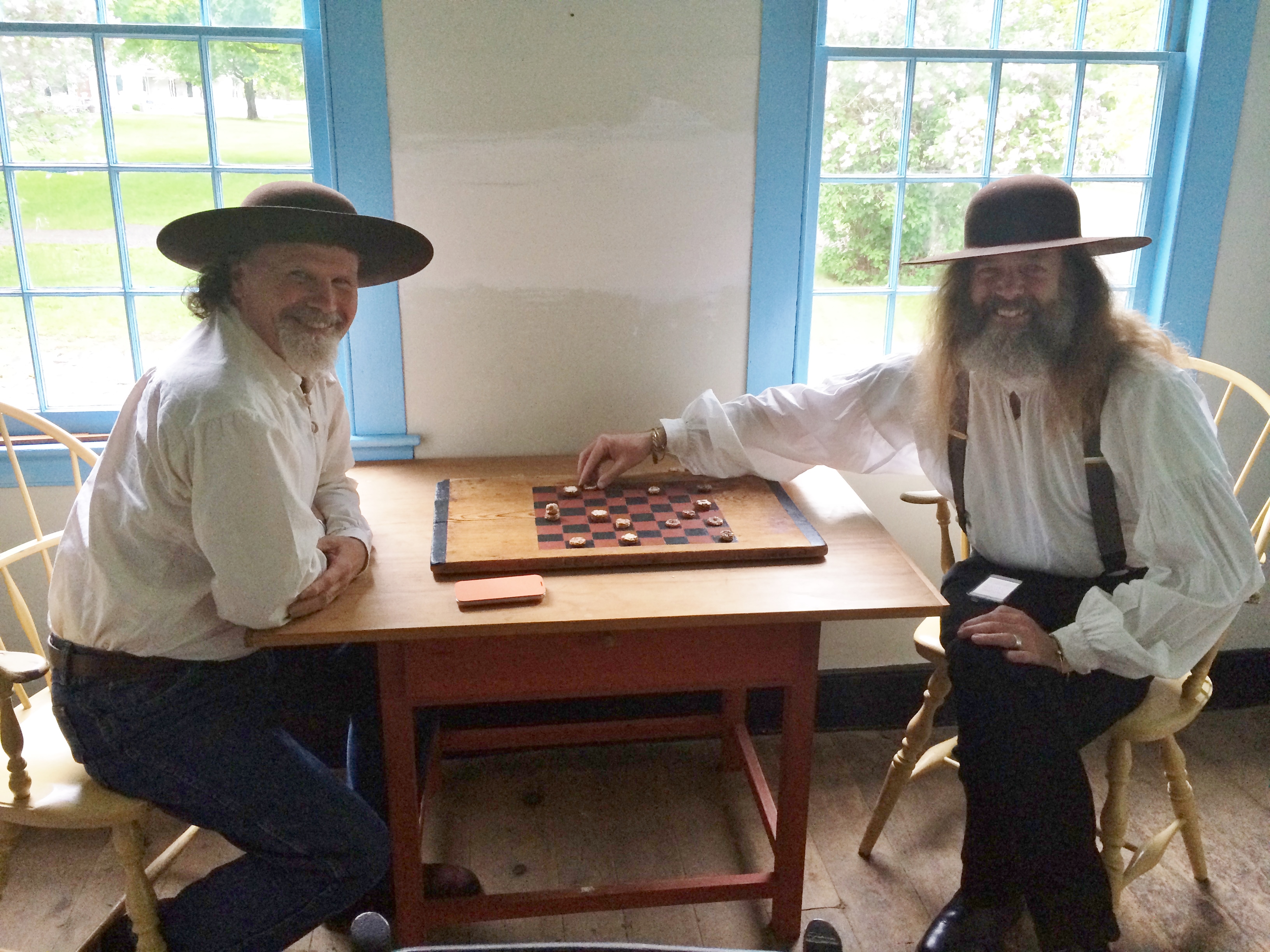 We later found out these guests were the Bridgewater Folk Duo who’ve been singing period music at historic sites for over 15 years!

Our first order of business was a tour of the Inn.  After passing through the bed chambers, we found ourselves in a large gathering room.  Mrs Hosmer explained that she and Mr Hosmer had taken a trip to Buffalo where she took note of a stenciled ballroom.  Inspired, she hired a traveling artist to do some painting for her inn, too!

Mrs Hosmer and I must be kindred spirits! My stenciling around the farmette has gone from the hallway to the dining room and has even spilled out onto the front porch. Though it’s much less elaborate, Darrell did caution my daughter to keep an eye on her new car if she spotted me with a paint brush! 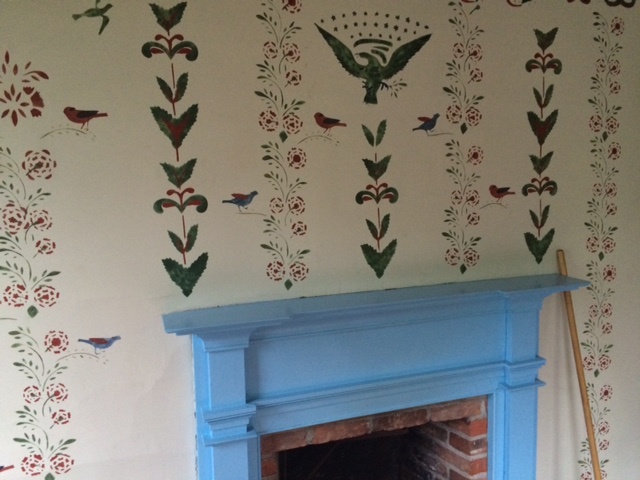 At the Hosmer Inn….

Back in the dining room, our table was alight with candles.  Mr. Hosmer was noticeably absent but Mrs. Hosmer had already informed us that, “If Mr. Hosmer is late for the noon meal, he doesn’t get the noon meal.”  Miss a meal?  The concept perplexes Darrell. 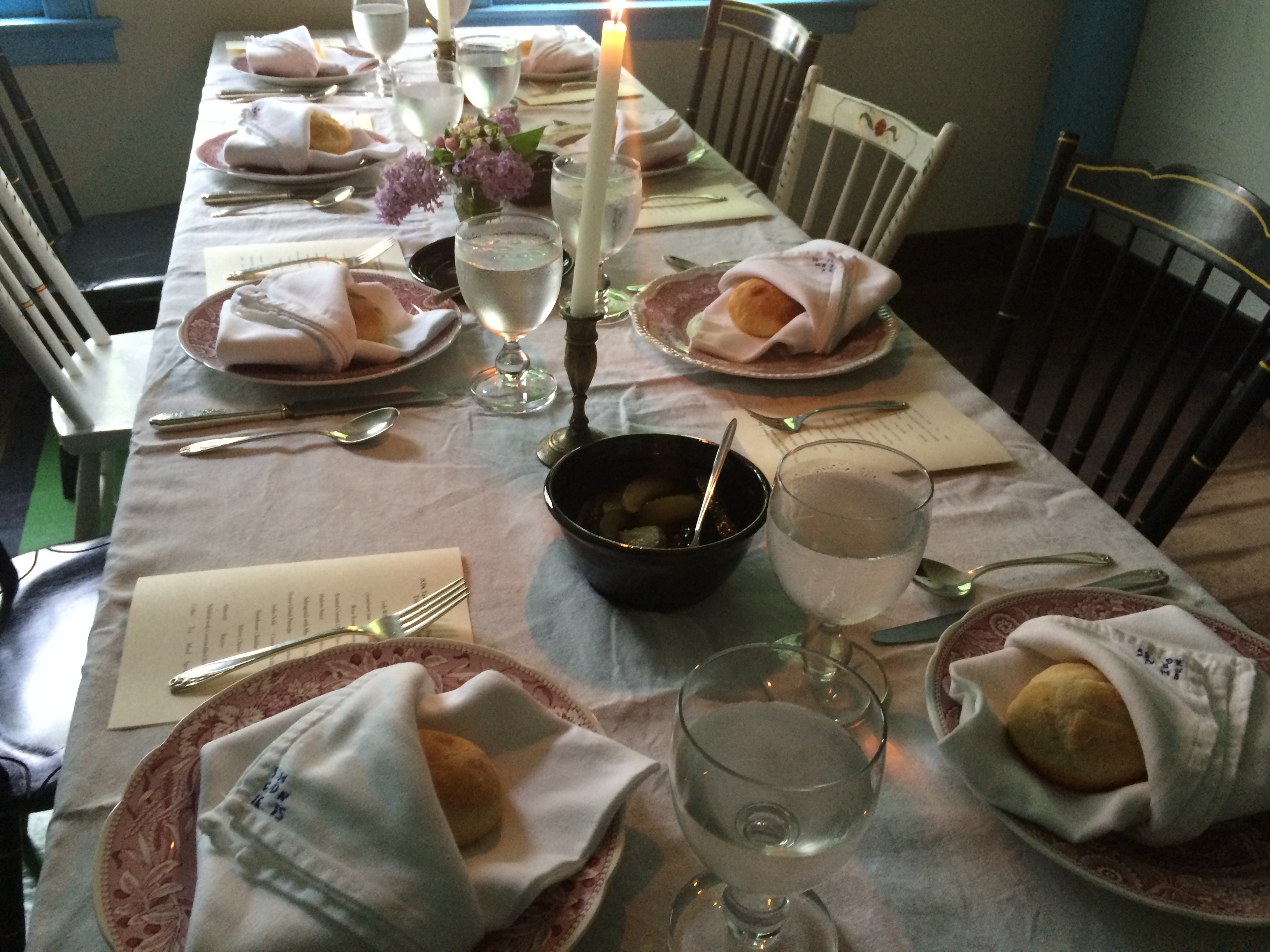 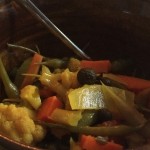 I vow to try everything and am thrilled to see both the India and cucumber pickles that I fell in love with last year.  Lady Williams Bath Buns are a new addition and are delicious with the herbed butter and gooseberry jam.

Nearly everything on the table has a connection to Jane Austen.  Gooseberries were Jane’s mother’s favorite berry and Lady William’s Bath Buns were noted in a letter from Jane to Cassandra, Jane’s beloved older sister.

“But why Jane Austen?” I wonder quietly to Darrell.  “She was an English writer at the turn of the 19th century who never really became famous until after her untimely death.   How did her books cross the ocean without her and make their way to Genesee County?”  I smell a story but am distracted from it by the arrival of the white soup.

According to our menu white soup was mentioned by Mr. Bingley in Pride and Prejudice.  With one taste I understand immediately why Jane immortalized it in print.  There’s almonds, a hint of lemon, and cream. I wonder if it’s too early in our evening to declare a favorite dish. I make a note in my journal: I need this recipe.

At the end of our feast, I think this was still my favorite….or at least in my top 3!

Like the white soup, everything brought out from the kitchen has been well-documented.  The anecdotal notes inside our menu spark some lively conversation! 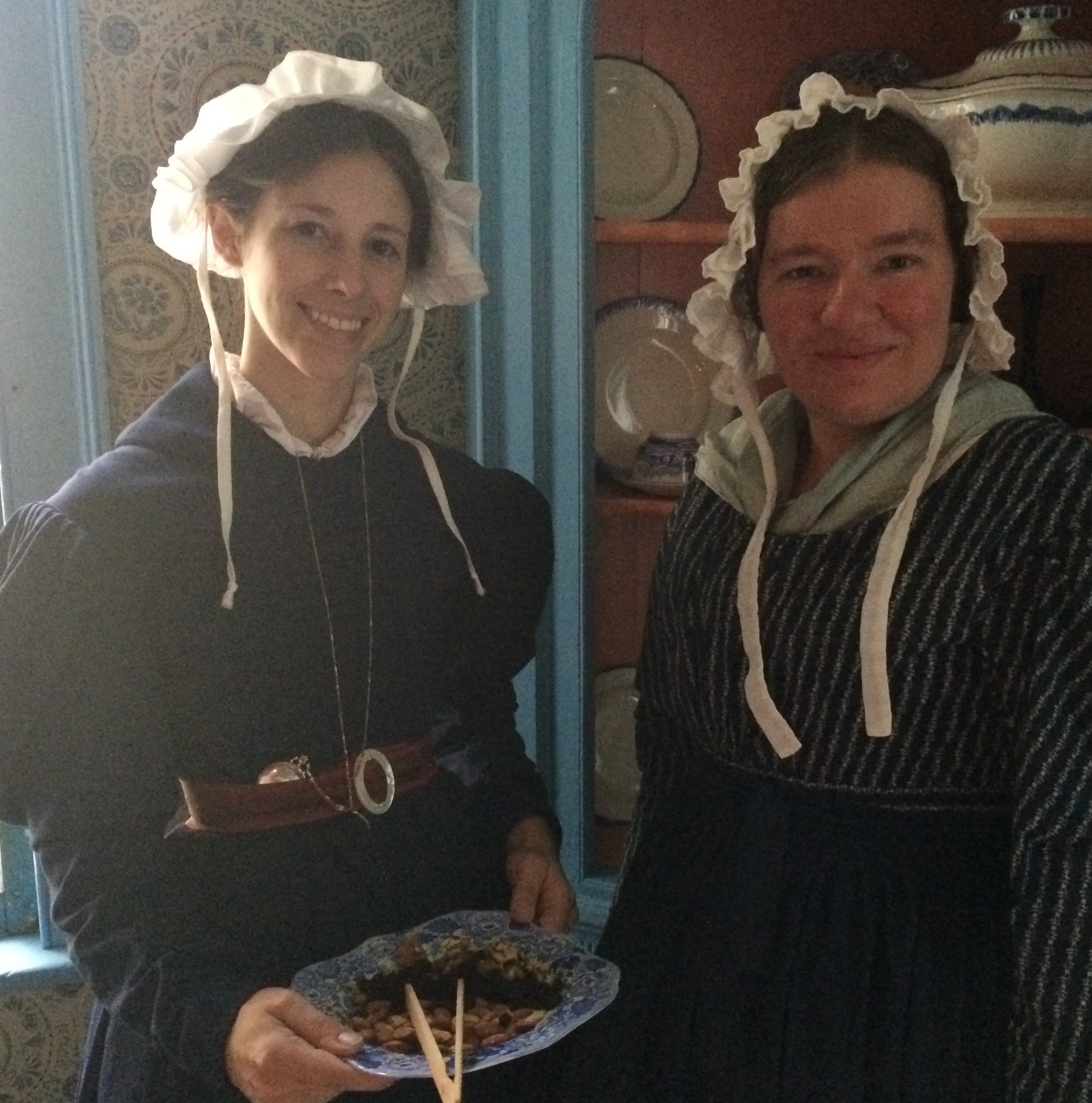 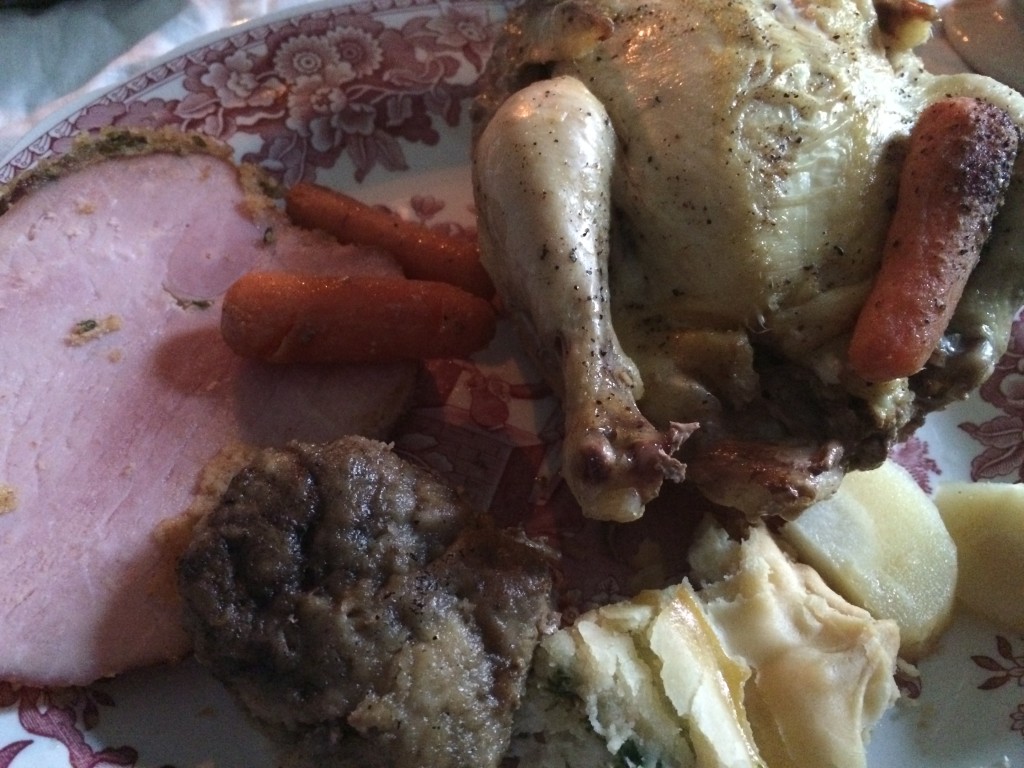 Looking at my beautifully laid out plate, it occurs to me that wearing my stretchy yoga pants might have been a better choice for evening attire.  Since there are so many choices and I’ve said, “Yes, yes, yes, and yes…”  to all of them, when the spiced chicken livers are passed I don’t feel too bad about amending my vow to try everything. Darrell tells me they’re incredibly tasty and keeps up his pace but I’m starting to fall a little behind. 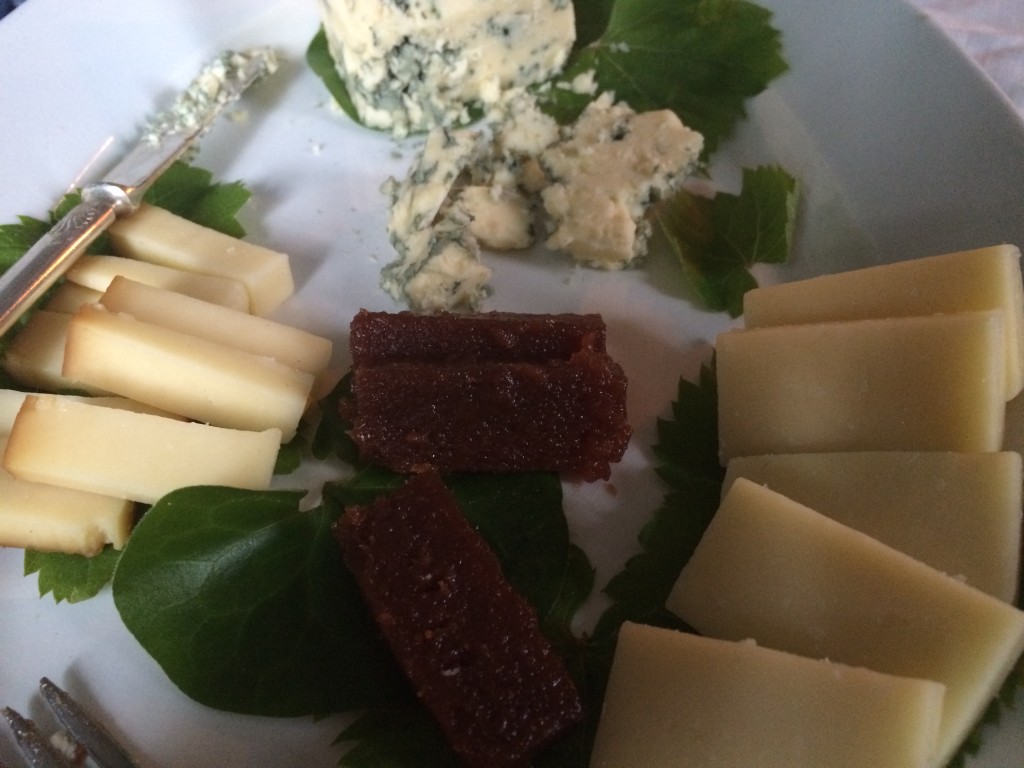 After moving on to salmagundi, cheeses, nuts and quince paste, we have a respite. It’s a welcome chance to digest a bit!

As a part of the festivities, lanterns are lit and our guide takes us exploring into nooks and crannies normally off limits to visitors in the historic homes.  We climb the stairs into the widow’s peak of the Octagon House where, despite my many visits to the village, I get a new birds-eye view. 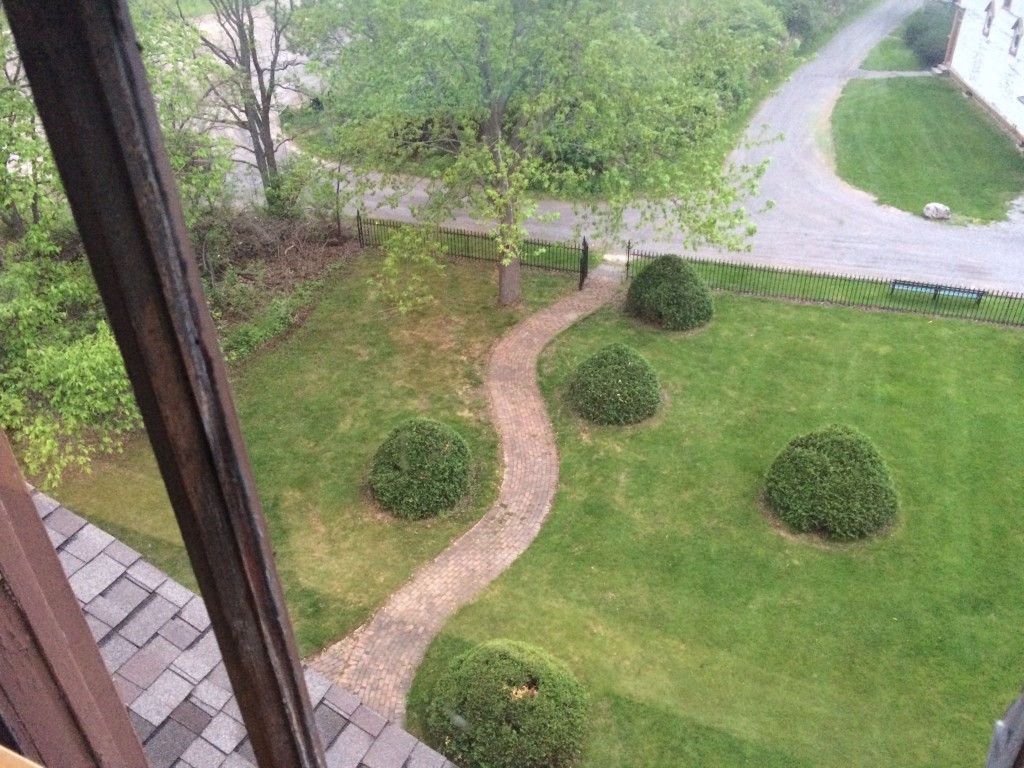 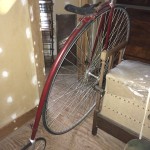 I notice hidden treasures and stories in every room of each house we visit.  We pause here and there to ponder the lives of the people who inhabited them. Were they sitting in the parlor discussing the antics of Jane Austen’s characters?  I half expect to see Sense and Sensibility bookmarked on a parlor table.

Knowing there’s more exploring than we could possibly do in one night, we eventually meander our way back to the Inn.  The table has been cleared and syllabubs with current-filled rout cakes are waiting. (Why can’t this happen in real time at my house?) 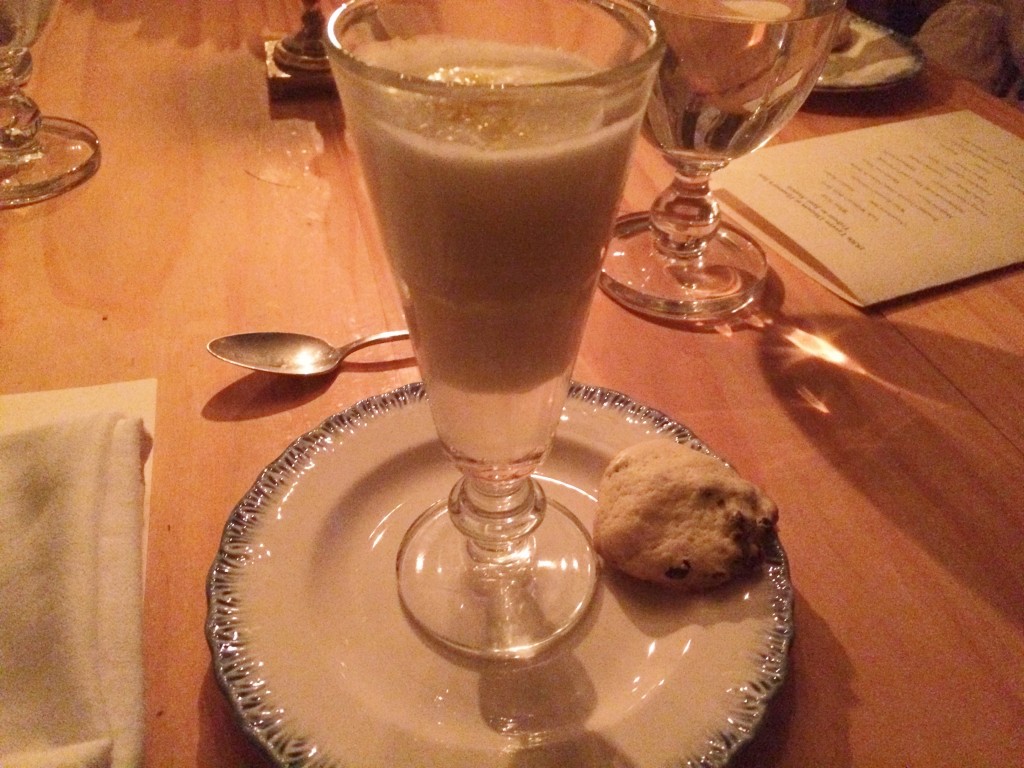 We hear a bit more about the Jane Austen connection. Like the homes toured, Jane Austen’s writings were given new life.  Though Jane Austen died at the age of 41 with only 6 novels to her credit she became popular many decades later, in part, because of a memoir her niece, JE Austen-Leigh wrote about her.  Eventually her books had a revival and made their way to Genesee County into one of the time periods the museum highlights. 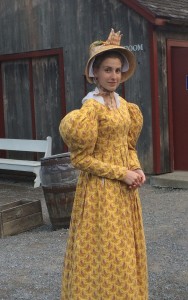 Our guide in the evening exploration of the village!

When we had sipped our last bit of honey mead (a new favorite for both of us!) we felt full in body, mind, and spirit!  We also felt a sense of gratitude for Jane Austen’s perseverance as a writer as well as for museum staff who put this tribute together!

In a world that seems to keep moving faster and over-stimulate us with technology, visiting the museum was a welcome breath of fresh air.  Not only were there people to meet and stories to hear but, more importantly, room to both imagine and ponder the past.

You can find out more about the Hosmer Inn dinners on the museum’s website or check out their other events here!

Hope to see you soon either around the bread bowl or out at the Genesee Country Museum!

PS:  Along with the Jane Austen accolades, the museum deserves some, too.  Their mission isn’t just about preserving buildings (though there are some incredible buildings in the village including George Eastman’s boyhood home.)  The buildings span three time periods.  Some, like the Amherst Humphrey House were built as early as 1797.   There’s tons of history about the buildings and their residents on the museum’s website.  In fact, pour yourself a cup of coffee and linger over them for a while.  Along with other interesting tidbits you’ll discover that Nathanial Rochester’s home is in the village and that he came to Rochester, at least in part, to “set his slaves free and rear his family in a free state?” 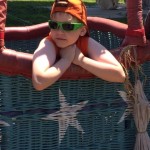 PSS: Knowing there’s never a dull moment at the museum we recently spent the afternoon with our grandson watching the Hunter’s Derby in the meadow and taking a stroll over to see the Intrepid!

You can still read about last year’s dinner: Welcome to the Hosmer Inn

One of my favorite recipes: No-Knead-Take-Your-Time Brioche (it’s sooo worth it!)

Coda (one of my favorite stories about my mom)