Hand cranked cider sweetened with red raspberries for the yeast to feed on!

We have a lot of big ideas in motion here at our farmette.  Most recently, we’re brewing hard cider in the library, pulling all kinds of breads and other goodies out of our outdoor bake oven, and are even trying to make soap from rendered deer fat.  We can’t seem to help ourselves.

Last Spring when I wrote Curiosity Did Not Kill the Cat I was determined to add bee-keeping to our homesteading attempt even though Darrell warned me I’d have to venture into it on my own.  With maple syrup season starting in early Spring and the last of the pears being canned in November he couldn’t see adding to his already full plate.  I plunged in anyway in part because of the alarming decline of these important pollinators and the threat that losing them poses globally to our food supply.

I didn’t give my decision a second thought until it finally came time to pour all those bees into the hive.  Not one to abandon a sinking ship, Darrell offered gentle support from out of bee-sting range. After my first package of bees swarmed (imagine $125 flying out the window), he rallied to help install the second round and held his breath right alongside me waiting to see if the new bees would stay. Happily, after 5 weeks they have filled their hive with comb and seem to enjoy life around here as much as we do. 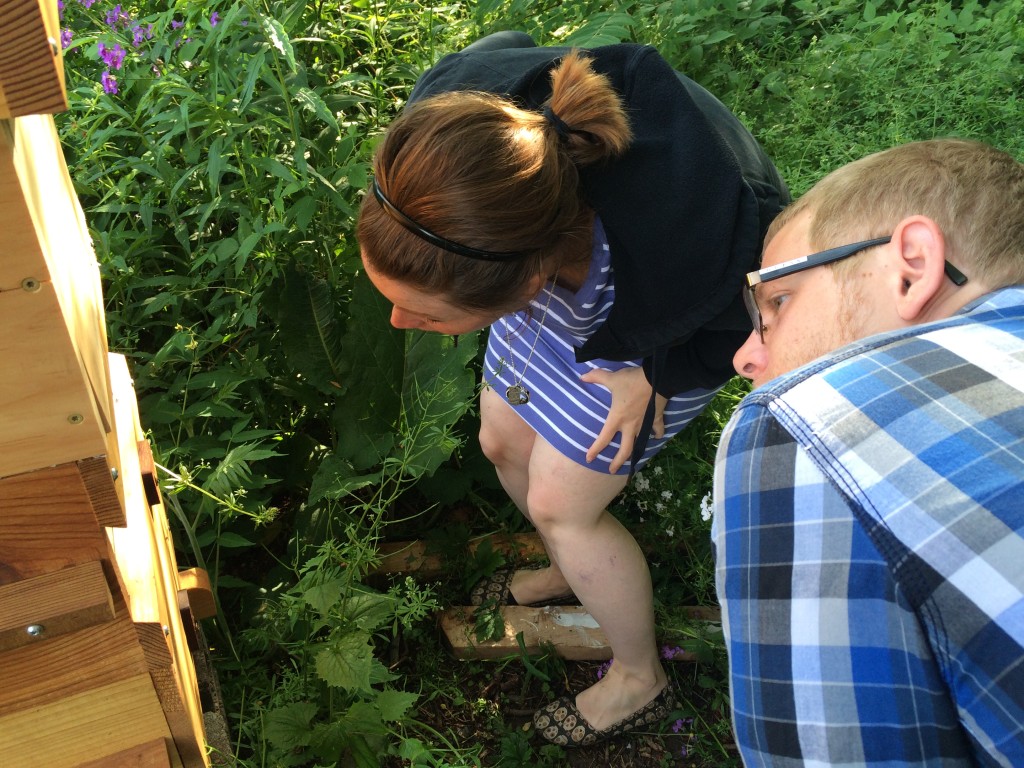 Patrick & Colleen checking out our new family in the hive!

In celebration, how could I resist experimenting with something called Bee Sting Cake (Bienenstich)?  This cake also has a somewhat notorious history.  According to one legend German bakers from the 15th century lobbed beehives at raiders from a neighboring village, successfully repelled them, and celebrated later by baking a version of this cake which was named after their efforts.

This gem is unlike any cake I’ve tasted.  With a brioche dough it’s not the same texture as a layer cake and it’s not exactly a sweet-bread morning cake either.

Traditionally, it’s filled with custard but I fiddled around with a honey mousse that the taste-testers around our kitchen table felt was delicious.  Since the mousse holds up better (and longer) over time, it’s a perfect substitute.  You should also know that I was out-voted by those same taste-testers when I suggested leaving the filling out altogether.  Despite their nay-saying, I think with such an amazing almond-caramel topping it would be awesome all on its own with a good cup of coffee. Maybe they’d reconsider if I added a little orange peel to the batter and coconut to the almond topping?

With or without the filling this is one cake sure to create a buzz around your kitchen table!

Hope to get our hands together in the bread bowl soon!

*recipe includes dough and honey-almond toppingmwhich are a compilation of modified traditional recipes; there’s also an original Honey-mousse of my own. 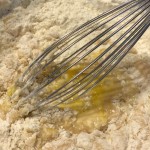 Whisk in eggs, ¾ all-purpose flour, sugar, and salt until blended. (If you have a paddle attachment on a mixer that would work great, too!)

Gradually add an additional 1 cup of flour. Mix until dough is smooth and elastic. Dough will be sticky but should not stick to sides of bowl; if it does, add some of all of remaining 2 tablespoons of flour.

Add butter 1 tablespoon at a time, mixing with a large spatula (or paddle attachment) until it is blended into dough. (Dough will be very soft.) Transfer dough to a work surface and knead by hand a few times to ensure that butter is completely incorporated into dough. (Keep your hands floured!) Shape dough into a ball and transfer it to a medium buttered bowl. Cover bowl with plastic wrap and set aside in a warm place for 1½ to 2 hours, until it has doubled in volume.

Without deflating the dough too much, gently turn it out onto a floured surface and lightly flatten.  Pull the edges to the center to form a ball and allow to rest while you prepare the pan.

Cut a parchment circle to fit the bottom of a 9” spring-form pan. Butter both the parchment and the sides of the pan.

Place dough ball into the pan smooth side up and flatten gently with your palm until it covers bottom of pan. Cover pan and let dough rise until doubled, about 1 – 1 ½  hours.  Make topping while it is rising.

Melt butter in pan over medium heat.  Add the sugar, honey and cream.  Bring to a boil and cook 4-5 minutes until you have a golden creamy syrup.  Remove from heat and stir in almonds to coat.  Cool slightly then very carefully and gently dollop and spread over risen cake. 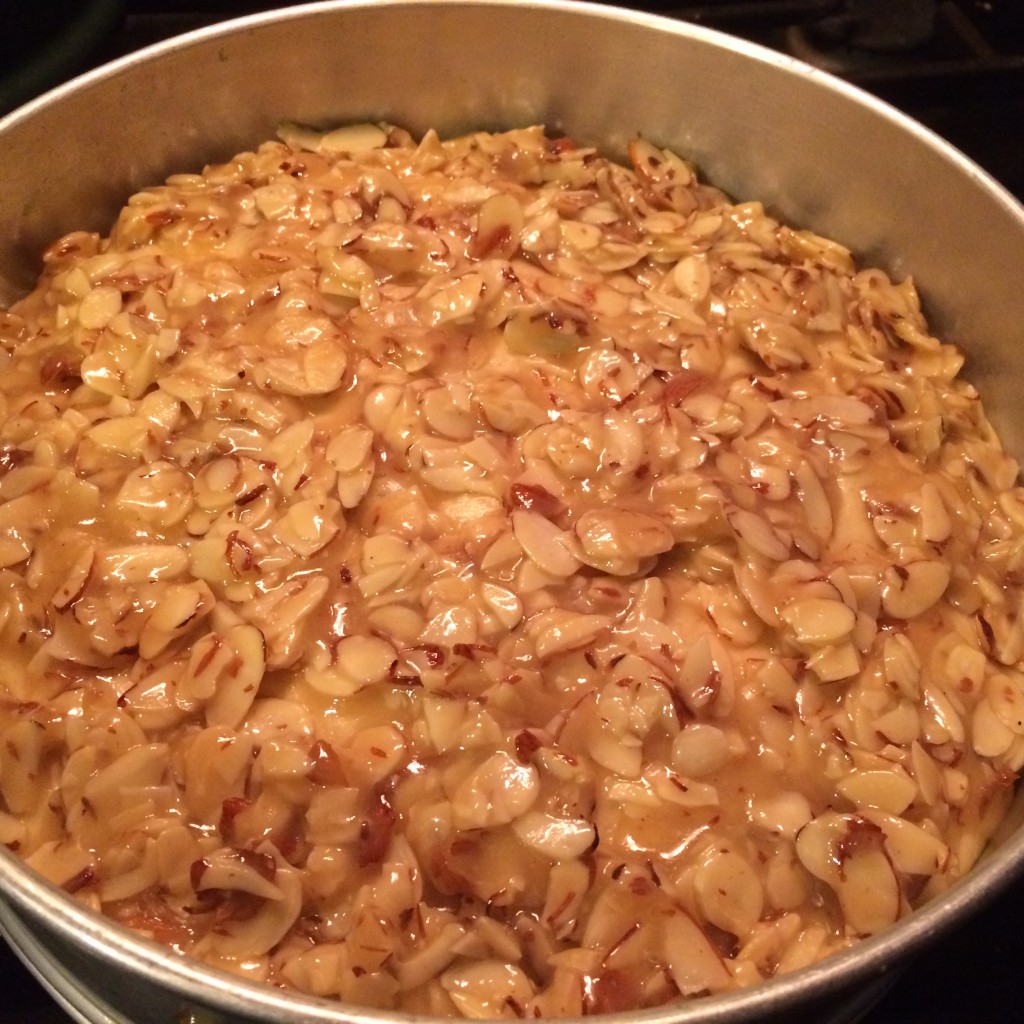 Bake cake in 350 degree oven for 25 minutes, until the almond crust has a deep golden color and the cake tests done with a toothpick.   Cool completely.  (at least 2 hours)  Prepare honey-mousse while it is cooling as mousse will need time to set. 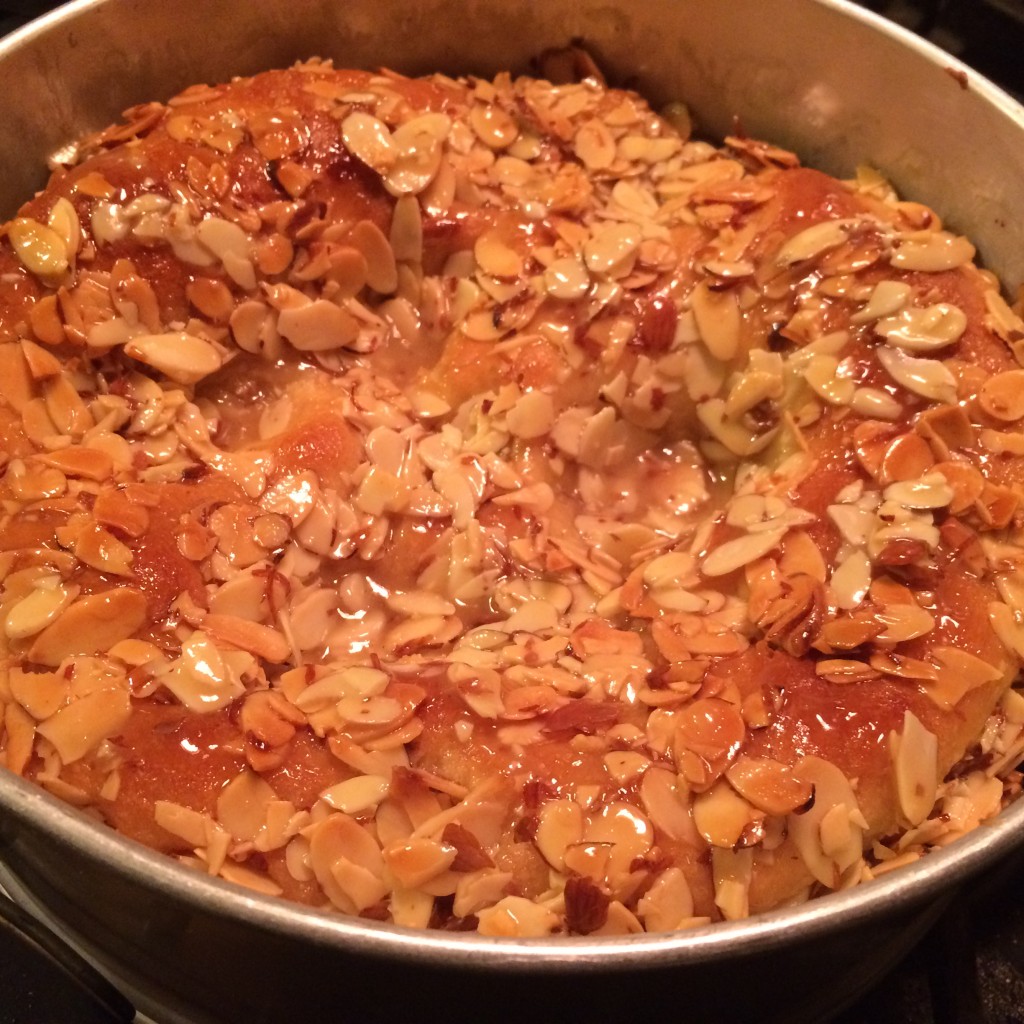 In small bowl, sprinkle the gelatin over the warm water and stir.

In small saucepan, warm the honey.  Slowly add the gelatin, stirring to combine thoroughly.  Allow to cool but not set. 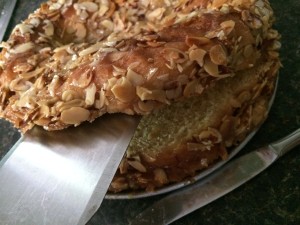 when cool, slice the cake in half

Cover and refrigerate at least 2 hours before filling the cake.  Slice cake in half and fill with chilled mousse.

Looking for other traditional recipes?  Why not try my mother-in-law’s Coffee Cake, Susan’s family Almond Brittle or the Swedish limpa bread that my friend Nancy remembers from childhood?