In early November, at our pre-appointed time, I arrived (with bells on and my notebook in hand) to bake alongside my mother-in-law, Caryn, in the hopes of finally unearthing the secrets to her legendary coffee cake.

With so many family members reporting disastrous results in trying to replicate this recipe (Family Gold: part 1), I decided to stack the odds in my favor. We arranged for Jeanine to bring along her daughter, Ava, who had been a regular in Caryn’s kitchen nearly since birth. I figured if a 9 year old could do it then there had to be hope for the rest of us. 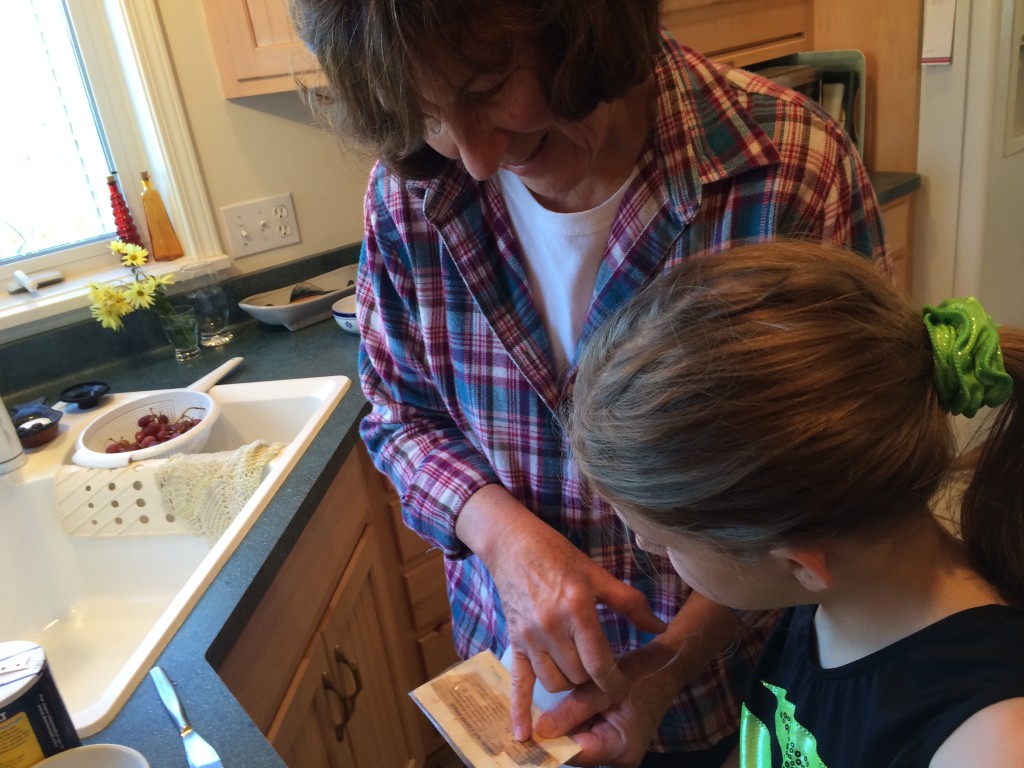 Ava comfortable in working alongside Caryn in the kitchen.

I imagined discovering the hidden secrets of this coffee cake; secrets that had only been whispered in dimly lit kitchens through the generations.  I was nearly dumbfounded when Caryn pulled out the original clipping of the recipe from a Parade Magazine insert printed some 40 or so years ago! 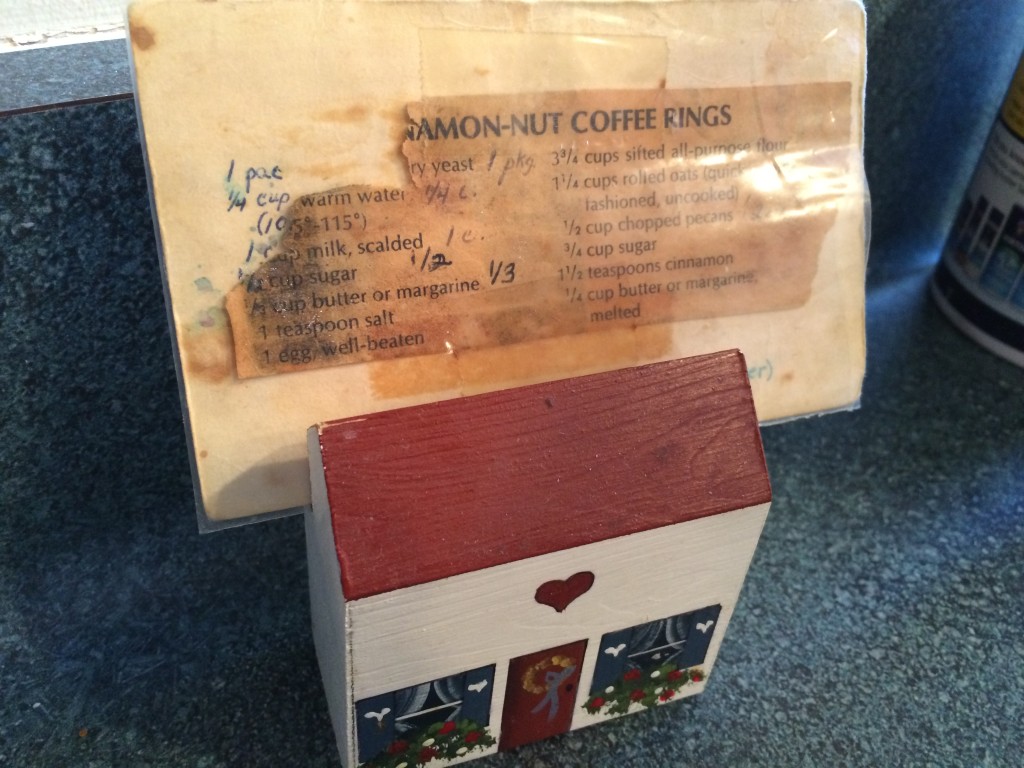 “Hmmmm,” I thought, “Parade magazine?  Maybe this wouldn’t be so complicated after all.”  Still cautious because of the fate that had befallen

Darrell also getting in on the act!

Darrell and his siblings in their failed attempts to make it, I listened and watched attentively.  In short order, it became apparent that Parade Magazine had nothing on Caryn!  Under her gentle command, we fell in line and did as she said.

As a regular bread baker the process seemed pretty straight forward.  It dawned on me that I’d never actually tried making this coffee cake myself.  I hadn’t even bothered to quiz Darrell (or anyone else for that matter) on what had actually gone wrong.  My curiosity was piqued.

There were a few things Caryn insisted on which were out of the norm of my usual bread rituals.  Tout them as secrets if you will.

There were other tidbits she shared as we worked. For instance, you can divide the dough into enough big and little pieces to fit the shape of your bundt pan rather than the 1 1/2 inch dough balls the recipe calls for.

In the end  our coffee cakes (yes, we made two….just in case!) were beautiful!  We didn’t have the vase of daffodils for the center of the cake to make it the show piece that Caryn had for those Easter Sunday meals but we made due with some other late bloomers from the yard. 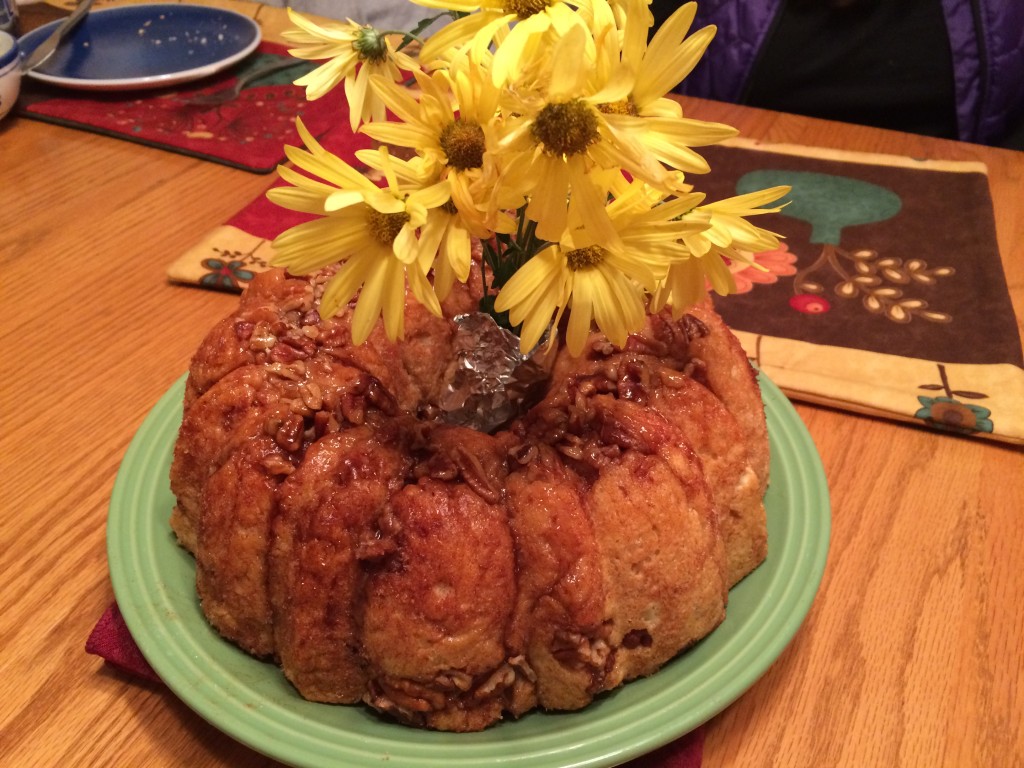 Sharing our finished product, I finally understood what Darrell had been talking about for so many years.  It really was delicious; subtly sweet but tasty!  If you get a nostalgic hankering for something old fashioned and hearty, this would be the coffee cake for you.  There’s nothing floofy about it.

But, as it turns out, it isn’t just about the coffee cake.  I have to admit that part of what I was savoring was the shared experience of cooking with Darrell’s family.

The in-between time is just as important. Darrell’s sister, Jeanine, along with Ava and I worked on gratitude cards while the dough rested. Darrell and my brother in law, Eric, fixed Caryn’s back steps.

We seem to have turned a corner in the making of this family favorite. Since our baking day I’ve adjusted ingredients substituting in Almond Milk and maple syrup for the milk and sugar.  I’m even thinking about modifying it more to turn it into a possible contestant for the Baking with Maple contest at the Genesee Country Museum next month. 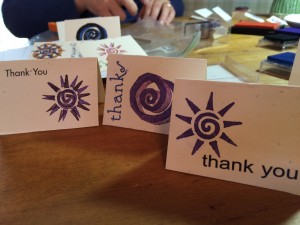 Caryn, if you’re out there reading this in cyber-space, know that I’m thankful for your patience and willingness to have me add this recipe to my repertoire. Beyond that, thank you for raising a son who, along with this famous coffee cake, is also one of a kind.

Hope to see you around the bread bowl one day soon!  In the meantime please post a comment if you try the recipe or have a family treasure of your own! 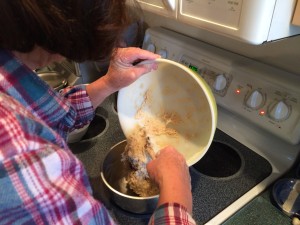 Beat in the softened yeast, egg, and 2 cups flour until batter is smooth.  Add oats and remaining flour.  Beat thoroughly. The batter will be sticky.

Place in large greased bowl.  Cover and let rise in warm place till double in size (about 1 1/2 hours).  Degas the dough (it sounds so much kinder than “punch down”).  Let it rest 10 minutes.

Place 1/4 cup of pecans in the bottom of a bundt pan.  Form the dough, make 16 balls to match the size and shape of the pan (large balls for the larger sections of the pan; smaller ones for the thinner sections).  Alternately you could make 1 1/2 inch balls and just layer them in the pan evenly. 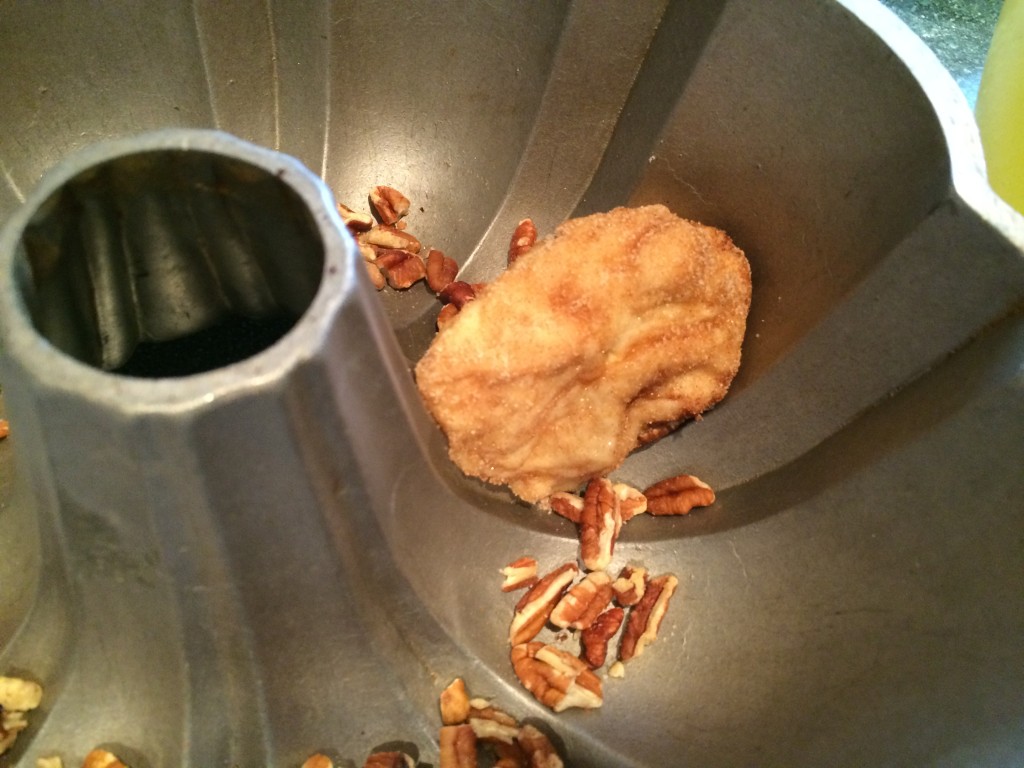 Caryn fits the size of the dough ball to the section in the bundt pan. 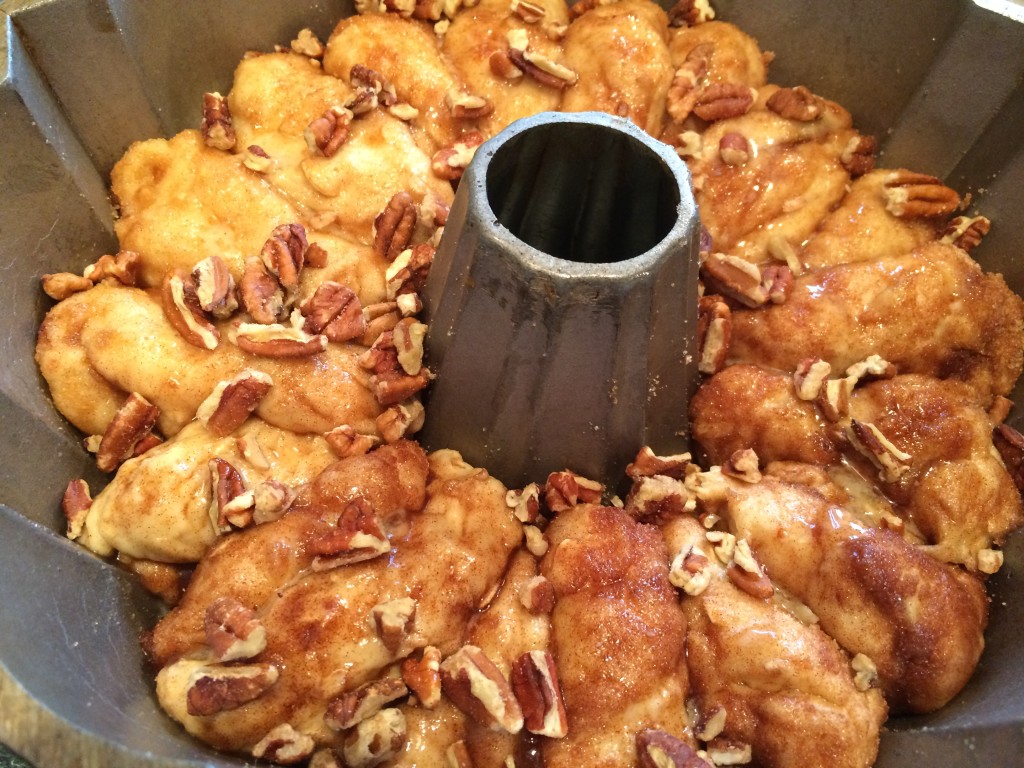 Cover and let rise till double in size (about 45 minutes this time).

Loosen and invert immediately onto a plate.