*This post is a part of my Generations project which was born out of Kneading Life workshops.  Inevitably some participants recount the impact of the food traditions they were raised on with an implied sense of loss which centers around the slipping away of family rituals and a trend that seems to be moving us further and further from time together around the kitchen table.  It’s become clear to me that preserving our food histories is essential. Food is a thread that binds.  As a result, this blog year I’m hoping to capture some of these stories and recipes, whether they’re bread or not, to do my part in preserving them for future generations.

Who hasn’t had the experience at some point in their life when, in that moment you’re about to give up and call it quits, there is a divine intercession of sorts and something inexplicable but true takes place? Whether anyone believes you or not in the telling of it doesn’t matter because now your heart knows that there is something larger than you at work in the world. 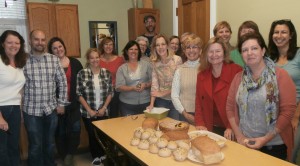 The bread retreat where I first met Susan….and her brittle!

I first met Susan at a bread retreat.  While Kneading Life had not officially been born, I had started sharing the mindful practice of making bread and thought it would be a good idea if each participant came with a mindful dish to pass for our potluck.  Everyone had permission to loosely interpret what that meant to them.

Susan showed up with almond brittle; not just any old almond brittle either.  The golden sweetness she walked in with had a long thread of history into her family’s past.

I added it immediately to my growing list of food addictions which already included assorted breads, a good cup of coffee, a little sweet-something after a meal, and Darrell’s maple infused sweet gherkins.

Susan’s brittle was that good. 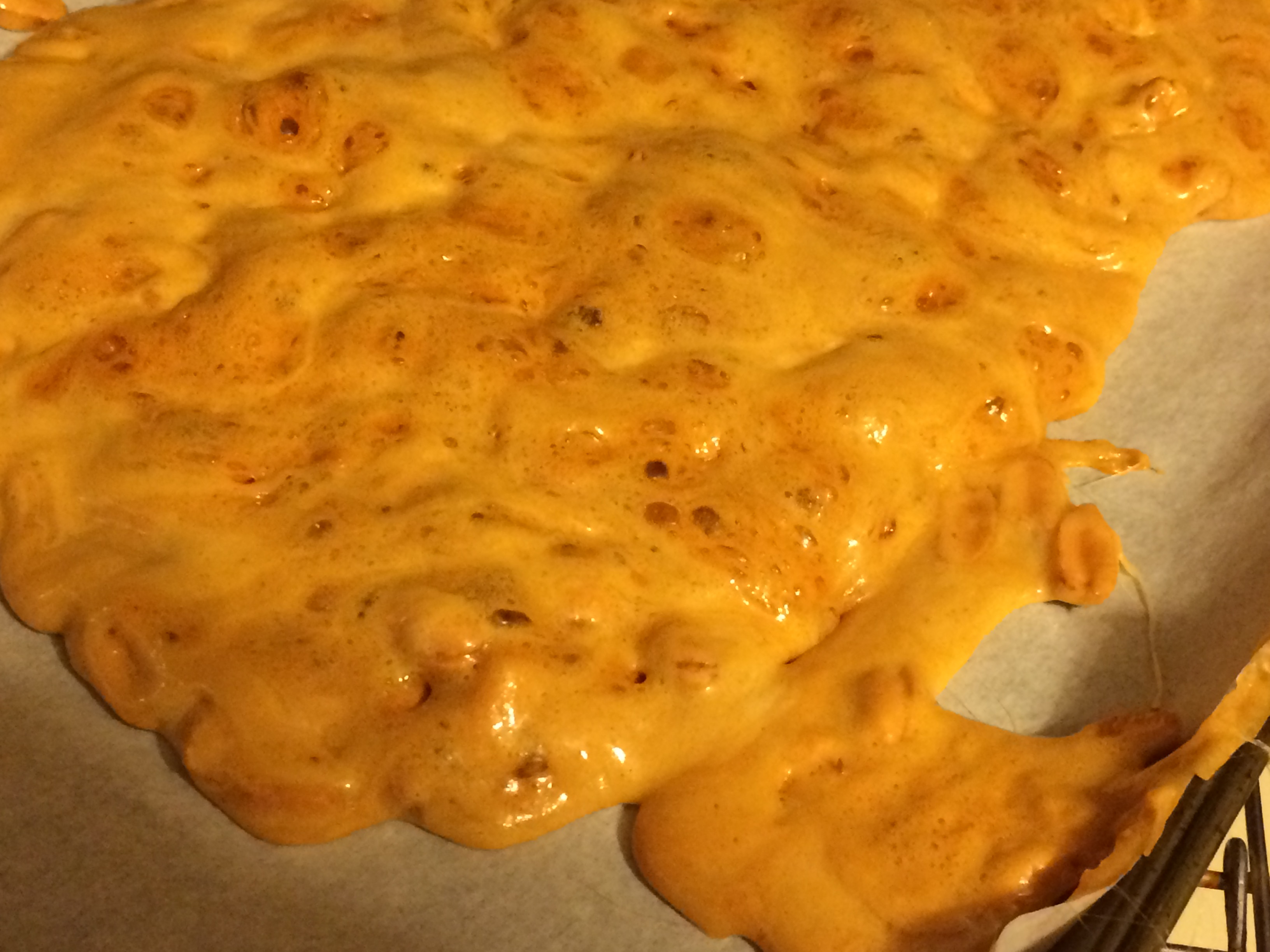 Her story began with her Aunt Donna, the oldest of four girls who grew up in Hilton, New York.  She was a regular, life-long participant in the Sunday family dinners which Susan later became a part of.

Christmas gatherings were a bigger affair.  They included a swell of family members and the ritual of Aunt Donna’s peanut brittle.  Tins and tins of assorted shapes and sizes were filled and placed under the tree as a part of the festivities.  “Every year since I can remember,” Susan recounted, “we were fighting over the peanut brittle…even if you didn’t like it (which, of course, you would never admit) you still joined in to fight over it.  The scuffle was half the fun.  Cousin Mark would always hide someone else’s or tuck an extra under his coat to see if he would get caught.”

Susan with her Aunt Donna at a Christmas family gathering

It was not beyond the scope of possibility that one of the family members might even pretend they hadn’t gotten a tin at all.  Perhaps that’s why Aunt Donna always had a few extras even after the free-for-all; a collection of just-in-case tins.

As a girl, Susan remembered opening up a closet at Donna’s apartment only to have bags of tins fall out.  “It was crazy how many she collected!”

Even crazier was how many she gave away.

For all her generosity, Aunt Donna was not giving away her recipe secrets. Tins had to be returned after the holidays if there was to be the hope of a refill.  Had she been ready to share the recipe, Susan might have been the receiver being that Donna didn’t have a daughter and Susan was growing into her role as family historian.

Donna passed away suddenly on November 5, 2012, before her legacy (and recipe) had been passed on. The Christmas tradition was over.  Donna’s spirit had touched the lives of a myriad of other brittle-receivers including, much to their surprise, the local funeral director.  It seems he wasn’t alone.  Everyone in town told the same story.

In cleaning out her apartment, the recipe was found.  Susan tried to duplicate it.  It took a whole month and pounds and pounds of peanuts. 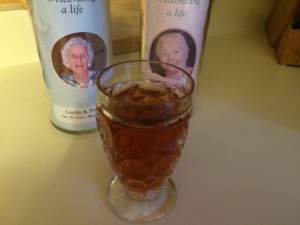 “I failed over and over.  Then one night in my kitchen, I said aloud, ‘This is the last time I am going to try and make this, I can’t ruin another $10 worth of peanuts….’  I poured a juice glass of Carlo Rossi blush just like my grandmother always had then lit the funeral candles from my grandmother and Aunt Donna.  I put them in the kitchen right near the stove and talked to them the whole time I made it.  I cried and stirred and cursed and stirred and called upon their spirits to help me.  It was the first time I got it right!”

Susan surprised everyone that year with Christmas presents from Aunt Donna.

Like her aunt, the same generosity of spirit began erupting from Susan around the holidays.  Beginning in early December, Susan makes a batch of brittle a night (two tin-fuls) and fields phone calls from friends and relatives checking to make sure they’re still on her list. It was that enthusiastic spirit that led her to make us a mindful batch for the bread retreat.  Lucky me.

Food is definitely a thread that binds.  With the passing on of beloved family members the thread remains albeit invisible.  Over time these threads create an intricate weave, sometimes centuries old, which can not only help steady us when the world feels unstable but help us keep perspective.  We are a part of something larger than ourselves. 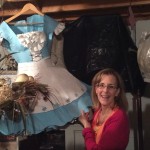 Susan with one of her award winning paper dresses!

You can read more about Susan and her other passion for paper making on her website!

Thanks for sharing this journey with me!  Hope to see you around the bread bowl!

P.S. to Aunt Donna should you be somehow privy to this post:  You’d be happy to know that the seeds you scattered have grown.

And P.S. to my readers:  Susan’s son, Danny, found a treasure in one of Susan’s own collection of tins. This tin, which she garnered for two dollars at garage sale, spent many years amidst other interesting collections in her basement. This tin, which did not contain peanut brittle, had clippings from the early 1800s that led to his final college film project titled Once in a Good Many Million Times.  This tin, like many of us, contained stories of the past.

Susan’s almond brittle is a variation on Aunt Donna’s original.  I’ll post the recipe and a few more brittle tidbits in my next post.  Since peanut brittle is a traditional winter confection it’d be a perfect time to stir up a batch since the Groundhog tells us we’ve a few more weeks of the cold to go.

Check out Kneading Life on Facebook where I’ll be keeping you updated on my recipe progress for the Baking with Maple Contest at the Genesee Country Museum coming up in March.  Why not consider entering along with me? I’m hopeful but realistic about a blue ribbon this year since I’ve won the cake division for the past two but hey you never know…maybe a trifecta is possible?!!

Read my first generations post about The Birchenough Clan and their mom’s infamous coffee cake recipe!