We had a bitterly cold winter in upstate New York that frayed the edges of more than just a few of us. Our house was built by people who were likely still gossiping about Lincoln’s assassination and who must have been a hearty bunch because even now, with insulation and double-paned windows, the house is breathable.  Did they huddle together around the woodstove like Darrell and me during the coldest winter months sharing stories and snippets from good books?

I wonder, too, whether they were the ones who planted the giant maples that grace our front yard. Watching the snow gently fill their branches week after week they whisper a message of hope.  It’s possible to endure. 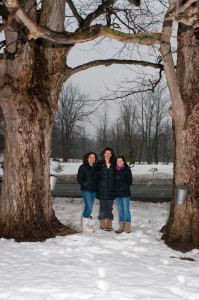 How many friends have gathered through the years under these branches?

The two trees, named The Sisters by some previous owner, have become a part of our land’s lore having grown straight and tall with their branches intermingled in such a way that they never interfered with each other’s growth.  I am comforted somehow by them.

Despite their wide girth, each year when the snow begins to melt and the sap begins to run, Darrell puts just two taps into each of the Sisters.  Though experts tell us they could handle many more taps, Darrell treats them as he does his most intimate friends. He doesn’t want to overburden them. He’s thinking about a long term vision.  Wouldn’t it be nice if someday, long after we’ve moved on, other families could know these trees, too?

Because of the depth of cold that lasted right into March, Darrell and I were keenly aware that syruping season would get off to a late start.  In order for the sap to flow temperatures have to rise above freezing during the day but drop back below freezing at night. 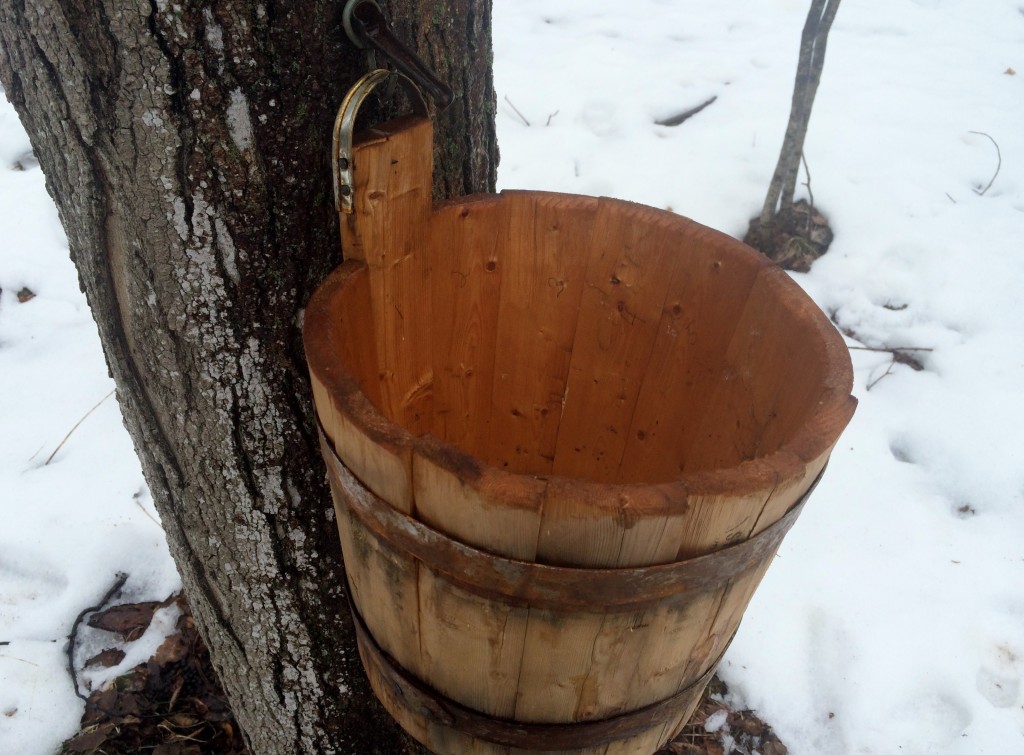 We wondered if the Genesee Country Museum was feeling the pangs of the late season, too, so Darrell and I decided to make the trek to Mumford and see how they were faring for their Maple Festival.  Not only were they undaunted by the rain and cold but their spirit and fortitude warmed us!

You may recognize this camp cook (Sarah) from last year’s post: One Drop at a Time!

We were treated to sugar on snow, given lessons on the Native people who first began tapping the trees in our area, and shown how the first sugar molds were crafted almost as a type of folk art. 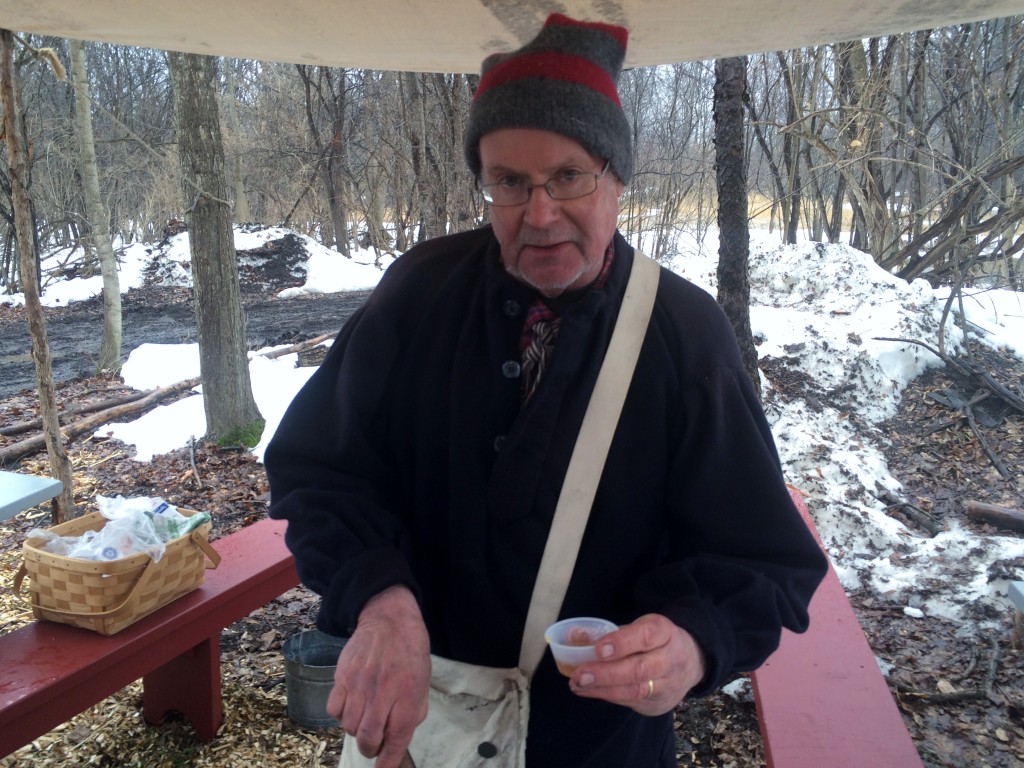 It’s hard not to get roped into their enthusiasm!! The volunteers clearly love what they’re doing.  We found one interpreter, Matt, rigging up an elaborate drip system for his boiling operation.  I could nearly see the wheels spinning in Darrell’s head as he spoke, pondering modifications for the system he’s rigged up in our back yard. 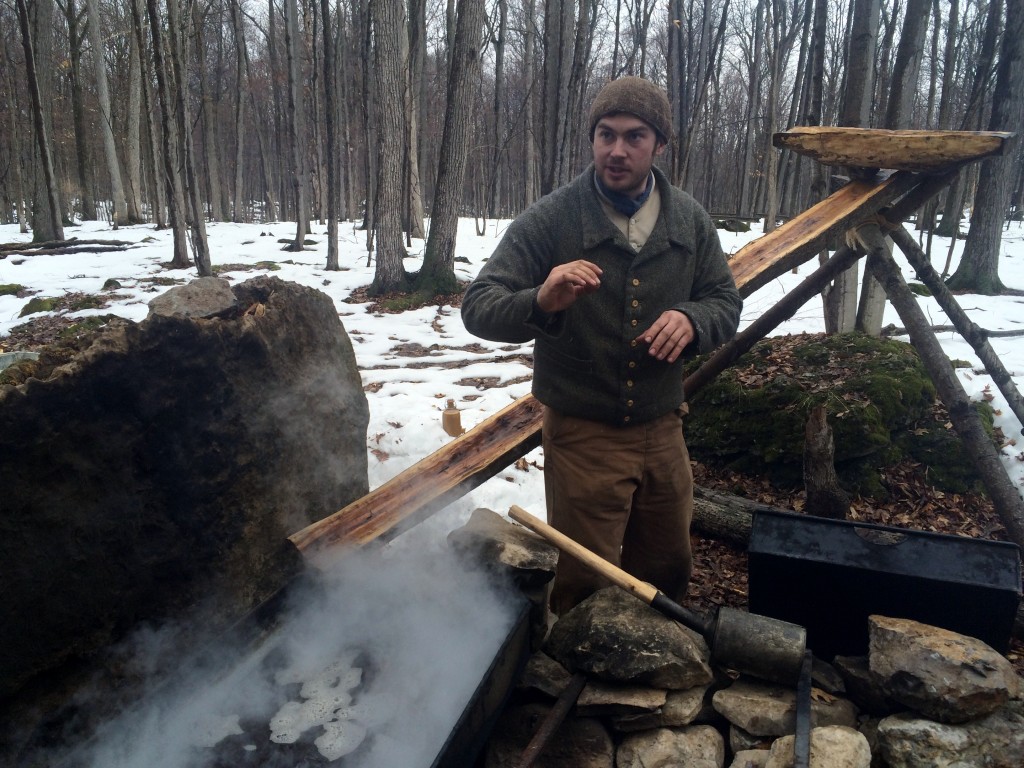 The museum is a gift to our local community preserving our past and inspiring us right into the future. As many of you already know I like to jump into their seasonal festivities by entering their Cooking with Maple contest which is open to everyone and begs only that you modify or create a new recipe using maple syrup as an ingredient.  This year Darrell and I are competing against each other! 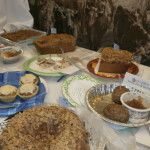 A sampling of the goodies that came in last year!

It’s a great opportunity to experiment a bit with an indigenous ingredient.  Maple trees grow in other places in the world but the Northeastern United States and Southeastern Canada are the most conducive to producing syrup because of the essential weather conditions.  It’s part of our unique heritage here.

While Darrell and I started our own Maple Syrup Day celebration several years ago as a way to gather friends and build community I hadn’t really thought about what this season signifies. Our friend, Amy, reminded us on a recent visit that, “Sugar season marks the end of the freezing time and the sweetness of life flowing back in.  We need to celebrate that!”

Of course we do! 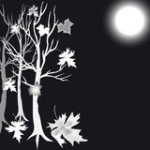 The Iroquois knew this intuitively and celebrated the “maple moon” or “sugar month” which, according to some sources, involved performing a maple dance when the trees were tapped.  They were in relationship with the environment and noticed the nuances of the impending weather shift which meant an easier time ahead.  Who wouldn’t want to celebrate?

Early settlers had their own rituals around “sugar month,” too.  Darrell and I discovered at the museum, that families in the 1800s moved into sugaring camps creating a type of maple dance of their own as they joined together to harvest the sap and boil it into syrup so they’d have sugar stores to last throughout the year. Both the Native people and the early settlers used the materials they had to get the job done.

Darrell is following suit with his make-shift boiling operation and home-spun yurt. 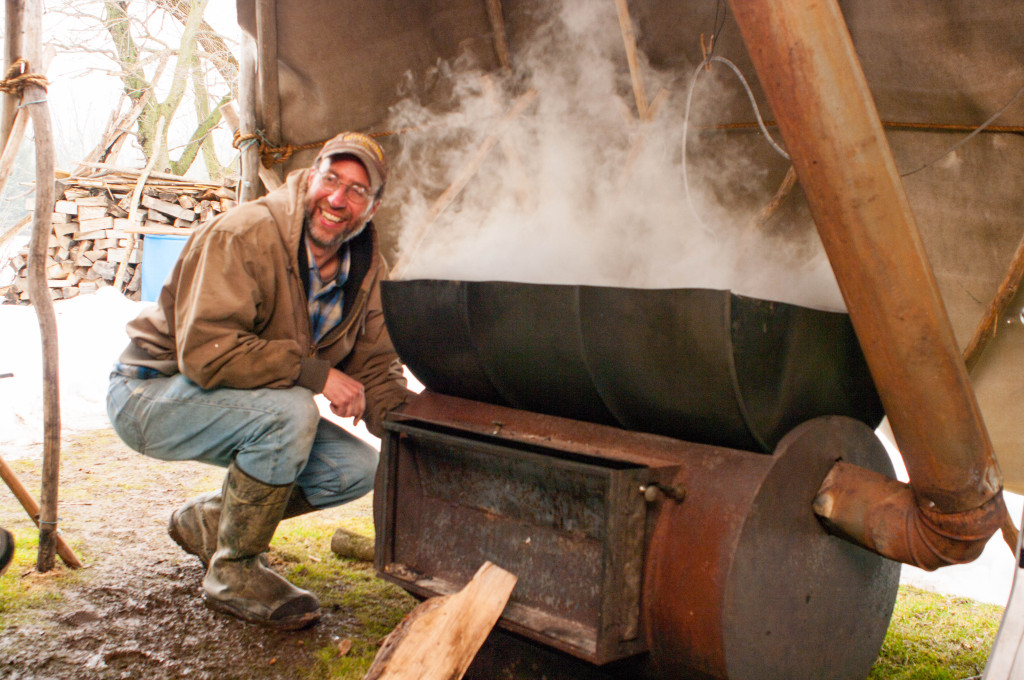 Though there are advanced filtering techniques, evaporators, and even fancy bottles for syrup I have to confess that I’m happy with the Mason jars that Darrell 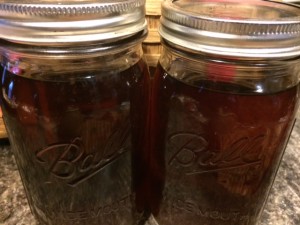 carefully fills despite the bit of “sugar sand” that inevitably settles to the bottom.  His is not the A or B grade that is typically assigned to syrup but rather a smoky and exclusive grade I’ve affectionately named grade “D.”

The history of maple sugaring in upstate New York is deep and flavorful.  I wonder sometimes what unspoken memories The Sisters carry from their hundred plus years of life.  They remind me of what it means to be rooted to the Earth and generously care-take our place in the world. 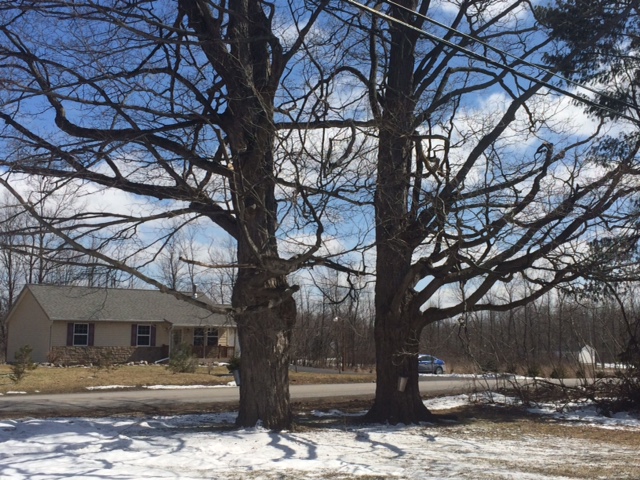 I worry sometimes that I get so busy (much of it self-inflicted busy-ness) that I might lose my connection to the natural rhythms of the world.  Syruping is a short season that isn’t always easily predictable and could easily be missed if Darrell and I aren’t paying attention.

Like the Native people and early settlers, I want to tune into the subtleties around me and note, with gratitude, the seasonal turning of life that is constantly calling me back and reminding me that there is perfection to not only what’s moving in the world outside of me but the one that’s moving inside me, too.

As I pause to savor this transition away from winter, I want to delve into what’s beginning to flow inside of me as Spring crests the horizon and give thanks to the trees that sustain and nourish us in so many ways. 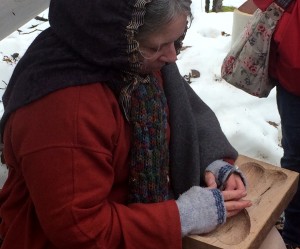 Making sugar molds! I think Darrell could craft me some!

Next weekend marks the second, and last, weekend of the Maple Festival at the Genesee Country museum. It’s a great chance to take time to celebrate our abundance and good fortune as the sweetness of life begins to flow and carry us forward into Spring!  In fact, consider letting your creativity flow, taking out a mixing bowl and experimenting with maple syrup as an ingredient.  If you pull something out of the oven that’s amazingly good I’m sure the museum will find a place for it in their Baking with Maple contest, too!

I hope that you’ll find at least a sliver of time before the warmer weather completely settles in to notice all the little changes that are happening in preparation.  Why not create a little maple dance of Spring ritual of your own? It can’t help but sweeten your life!

Did you miss last year’s post about maple season?  There’s great life lessons in learning how to live life One Drop at a Time.

You can also see the results from last year’s Baking with Maple contest in The Results are In.  You can find out whether my entries earned a ribbon!

Curious about other historic buildings and special events at the village?  Read more about one in Welcome to the Hosmer Inn.

Don’t forget that this year I’m working on a generations project to preserve stories and recipes from families just like yours.  You can read my first post:  Caryn’s Gold (about Darrell’s mom and her recipe!) and my second: Susan’s Brittle.